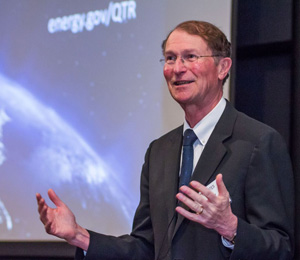 Scientists, economists, and policy-makers should collaborate in creating sound energy and environmental policies in the face of increasingly complex technological systems, said Franklin (Lynn) Orr, under secretary for science and energy at the U.S. Department of Energy, in a talk to researchers, students and corporate leaders at Princeton University on Nov. 20.

Speaking at the annual meeting of the Princeton E-ffiliates Partnership, Orr outlined a wide range of opportunities for improving renewable energy technologies, infrastructure, and electricity storage. Orr also identified key issues in social science as points for improvement, including improving the public perception of wind turbines and ensuring privacy and security compliance of smart grid technology.

“I think there is a better pathway forward now than before,” said Orr, comparing the Department of Energy’s recent technology assessment with one done four years earlier. “Policy makers will be willing to move forward if they can see how they can get there. But research alone is not sufficient-we need markets, policies, and bilateral agreements, which imposes a responsibility on all of us.”

Orr was the keynote speaker at the event, which brought together corporate and academic researchers, students, and policy experts for a day of talks and panel discussions at the newly opened Maeder Hall at the Andlinger Center for Energy and the Environment. The meeting convened two panels of researchers, executives and policy leaders to discuss the future of solar-generated electricity and the economic implications of the recent decrease in oil and gas prices for renewable energy technologies. Talks also addressed experimental self-regenerating batteries, the fluid dynamics and design of wind turbines, the role of behavioral research in environmental policy, and the benefits of a science-based approach to creating environmental policies in the European Union. 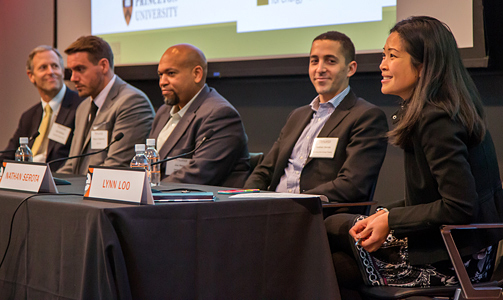 “There are some decisions that only policy-makers can make, but science can help us agree on obviously beneficial directions to pursue,” said Fabian Wagner, the Gerhard R. Andlinger Visiting Professor in Energy and the Environment and a senior research scholar at the International Institute for Applied Systems Analysis in Austria. Wagner highlighted how information flow in both directions between scientists and stakeholders can help to define cost-effective and efficient environmental regulations. He illustrated this with the design of recent E.U. regulations on air pollution, which are projected to extend the average lifespan of citizens by one month at a cost of only $8 per person a year.

Sander van der Linden – a postdoctoral research associate and lecturer at the Department of Psychology, the Woodrow Wilson School of Public and International Affairs, and the Andlinger Center – described how behavioral science can offer low-cost and scalable strategies to implement effective environmental and energy policies. He cited a study that he conducted at Princeton in which he found that incoming students who were given a free reusable water bottle were more likely to reduce their consumption of bottled water and to support a campus ban on plastic water bottles.

“We can leverage behavioral insights, such as the power of intrinsic motivation and group norms, to create actionable policy recommendations that can improve public engagement with sustainability,” he said.

The event concluded with a poster session highlighting the multidisciplinary research of Princeton students.

The E-ffiliates annual meeting facilitates conversations between university researchers and industry partners on mutual interests in energy and the environment, said Professor Paul Chirik, associate director for external partnerships at the Andlinger Center and the Edwards S. Sanford Professor of Chemistry. “Oftentimes, the industrial visitors engage in areas outside their immediate expertise or fundamentals while the academics gain important calibrations to problems faced on scale or in a commercial setting,” Chirik said.

Such collaboration is especially necessary in the energy sector, emphasized Orr as he presented an overview of the Department of Energy’s 2015 Quadrennial Technology Review during his keynote speech. Scientists, economists, and policy-makers need to look beyond their own research and consider the energy infrastructure as an intertwined system with multidisciplinary components. Orr said such concerted efforts could diversify primary energy sources, lower costs and increase efficiency of renewable energy.

Orr likened cutting-edge advances in the energy sector such as 3D printing, photovoltaic materials, and sophisticated sensors to the impact of the steam engine in pushing forward industrialization in the 19th century. Unfortunately, he said, the innovations needed to make the steam engine truly useful and economically viable on a large scale only occurred 300 years after its invention. “We can do it faster than that,” he said. “We just need to make up our minds that we can.”