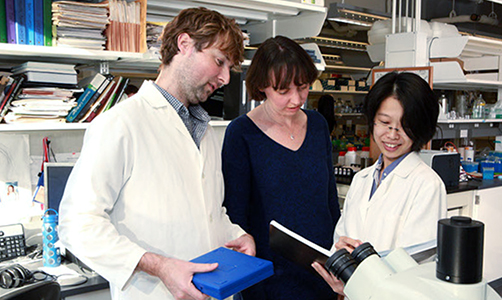 With its twisting branches and delicate curls, the lung seems as much a natural work of art as a functioning organ.

Now Princeton researchers have observed the artistry unfold in a petri dish and have arrived at a surprising conclusion about the forces that help shape it.

In a series of recent experiments, researchers in the lab of Celeste Nelson, a professor of chemical and biological engineering, have found that airway branching in the developing lung is regulated in part by the mechanical forces experienced by these embryonic tissues. This insight adds a previously unexpected mechanism to the standard theory that the airway branching pattern is controlled by a closed genetic program, hardwired in our DNA.

“Our work indicates that physical forces can determine the locations where new branches form within the developing lung” said Victor Varner, a post-doctoral researcher in chemical and biological engineering and the lead author of one of two papers recently written on the subject.

The results have long-term implications for understanding developmental disorders in babies or treating later-stage growth disorders such as cancer, or in developing lab-grown replacements for human organs.

“Our work underlines the fact that tissues and organs are physical objects that are sculpted in the embryo by mechanical forces,” Nelson said.

The lung’s array of twisting branches may appear to be random, but it follows a consistent pattern. Previous work in the field had suggested that this stereotyped pattern is determined by a specific spatial distribution of biochemical molecules, expressed within the embryonic lung tissue. Scientists had focused on the distribution of one molecule in particular, fibroblast growth factor (FGF) 10, which was thought to direct the growth and branching of the developing airways. 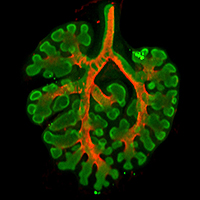 Varner and Nelson wondered if these biochemical signals were the only way to control the airway branching pattern. In one experiment, they dissected a small piece of lung tissue from an early mouse embryo and separated the developing airways from the adjacent cells expressing FGF10, thereby disrupting the biochemical pre-pattern thought to control the formation of new branches. These fragments of developing airway were then cultured in a three-dimensional gel and, remarkably, continued to grow and branch in the laboratory.

“Once we’d disrupted the pre-pattern of growth factors, given my background as a mechanical engineer, I wondered if a physical mechanism might be controlling the formation of new branches in culture,” said Varner, whose article describing the study was published on July 28 in the Proceedings of the National Academy of Sciences.

Varner said the researchers determined that a mechanical instability, similar to the buckling of a beam or column under compressive force, was generated within the growing airway and that this instability dictated where new branches formed along the tissue.

“This work highlights the role of mechanical forces during development,” he said. “In addition to biochemical signaling, physical cues also control how developing organs self-assemble in the embryo.”

Varner said that for their next experiment, the researchers would like to examine how mechanical stresses affect branching in the intact embryonic lung, a far more complex environment than their simplified 3D culture system. Eventually, they hope to understand how physical forces contribute to branching abnormalities that underlie a host of congenital birth defects.

In a related but separate study, researchers in Nelson’s lab also determined that airway bifurcations in the developing lung are physically sculpted by a layer of smooth muscle, which wraps around the embryonic airways. This work, which was published Sept. 28 in Developmental Cell, made use of a line of transgenic mice, which have cells that glow fluorescently whenever they express genes characteristic of smooth muscle tissue. This enabled the researchers to track the motion of smooth muscle cells dynamically in cultured embryonic mouse lungs.

Nelson and colleagues found that smooth muscle cells accumulated in the cleft region of newly formed bifurcations, where the parent airway branches at its tip to form two new daughter branches. To investigate this further, the researchers found that when smooth muscle development was disrupted experimentally, the airways no longer split into two branches.

These results further highlighted the role of mechanical forces during lung development and revealed that patterns of smooth muscle “act like a girdle to force the developing airway into the needed shape,” Nelson said.

In addition to Nelson and Varner, the authors of the PNAS article included: James Gleghorn, a postdoctoral researcher in chemical and biological engineering at Princeton; Erin Miller and Derek Radisky of the Mayo Clinic Cancer Center. The research was supported in part by the National Institutes of Health, the National Science Foundation, the David and Lucile Packard Foundation, the Alfred P. Sloan Foundation, and the Camille and Henry Dreyfus Foundation.

Besides Nelson and Varner, the authors of the Developmental Cell article included: Hye Young Kim and Mei-Fong Pang, post-doctoral researchers in chemical and biological engineering at Princeton; Lisa Kojima, an undergraduate student in chemical and biological engineering; Erin Miller and Derek Radisky of the Mayo Clinic Cancer Center. The work was supported in part by the National Institutes of Health, the National Science Foundation, the David and Lucile Packard Foundation, the Alfred P. Sloan Foundation, the Camille and Henry Dreyfus Foundation, and Susan G. Komen for the Cure.