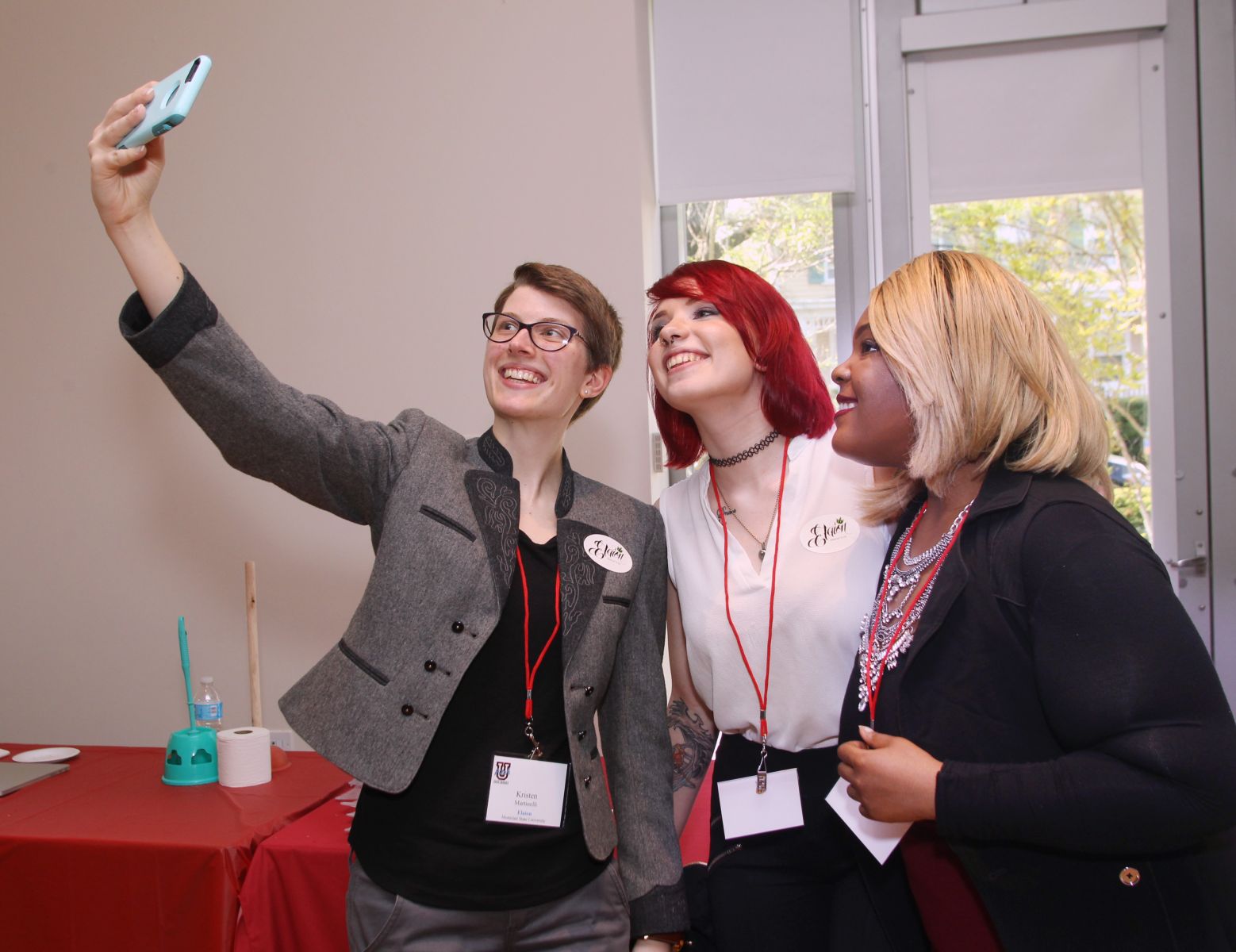 Sophie Kunert, whose bandages are designed to soothe skin around new body art, stretched out her left arm, where a cockatiel peered through a spray of foliage. “If you don’t have a tattoo, you probably know someone who does,” said Kunert, a student at Montclair State University.

Colin Lualdi, a senior at Princeton University, who is deaf and speaks in sign language, explained through an interpreter why he and fellow students are creating an online school to teach American Sign Language.

Rachel Catena of Fairleigh Dickinson University described the essence of her idea this way: “Trust your gut and save the bees.” She wants to produce a healthy drink, called Buzz, with wildflower seeds embedded in the label for consumers to plant.

Undergraduate teams from 13 of the New Jersey’s four-year institutions of higher education took part recently in UPitchNJ, a competition for cash prizes, coaching sessions with successful entrepreneurs and perhaps a chance to catch the attention of an investor.

The contest, which was held April 28 at Princeton University’s Friend Center, was hosted by the Keller Center for Innovation in Engineering Education and sponsored by the New Jersey Collegiate Entrepreneurship Consortium, which represents the entrepreneurship education programs at New Jersey’s four-year colleges and universities.

Each team was given five minutes to make their pitch. For the next three minutes the judges peppered them with difficult questions about market analysis, competitors’ products and the path to profitability. Nevertheless, the contest was more of a celebration of the state’s ingenuity than a tension-filled episode of “Shark Tank.”

Mung Chiang, director of the Keller Center and the Princeton Entrepreneurship Council, told the audience that hosting the contest fit perfectly with the University’s mission to foster entrepreneurial mindsets.

He spoke about the strides the University has made in supporting innovation including creating a center that provides services for business startups and a certificate program in entrepreneurship that enrolled its first students this past fall. “Princeton is recognizing the importance of the whole village,” he said.

“This is lightning speed for a place like Princeton to be making these kind of investments,” added Richard Myers, vice provost for academic and budget planning. 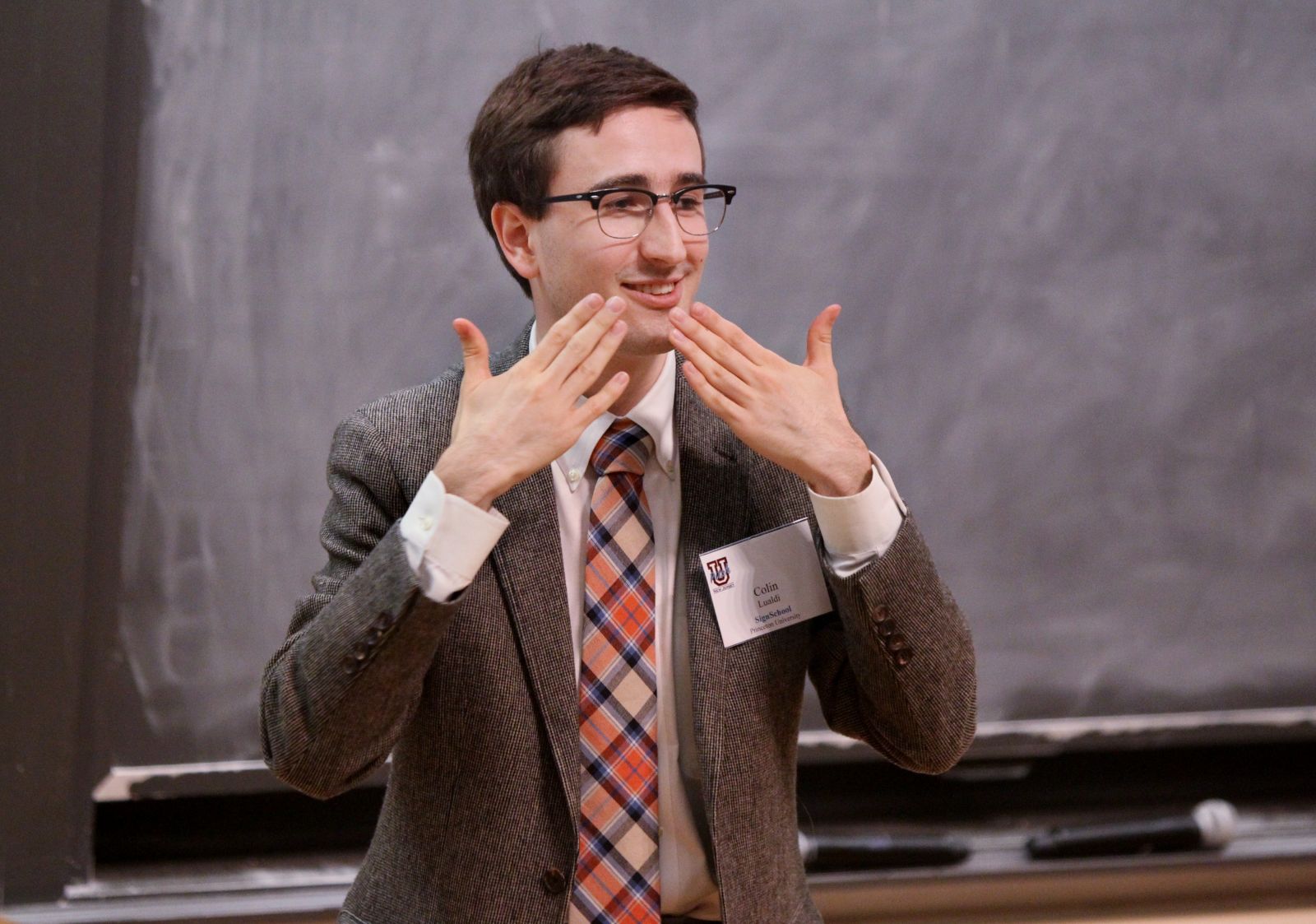 The winning team, from Rutgers University, won $1,500 plus coaching sessions with two of the event’s sponsors, law firm McCarter & English and TechLaunch, the state’s first technology accelerator. The Rutgers students are starting a business that allows students to fundraise for their higher education expenses.

The business, which they’ve named Pedul, transfers the contributions directly to the school and takes a 5 percent fee, founder Kayla Jackson told the judges. “The government’s not doing what it used to – that’s why we the people created Pedul,” Ms. Jackson said.

The Princeton team, SignSchool, won $1,000 and coaching sessions with the New Jersey Innovation Institute at NJIT, and the NJ Tech Council, both event sponsors. Its brochure described the enterprise as “built by a collaboration of deaf and hearing innovators who are passionate about American Sign Language.”

The third-place finisher, Trend Pie, is the brainchild of Seton Hall University student Victor Ricci. The company prepares public relations materials and pays “influencers” to post the content on Twitter, Snapchat and Instagram. Ricci will receive $500 plus a coaching session with entrepreneur David Stengle of Startup Grind Princeton, part of the largest global startup community and an event sponsor.

The students behind Elaion, Kunert’s team, described as a holistic tattoo aftercare solution, won $1,000 and a coaching session with Greg Olsen, Entrepreneur-in-Residence at Princeton University.

Rachel Catena of The Buzz, who conceived her healthy drink as a way to reduce dependence on sugar-laden sports drinks but also to save the bees by planting wildflowers, was awarded a $100 Starbucks Gift Card “since java fuels startup teams,” according to the event’s program.

In addition to the sponsors that have agreed to coach the winning teams, WithumSmith+Brown, American Entrepreneurship Today, HeliumIQ, and Inc. magazine supported the event.

Eric Schurenberg, president and editor-in-chief of Inc., who gave the keynote address, spoke about the qualities of a successful entrepreneur. “Arguably it’s not just something in your blood. It’s something in your DNA,” he said.

The St. Peter’s University startup generated the most good-natured laughter. That proposal, called Social Throne, was depicted cryptically in the program as an “E-Commerce/Sharing Economy connecting people with a certain resource with those who need it.”

What does Social Throne do? Well, it works along the lines of Airbnb but instead of renting out bedrooms, its mission is to rent out bathrooms in Manhattan at $2 a visit.

Devin Varela, a freshman, said Social Throne would appeal to the “1.9 million millennials walking around New York City.” He spoke about the scarcity of bathrooms in Manhattan and the 20,000 to 30,000 citations a year for public urination.

To bolster his argument, Varela described the unsanitary conditions of the public bathrooms. “One in five people in a public restroom don’t wash their hands,” he said in disgust.

While the judges were a little dubious that those receiving summonses for public urination would be willing to pay for a private bathroom, no one ruled anything out either. The theme of the day was to dream big, and that means that any one of the ideas could go from university incubator to multi-billion dollar business.

Susan Scherreik, director for the Center for Entrepreneurial Studies at Seton Hall University and chair of the UPitchNJ planning committee, put it this way:

“We want your venture to get noticed by potential investors.” 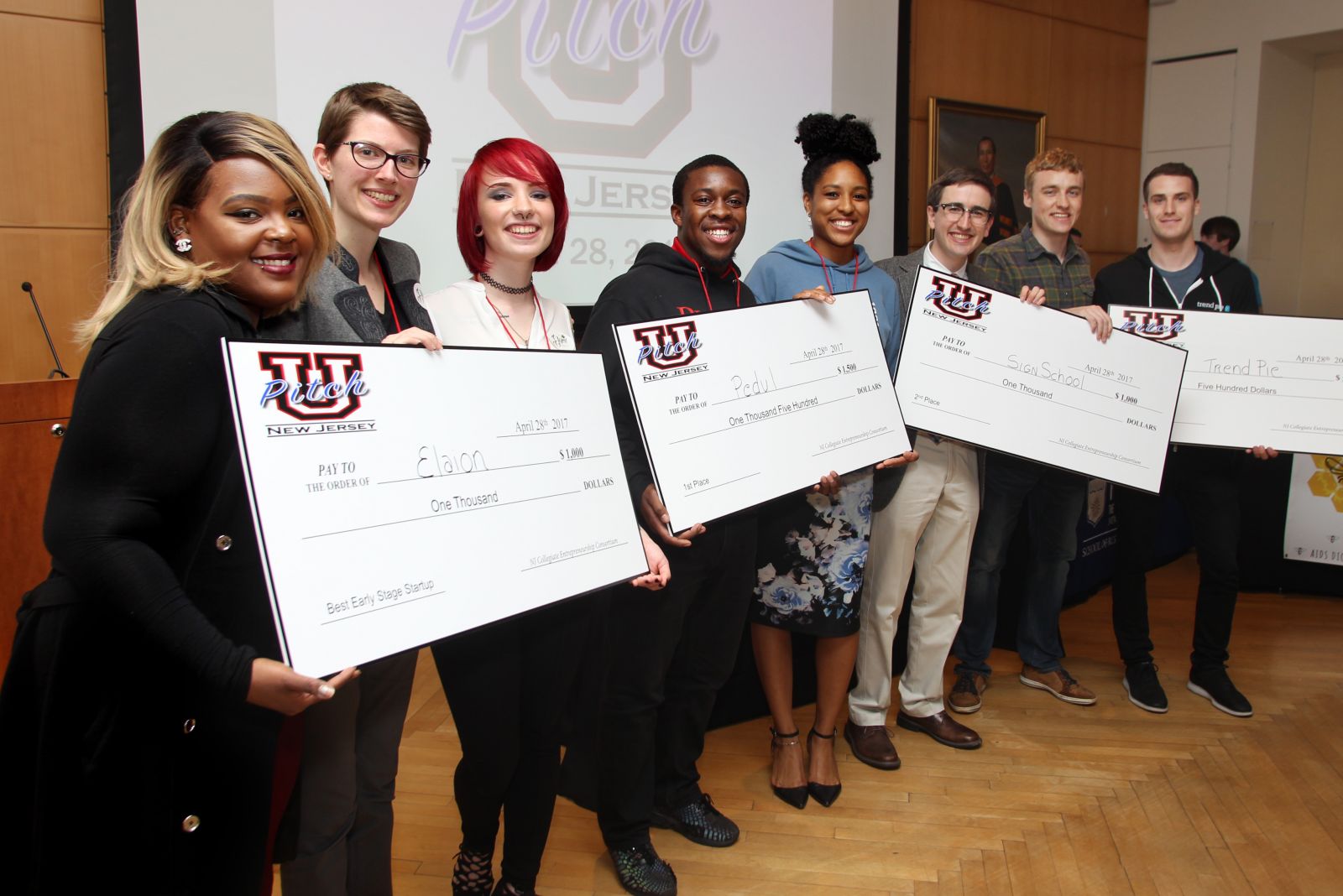