As technology intertwines global societies and international tensions increase, the world needs political and economic structures larger than nation-states, including a possible "secular 10 commandments" of shared values, former president of Poland Lech Walesa said in a speech at Princeton University on April 23. 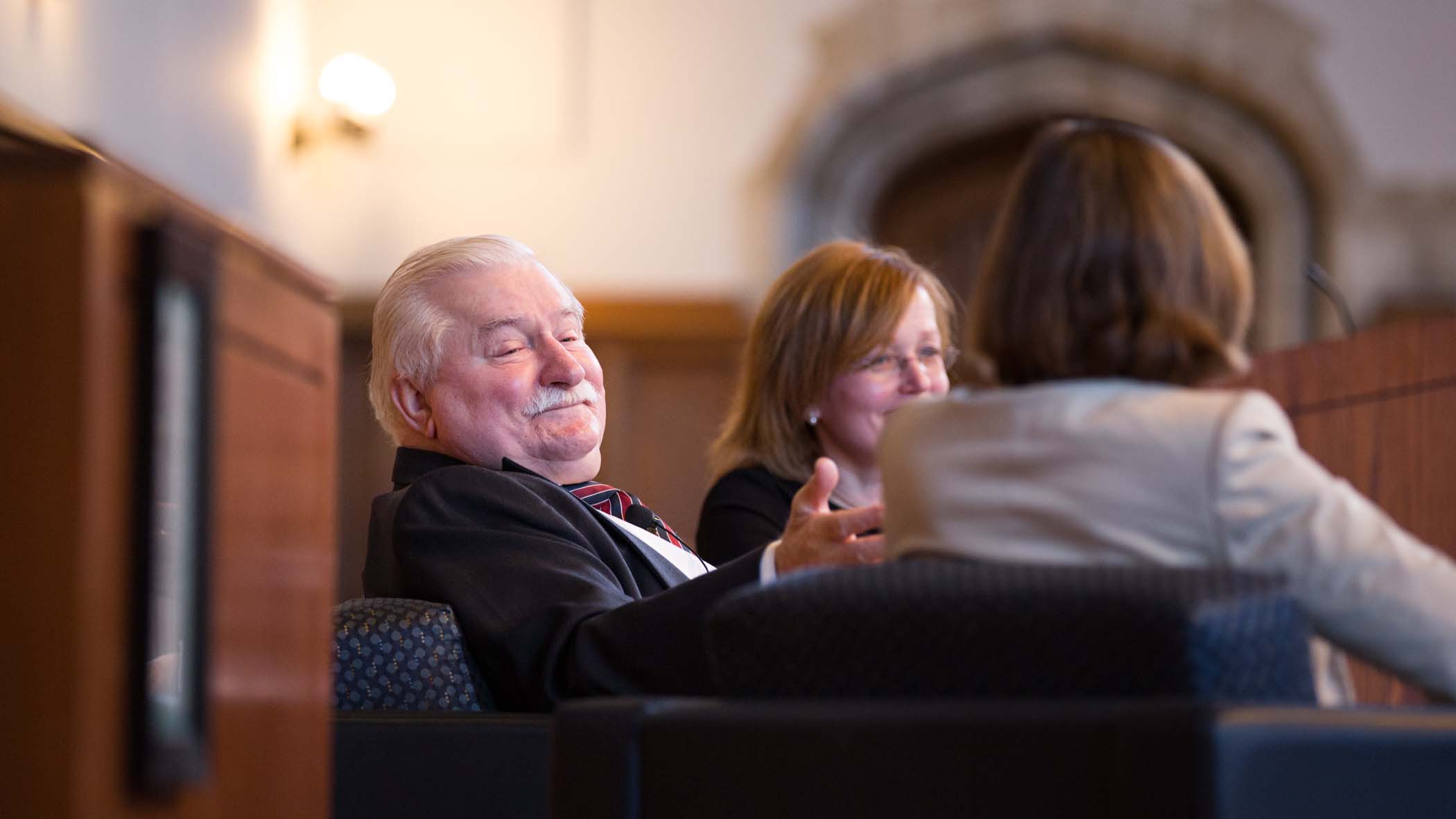 “You are now the only superpower,” Walesa said in Polish, urging an audience of nearly 500 at the University’s McCosh Hall to take the lead in building a new global understanding. “You see what is happening in the world. You carry a special responsibility for this world.”

Walesa started his career as an electrician and won the Nobel Peace Prize in 1983 for his work in founding and leading the insurgent workers’ union, Solidarity. The event was organized by the Keller Center for Innovation in Engineering Education and co-sponsored by the Princeton Institute for International and Regional Studies and the Princeton University Public Lectures. He spoke in a question-and-answer format with Keller Center Director Margaret Martonosi, and was introduced and translated by Marzenna James, lecturer in politics and international affairs.

“Our generation managed to get rid of many divisions,” Walesa said. “There were economic divisions. There were borders between states we couldn’t cross.” However, the fall of communism and the opening of societies and markets “is only half the story,” he said. “The fact that we have gotten rid of these divisions is good. But what have we built in its place?

“Through the end of the 20th century, we lived in states, in countries, and everything revolved around this nation-state philosophy. But in the meantime, we have invented technologies that do not fit into these borders anymore,” Walesa said.

Now, he said, is the time to invent larger structures. Any new order must build on and reconcile three foundational ideas: freedom and human rights; shared values; and an agreement on an economic system. Regarding shared values, he acknowledged the difficulty of agreeing but proposed working toward “10 secular commandments” that will hold for all people. He said, to laughs from the audience, that the economic system certainly should not be communism, but also proposed that it should not be completely freewheeling capitalism.

“Me, as a revolutionary, I lack answers to these questions,” he said. “Now I come to you and want to encourage you to go on with research and thinking.”

In response to questions from Martonosi, the Hugh Trumbull Adams ’53 Professor of Computer Science, and the audience about the role of social media and other technology for social movements, Walesa declined to speculate about how the Solidarity movement would have been different with such rapid communication at its disposal. However, he noted that today’s communication technology is not entirely positive and has damaged people with false attacks.

He likened the advent of social media to the first arrival of cars on roads. “As more cars appeared on the road, it was necessary to take back freedom and introduce international traffic rules,” he said. “And at that moment, do you know how much freedom was taken away from people on the roads? Today we have freedom of expression but it is not incompatible with the rules of a communal freedom.” 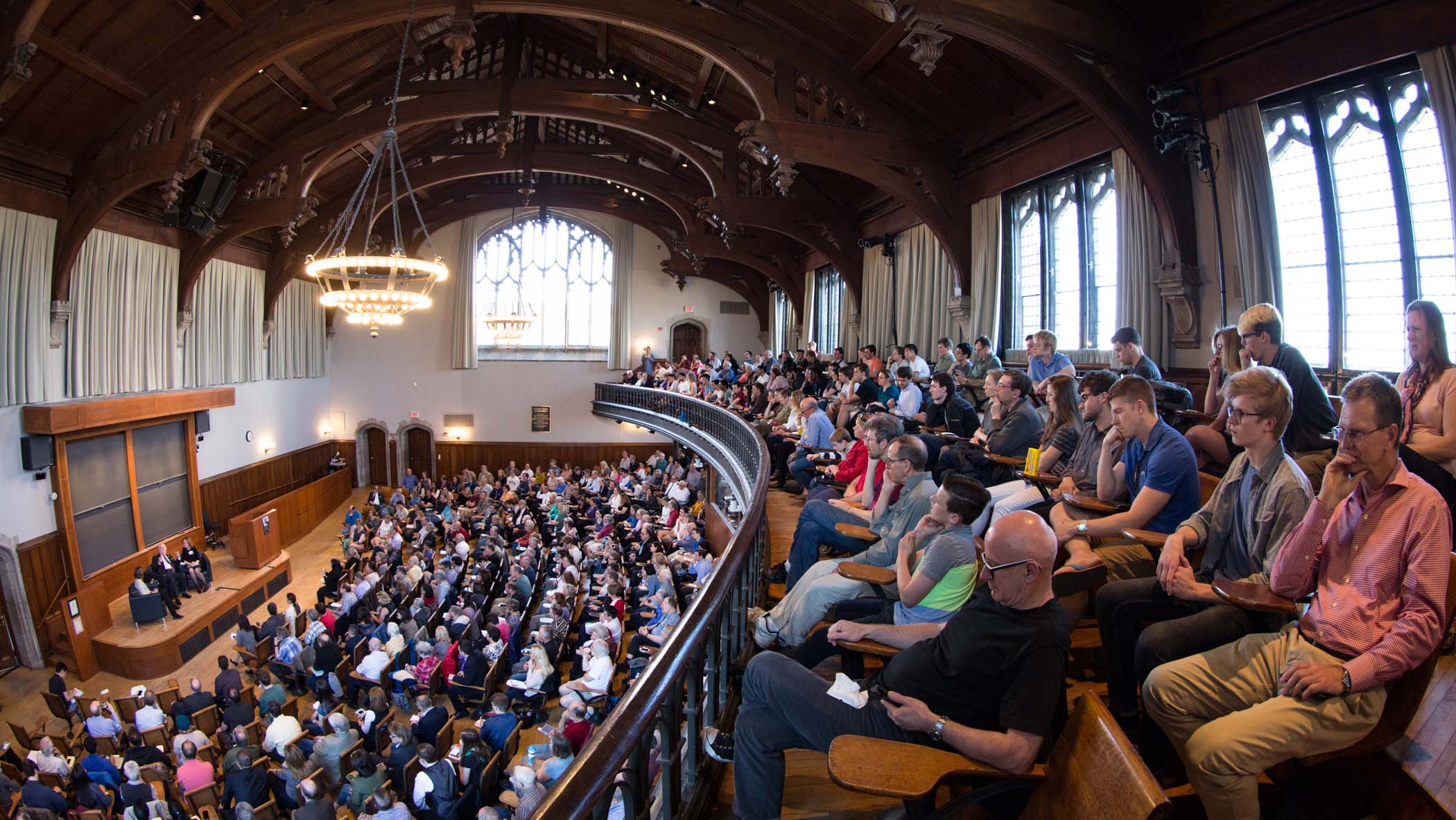 In her introductory remarks, James said that the many books, plays and movies written about Walesa cannot fully capture his personal courage or positive impact on the world in leading Poland in a peaceful exit from communism that culminated in joining the European Union. “For decades, he risked his life and lives of his family to lead a peaceful, nonviolent revolution against communism,” she said. “With appeals to the conscience, the soul, the constructive values, he moved millions to make Poland – as well as the world – more peaceful, secure and free.”

The audience received Walesa warmly, giving him a standing ovation as he entered and briefly chanting his name.

Walesa, often directing his remarks to students, urged young people to take advantage of their education and fresh perspectives to take on the very biggest challenges. He said that if he, a worker from a small village with a wife and children, could play a role in ending an entrenched and oppressive system, then young people can also meet monumental challenges.

“My generation cannot think of challenges of a new era because we are weighed down by our experiences, the experiences of war,” he said. “But you, the youth, without being weighed down by historical experiences ‚Ä¶ you shall find answers and respond to challenges we face. It is not difficult. Believe in yourselves. ‚Ä¶ The world needs you.”