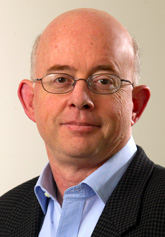 Advances in medical imaging have added a new dimension, literally, to the research of Peter Ramadge, chair of electrical engineering.

Rather than working with two-dimensional videos from cameras (his longtime area of expertise), Ramadge is analyzing three-dimensional movies of brain activity that are collected by a functional magnetic resonance imaging (fMRI) scanner. His work, in collaboration with the Center for the Study of Brain Mind and Behavior of the newly created Princeton Neuroscience Institute, may advance the use of imaging data in clinical practice to recognize depression and other disorders.

The focus of Ramadge’s work is to devise a reliable way to compare fMRI data from multiple subjects, despite the fact that no two brains are identical in shape and structure. This will ultimately provide much more generalizable information about brain states, and therefore a way to determine if they are abnormal. 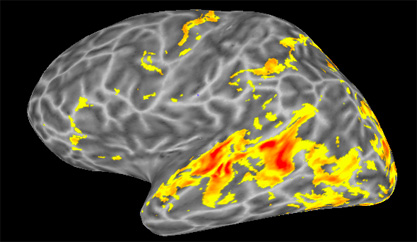 While others have adjusted fMRI images based on the anatomy of different inpiduals, Ramadge’s approach is unique in that he is doing so based on differences in their patterns of brain activity. “This is a totally unsolved problem,” said Jonathan Cohen, the Eugene Higgins Professor of Psychology and co-director of the neuroscience institute. “Peter is contributing to work that is really groundbreaking-he’s a pioneer.”

Ramadge analyzed fMRI data gathered from eight subjects as they watched the film Raiders of the Lost Ark. Although all subjects experienced the same visual stimuli, the data are not identical, given each person’s unique “brain fingerprint.” Ramadge worked to smooth away these differences in collaboration with Benjamin Singer of the neuroscience institute, electrical engineer Mert Sabuncu *06 and James Haxby, professor of psychology.

The data obtained from a single subject can contain information from up to 100,000 points, called voxels (the 3D equivalent of pixels on a computer screen), each repeatedly sampled over time. The method devised at Princeton aligns the data from two different subjects functionally, rather than anatomically, by finding voxels that display similar patterns of activity. The ultimate result is 100,000 matched pairs of voxels, which are usually located in similar, but not identical, regions of the subjects’ brains.

“I’m very interested in the next step,” Ramadge said. “Now that we have a tool to align regions, we can ask questions about what brains have in common.” Computer science professors Robert Schapire and David Blei are addressing similar questions about classifying fMRI brain images. They are collaborating with Kenneth Norman, assistant professor of psychology and member of the Neuroscience Institute.