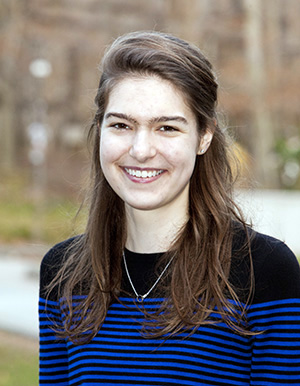 Kaitlin Stouffer, a computer science major, was one of two Princeton seniors named recipients of the Daniel M. Sachs Class of 1960 Graduating Scholarship, one of the highest awards given to Princeton undergraduates.

Stouffer will work for a year in South Africa as a Sachs Global Scholar, contributing to research on drug-resistant tuberculosis by using her computer science skills to develop new ways to analyze genetic data. Her classmate Stephanie Tam, an English major, was named a Sachs Scholar at Worcester College, the University of Oxford, where she will pursue postgraduate degrees in postcolonial and world literatures and evidence-based social intervention.

The Sachs Scholarship is intended to enlarge each recipient’s experience of the world by providing the opportunity to study, work or travel abroad after graduation. While most Sachs Scholars have studied at Worcester, others have chosen programs or projects elsewhere. Stouffer’s selection as the first Sachs Global Scholar continues that tradition while marking an elevated commitment to fund a Global Scholar each year alongside a Sachs Scholar at Worcester, said David Loevner, chair of the advisers to the scholarship.

Stouffer, of Potomac, Md., will work at the K-RITH Institute in the South African coastal city Durban, building a computerized prediction mechanism that will use machine-learning algorithms and other tools to help determine which medications a strain of tuberculosis is resistant to based on its genetic makeup. The goal is to allow for tuberculosis patients to be treated more effectively at an earlier point in the disease. That could slow the spread of drug-resistant tuberculosis, which is most prevalent in the developing world.

Stouffer, who is planning a career as a physician-scientist, wants to extend her work beyond the lab, too.

“I also hope to immerse myself in the local culture and engage with the patients at the nearby King George V Hospital – particularly those who are suffering from the cases of TB I’m hoping to help prevent,” Stouffer said. “Though technology has done wonders for our current society, it’s often easy to lose touch with the individuals one is trying to help with his or her research, and so in an effort to maintain that ‘human face’ of research, I plan to shadow the doctors on their ward rounds and volunteer as much as possible at that local hospital.”

In addition, Stouffer plans to work with the Umkhumbane Schools Project to promote the study of science, technology, engineering and math among young women in KwaZulu-Natal province.

“Ultimately, I hope to help people achieve their dreams, whether that means helping them to overcome an illness, or acting as an adviser and mentor to help them discover their own interests and ambitions,” Stouffer said.

The Sachs program offers Stouffer the opportunity both to prepare for her future and to make significant contributions to research now, said Margaret Martonosi, Princeton’s Hugh Trumbull Adams ’35 Professor of Computer Science and Stouffer’s thesis adviser.

“Kaitlin’s long-term career goal is to fuse medical science with computer science, and the collaboration with K-RITH will offer a very real opportunity to apply such approaches to a problem of pressing importance,” Martonosi said. “At a broad perspective, the Sachs program is giving her the opportunity to immerse herself in a ‘new place’ both geographically, South Africa, and intellectually, the intersection of public health and computer science.”

Stouffer is a member of the Phi Beta Kappa Honor Society, the Tau Beta Pi Honor Society and received the Shapiro Prize for Academic Excellence for her freshman and sophomore years. She has held internships at Google and Microsoft, and was awarded the Accenture Prize in Computer Science. She has also done research at the Princeton Neuroscience Institute and Oxford.

Classmates and friends established the scholarship in memory of Daniel Sachs, who starred in football and lacrosse at Princeton before attending Worcester College as a Rhodes Scholar. He died of cancer at age 28 in 1967. The award is given to seniors who best exemplify Sachs’ character, intelligence and commitment, and whose scholarship is most likely to benefit the public.