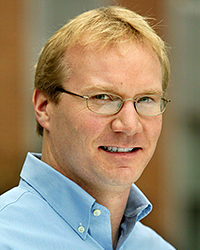 A career as a research scientist has honed Mark Zondlo’s skills of observation and analysis, and last year, he decided to put those talents to a different use by starting a business.

The technical part of the plan, to build and market portable greenhouse gas sensors, is based on scientific techniques that Zondlo, an assistant professor of civil and environmental engineering, and his co-researcher, Lei Tao, developed at Princeton over several years. But the business end is grounded in a new start-up methodology that is now being used to teach Princeton undergraduates, among many other groups.

Called the Lean Launchpad, it provides assistance for entrepreneurs who want to start a company with a minimal amount of capital investment. The program, which organizes and links various aspects of a startup business into a coherent approach, relies heavily on collecting data such as customer preferences and possible markets.

Zondlo, who at first balked at the requirement to enter pages of customer interviews into the computer, said Launchpad has been invaluable. He describes it as a scientific method for startups because it is a way to gather and analyze data to produce a successful business plan.

“We think like scientists; we have hypotheses and we test them,” he said. “The same methods should work for startups.” 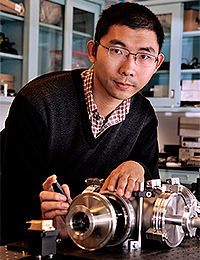 Princeton University’s Keller Center, which offers entrepreneurship programs as part of its focus on bridging technology and society, plans to make the Lean Launchpad system an integral part of eLab, its summer accelerator program for budding student entrepreneurs. Cornelia Huellstrunk, the center’s associate director, said Launchpad’s systemic approach should work well to guide students through the initial steps of creating their businesses. ELab, which is currently accepting applicants for this summer’s program, will provide students with stipends, summer housing as well as dedicated mentors for the start-up teams.

James Hornthal, the 2012 James Wei Visiting Professor in Entrepreneurship who taught Launchpad to Princeton undergraduates in a course last semester, said the system is well suited to first-time entrepreneurs. Launchpad was the brainchild of a colleague of Hornthal’s, Steve Blank, a serial entrepreneur who believed scientists’ could transfer their technical expertise to business.

Hornthal, who is an active venture capitalist and has started a number of businesses including the precursor to Travelocity, previously taught the system to graduate students at the University of California at Berkeley. Before he taught the Princeton course, Hornthal had some worries about how undergraduates would handle the material, but he said the students’ intensity made up for a lack of experience.

“Obviously, undergraduates don’t come in with the accounting and financial skills that graduate students might have,” he said. “But I found them to be fearless, relentless. If you told them to talk to 12 customers, they would talk to 15.” (Videos of the presentations Hornthal’s students made are embedded below.)

Zondlo and his team came to the Launchpad system in an entirely different way. The National Science Foundation asked Blank to adopt his system as part of a new program to help researchers bring their scientific breakthroughs to the marketplace. Called I-Corps, the NSF program sends selected research teams to an 8-week business boot camp to learn the basics.

“Basically, you learn to ask the right questions, find customers,” said Zondlo, whose research was supported by Princeton’s Center for Mid-Infrared Technologies for Health and the Environment and the U.S. Agriculture Department. “Do you really know what they want to do?”

The research teams pair up with an experienced business person who acts as a mentor for the fledgling companies. In Zondlo’s case, that is Derek Lidow, another former Wei Visiting Professor at the Keller Center and a current lecturer affiliated with the Keller Center. Lidow, the founder of iSuppli Corp. (now IHS iSuppli) which provides data analysis for the global electronics industry, said Launchpad “is an excellent methodology” for new entrepreneurs.

“It basically takes the best practices from successful entrepreneurs over the past two decades and folds it into a step-by-step method,” he said.

The idea for a greenhouse gas sensor began after Zondlo and Tao’s laboratory model became so popular in the research community that they began receiving requests for copies form their fellow scientists.

“A lot of people came up to me at conferences and asked if we had any plans to sell them,” said Tao, a post-doctoral researcher in civil and environmental engineering.

Zondlo said that he and Tao knew that their sensors could be adapted to meet the demands of a wider market, whether researchers, businesses or regulators. And the initial reception has been positive. Last month, the project received a grant from the Princeton Intellectual Property Accelerator Fund. But he said Launchpad led them to answer critical questions about how their ideas could translate into a successful business. In part, Launchpad does that by requiring the teams to follow an extensive checklist and carefully log information into a database for analysis.

That kind of work allowed Zondlo’s team to make critical adjustments that entrepreneurs call pivots. In one case, customer interviews revealed that most potential buyers wanted a sensor that could take readings over a much smaller area than the team’s original design. It was not a difficult adjustment, but it could have hurt the business critically if the team had not known about it before going to market.

“Launchpad really allows you to focus and learn where your weaknesses are,” Zondlo said. “It is extremely helpful in clarifying what you have to do to be successful.”