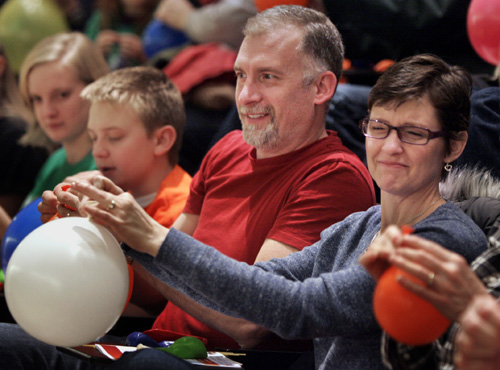 Howard Stone raised a party balloon and turned to face a lecture hall filled with children.

“I want you to blow up the balloon and let the air out and make the worst screeching sound you can possibly make,” he said.

A yowling, screaming, warbling chorus filled the McDonnell Hall auditorium. It was so loud, and so much fun, that Stone had to clap his hands and wave his arms a few times for silence.

“Ok, the danger of this experiment is that it ends the lecture,” he said.

But this was no ordinary lecture. Stone, the Donald R. Dixon ’69 and Elizabeth W. Dixon Professor of Mechanical and Aerospace Engineering, delivered his fifth annual Holiday Lecture to two packed audiences on Dec. 14. A mix of hard science and silly fun, the annual lecture has become a tradition in the Princeton area. The topic of this year’s talk was “Faster than the Blink of an Eye.”

“Our goal is to convince you that the world is really an amazing place,” Stone told the audience. “One of our goals is to try to share some things with you that even the experts haven’t seen or haven’t thought about in a while.” 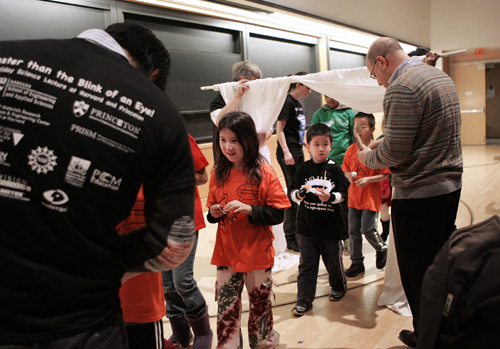 Stone and his assistants used high-speed cameras, high-tech amplifiers and a host of audience participants to unveil the surprising way the world really works when things move faster than the eye can see. Janine Nunes, a research scientist in Mechanical and Aerospace Engineering, used a high-speed camera to record ultra-slow motion video of volunteers shaking their heads from side to side. Stone showed that the “screeching” balloons actually screeched; to the children’s delight, slow motion photography demonstrated that the neck of the balloons warbled like a cartoon character’s throat. In another twist on acoustics, Omelan Stryzak, the physics lab manager, used sound waves to vibrate and shatter a wine glass. He used a torch to – carefully – ignite a hydrogen balloon, which burst with a deep bang. 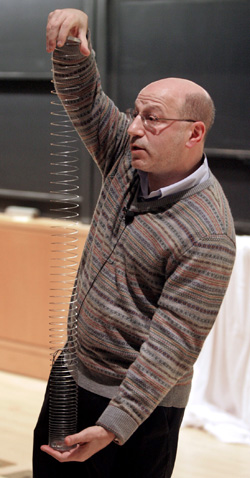 In a less explosive experiment, Stone stretched a Slinky toy vertically and asked the audience guess whether the top, the bottom or the entire Slinky would fall first if he let go.

“I showed this to one of my colleagues at a distinguished university,” Stone told the audience. “He said ‘NO! Do not teach them that! I teach that and I don’t want my students to know the answer when they come to my class.”

To demonstrate the answer – the top falls first – Stone first used a high-speed camera to capture and replay what happened when he dropped the Slinky to the auditorium floor. Then he brought the concept home by having children form two lines and create their own moving Slinky. As each moved forward and touched the shoulder of the child in front, the line moved in a wave, simulating the real Slinky’s drop.

“That is the Princeton version of the falling Slinky,” he said. 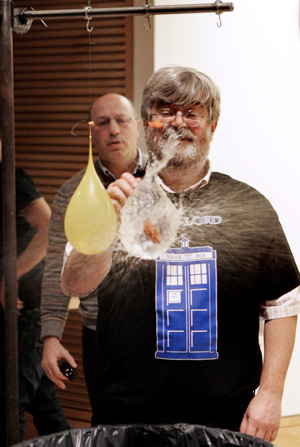 Daniel Steinberg, an educational specialist at the Princeton Institute for the Science and Technology of Materials, popped a series of water balloons, and Stone asked the audience what they saw.

“The water stayed the same shape it was in the balloon,” one girl said.

“You can see that?” said Stone. “OK, we have a couple of people with really good eyes.”

A high-speed camera proved that the audience member was right. For a split second, after the surface of the balloon explodes away, the water stays together as if held by an invisible force.

“The balloon disappears and the water takes a little while before it realizes that nothing is holding it,” Stone said.

Bonnie Bassler, the Squibb Professor of Molecular Biology, concluded the lecture with a demonstration of high-speed behavior in the world of biology. 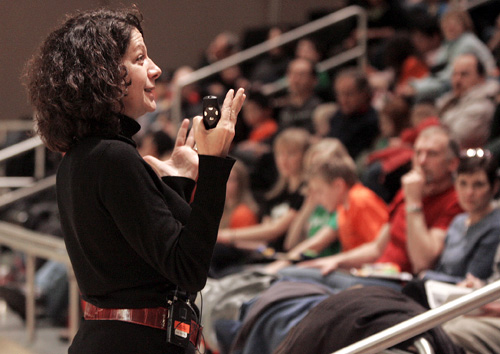 But, she told the children, “a lot of the living world happens much faster than the blink of an eye.”

She showed real-time videos of fish swallowing smaller fish and salamanders making crickets disappear. There was no visible attack, but when Bassler switched to a high-speed video, the trick was revealed. The salamanders’ tongues moved like a bug-snaring whip; the fish used suction to vacuum in its prey.

“The salamander’s tongues moved really fast,” Mattie Arakelian, 9, said after the lecture. She thought the salamanders were interesting, but her favorite part was making the balloon screech.

Stone has said the annual lecture was inspired by the Royal Institution Christmas Lecture in London. Started by Michael Faraday in 1825, the lectures have been delivered annually by prominent scientists since then, with a break during the Second World War. Stone first delivered his lecture while a professor at Harvard University in 2002 and brought it with him when he joined the Princeton faculty in 2009. He still delivers the lectures at Harvard – this year he gave two talks on Dec. 7.

At Princeton, the perennially full talks are popular with the University community but also draw an audience from the wider community. Marie Georgsson brought a group of children from Girl Scout troops in Flemington. She said the talks were particularly valuable for girls who are interested in science and engineering.

“It’s phenomenal, the kids really enjoy it,” she said. “We come every year.”

The annual Holiday Lecture is supported by the office of the Dean for Research, the School of Engineering and Applied Science, the Princeton Center for Complex Materials, a National Science Foundation-funded research program at the Princeton Institute for the Science and Technology of Materials. Additional support comes from the Department of Physics, the Office of Community and Regional Affairs, and Harvard University. 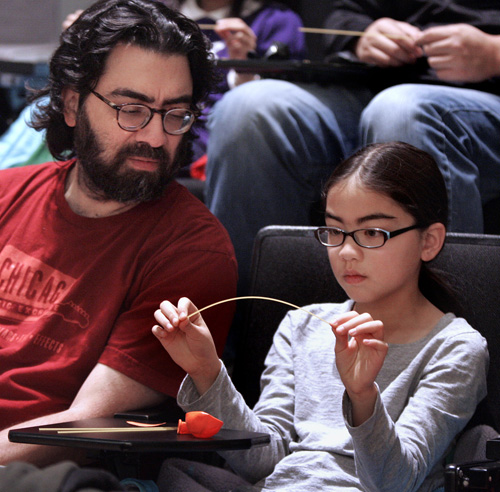 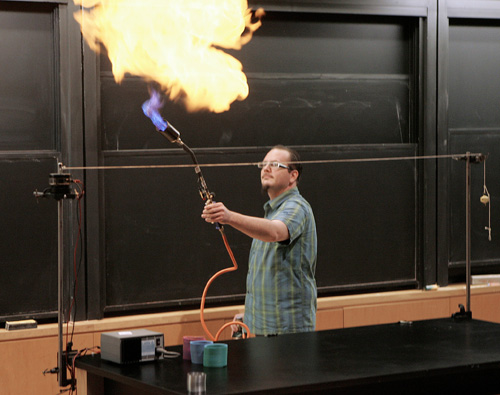