Medical devices that require nothing more than a single breath to instantaneously detect a number of ailments, including diabetes and kidney disease, are just what the doctor ordered.

And, they are exactly what researchers are developing as part of the Center for Mid- Infrared Technologies for Health and the Environment (MIRTHE). 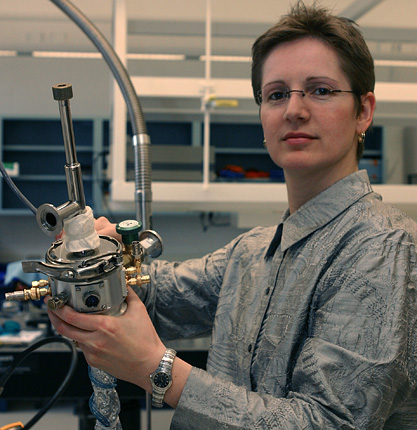 Funded by the National Science Foundation and based at Princeton, the center unites scientists and engineers from six universities with partners in industry and government labs. Their goal is to develop sensors that rely on mid-infrared light-emitting lasers, which are able to detect substances that are invisible to other wavelengths.

The sensors being developed by MIRTHE will be small and compact, making them a feasible option for use in the doctor’s office, Gmachl said. This is in sharp contrast to current breath analysis technologies, which require the collection of breath in a bag that is then sent to a lab for testing by bulky, expensive equipment. As the chemicals in breath continue to react during and after exhalation, today’s assays must attempt to correct for these chemical changes.

MIRTHE researchers at Rice University are currently building a sensor that detects acetone, a substance that can indicate diabetes when present in the breath. The finished device will include a laser made at Princeton, which was subsequently incorporated into a laser system by Maxion Technologies of Hyattsville, Md. Upon completion, the sensor will be tested in a clinical setting at Johns Hopkins University, said Gmachl.

Other sensors in consideration for development would detect other substances, including ammonia, which may allow doctors to identify kidney, liver and lung disease as well as the early stages of oxidative stress.