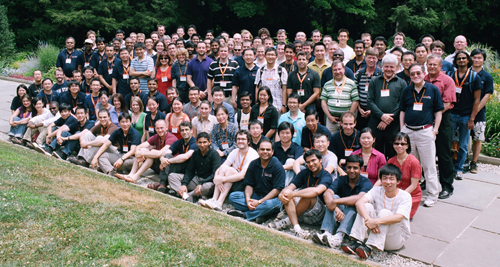 With petroleum supplies dwindling and global warming a growing concern, young scientists flocked to Princeton University this summer for a primer on the science of combustion, a key field of research for developing alternative fuels and the engines that will burn them.

Organized by the Combustion Energy Frontier Research Center (CEFRC), a Department of Energy-funded program based at Princeton, the week-long program filled a gap in science education by connecting early career scientists with seasoned researchers in the field of combustion science.

The event attracted 122 young researchers from the United States and Canada, mostly graduate students and postdoctoral researchers, who attended lectures by leading experts in chemistry and fluid dynamics, fields that form the basis of combustion science.

[Note the full lecture content of the combustion summer school is available free here and through iTunes U.]

“Rarely do schools offer courses that combine these two fairly disparate branches of science,” said Chung Law, the director of the Princeton center and the Robert H. Goddard Professor of mechanical and aerospace engineering. “But if you want to address the immensely challenging problems of energy sustainability and climate change, you need scientists who know both. Currently, over 80 percent of the global energy consumption comes from burning fossil fuels. Even a small improvement in the combustion efficiency will lead to a huge saving in the overall energy expenditure and the simultaneous reduction in the emission of greenhouse gases.”

The intensive program, which ran from June 27 to July 3, featured two three hour courses each day that introduced the fundamentals of combustion theory and chemistry. The courses were taught by Norbert Peters, a professor of RWTH-Aachen, in Germany, Charles K. Westbrook of the Lawrence Livermore National Laboratory and Stephen J. Klippenstein of the Argonne National Laboratory.

Swetaprovo Chaudhuri, a graduate student from the University of Connecticut who attended the program and is now a post-doctoral fellow at Princeton, said it provided an important opportunity not only to dig deep into the fundamental concepts behind combustion science, but also to network with other researchers in the field.

“The courses kept in mind future directions of combustion science, its possible and necessary impact on clean energy, but it also ensured that we developed firm foundations in the theory,” he wrote.

The U.S. Department of Energy established the combustion research center at Princeton in 2009 as one of 46 new centers around the country dedicated to addressing the rapidly growing global demand for energy, shrinking petroleum supplies and the environmental problems associated with petroleum use.

The CEFRC, which received $20 million in funding over 5 years, is the only one that focuses on combustion of fuels to power engines. The center includes 15 of the nation’s leading combustion scientists from seven academic institutions and two national laboratories.

“With the center focused on advancing the science of combustion, we feel we have a huge responsibility to not only conduct the science now, but to prepare the next generation of scientists in this field,” Law said. “That’s why we organized this summer school. The impact will be tremendous 10 to 15 years down the road.”

Because of it success this year, the Princeton center plans to hold the summer school program annually, with an expanded programs to further expand the knowledge of the attendees.