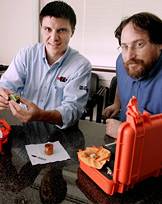 On a late night in February 2011, two Princeton University researchers packed a small object into a box and set it out for the morning mail. The engineers had spent four years developing a new type of microscope lens that focuses in response to sound waves. They were sending their invention to their first customer.

Two years and a lot of hard work later, their invention, the TAG Optics Lens 2.0, has a customer base spanning from Japan to Germany.

The lens has won numerous technology awards, including a 2013 PRISM Award for Photonics Innovation, given by the International Society for Optics and Photonics to the best innovations to come to market in the preceding year in the category of optical components. Earlier this week, R&D Magazine announced that the TAG Lens technology won a 2013 R&D 100 Award, known as an “Oscar of Innovation,” given to the 100 most technologically significant products introduced to the marketplace in the past year. Additionally, the National Science Foundation announced that it was awarding a Small Business Innovation Research grant to TAG Optics to further develop the material processing aspect of the technology. Laser Focus World magazine also recently recognized the technology as one of the four most innovative technologies across the photonics industry in their annual Innovation Awards. 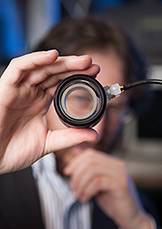 But the road from university laboratory to marketplace was not easy. The story of TAG Optics Inc. illustrates the roller coaster-style journey that new technologies – and their inventors – take as they embark on the path to commercialization. Its journey demonstrates the risks and rewards of entrepreneurship and how such experiences can help professors become better teachers and mentors.

The idea for the TAG Lens began to take shape in 2005 when Craig Arnold, then an assistant professor in mechanical and aerospace engineering at Princeton, offered undergraduate Adam Hopkins of the Class of 2005 an intriguing senior thesis project: to explore how sound can bend and shape a beam of light passing through a fluid. Arnold quickly saw the potential for the project to lead to a new type of microscope.

Hopkins completed his thesis and moved on to other projects as a graduate student at the University – he earned his Ph.D. in 2012 – and Arnold continued the work with subsequent students. By 2007, Arnold and another graduate student, Euan McLeod, working with postdoctoral researcher Alexandre Mermillod-Blondin, had created a lens unlike any the world had ever seen.

The lens consisted of a clear silicone-based liquid trapped in a barrel-shaped housing containing a small speaker capable of blasting sound waves into the liquid. The sound waves created small changes in the density of the liquid molecules, altering the index of refraction of a beam of light traveling through the liquid.

It was an entirely new way of creating a lens. Most lenses, from the one found in the human eye to the ones found in microscopes and telescopes, use moving parts to adjust the focus. “Our lens uses a fundamentally different technology,” Arnold said. “There are no moving parts and thus it can focus at extremely high speeds in response to electronic signals.”

With the help of Princeton’s Office of Technology Licensing, Arnold applied for a patent in 2007 for the invention, but he had little time to think about commercializing the lens while teaching, mentoring students and conducting other research.

The lens remained a laboratory project until early 2010 when Arnold, recently tenured, began talking about commercializing the lens. The idea attracted the interest of a former Princeton student, Christian Theriault, who’d earned his undergraduate degree in 2007 in molecular biologywith certificates in materials science and engineering and engineering biology and completed a Master, Science and Engineering in mechanical and aerospace engineering in 2008.

Theriault was eager to team up with Arnold and take on the challenge of converting a laboratory-grade gadget into an industrial high-precision lens that electronic device manufacturers and medical imaging companies could use. “I knew there was no other product like this on the market,” said Theriault, who, at 25 years old, was “at a point in life where I could take risks.” 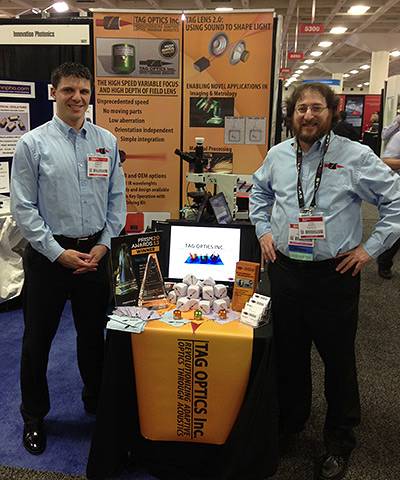 Industry seemed eager for the lens as well, judging from the response to Theriault’s presentation about applications of the technology at an academia-industry partnership meeting in late 2010. “The next thing you know I got a call from someone asking, ‘Where can I buy your lens?'” Arnold said.

A few months later, in January 2011, Arnold and Theriault started TAG Optics Inc. and the truly hard work began. Arnold was on sabbatical that semester, and the two worked around the clock to make a prototype lens.

By February, the two-person company was ready to ship its first unit. “I can still remember packing the first lens that we sent out,” said Theriault. “It was about 3 a.m. The package contained the lens and an instruction manual that was five lines of text.”

Just days later, Arnold and Theriault received an important lesson in product development when the customer called to ask: “How do you turn it on?”

Into the ‘valley of death’

The customer’s question illustrates the divide between invention and product. Invention is creative and dynamic, while product development can seem mundane, according to Arnold. “As a university researcher, my job was to create fundamental knowledge and new technologies,” said Arnold. “I didn’t think about the difficulty that people would have in operating the device.”

The gap between innovation and product development has earned the nickname “the valley of death” because many new inventions fail to successfully transition from the laboratory to the marketplace. Often the problem is finding funding to support the essential steps of product development, such as building a sturdy housing so that the item will not break if dropped.

Early research on the TAG Lens had been funded by government research grants from the Air Force Office of Sponsored Research, but federal guidelines bar the use of these funds for product development. Sales of the first TAG Lenses helped, but the team needed money to try new housing materials, new ways of sealing the device and other improvements. “I said to Craig, we cannot sell a product that takes a Ph.D. to operate,” Theriault said. 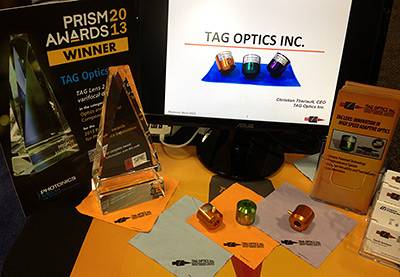 Just as lack of money started to become an issue, the new technology received a much-needed financial boost in spring 2011: It won first place and a $25,000 prize from the Keller Center Innovation Forum, in which University-based teams compete for funds to support their business plans for technologies they’ve developed.

Throughout 2011, Arnold and Theriault worked long hours to improve the lens. Arnold focused on publishable research – such as extending the lens’s capabilities. Theriault worked on what he called “product-ization” – making sure that the lens could survive in the real world where items get dropped and temperatures change – in other words, non-laboratory conditions. They contracted with external vendors to make an aluminum housing and software to control the lens. Another critical influx of money arrived in early 2012. The University’s IP Accelerator Fund, a program designed expressly to support development of early-stage products, awarded $100,000 to the project.

By spring 2012, the company launched the next iteration, the TAG Lens 2.0., which shipped with a “driving kit” consisting of software and electronic components to control the lens. And yes, the device featured an “on” switch.

Throughout 2012, customer orders arrived, primarily from electronics manufacturing companies in Japan, Germany and the United Kingdom. “Our business became 24/7,” said Theriault. Arnold and Theriault talked by phone around midnight every night, discussing the orders and refinements to their technology.

To fill the orders, Theriault hand-assembled each lens, conducted quality control testing, and packed them for shipping. That summer, the team won the Siemens’ Technology to Business Center’s national business and innovation competition.

Today, Theriault holds in his hand an object roughly the size and shape of a spool of thread capped on either end by clear glass windows.

Because there are no moving parts, the lens can focus thousands of times faster than a conventional lens, said Theriault. The lens can focus through its entire range – imagine zooming in all the way and out all the way with a digital camera lens – up to 700,000 times per second, whereas the next fastest competitor lens can change focus only about 150 times per second. “We can quickly increase the depth of field, or focus through an object, to capture a three-dimensional picture in the time it takes to snap a photo,” Theriault said.

That speed has enabled the technology to fill a niche: that of high-precision manufacturing of electronic components for cellphones, handheld computers and other technologies. The TAG Lens focuses laser light that etches circuit designs into silicon or other materials. The electronic controls direct the laser to fire at different focal points in the material with high precision and speed.

Industrial manufacturing has commanded the majority of sales so far, but Arnold and Theriault are working on adapting the lens for use in imaging-related applications where the lens provides technological benefits for cancer diagnosis and quality control assessments. According to Theriault, the TAG Lens could become an integral tool in molecular biology research, where its speed will allow researchers to drastically reduce the time it takes to acquire images and produce 3-D images.

Since that long night in 2011 when Theriault and Arnold packed the first TAG Lens, the work has been hard but extremely rewarding, according to the two researchers. “Our motivation for these hours of long work came from the desire to see a worthwhile technology succeed and translated into a commercial success,” Theriault said. “As engineers, you want to make a difference,” added Arnold.

Arnold said the experience has helped him become a better teacher and mentor. “I can now stand in front of my students and teach them from firsthand knowledge the steps involved in becoming an entrepreneur.”