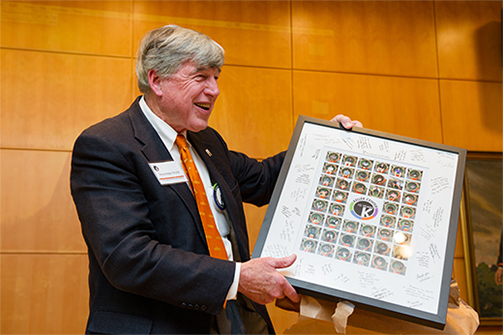 To pursue entrepreneurship is to take risks, to work hard and not be afraid of making mistakes, he said. “You have to operate with a sense of urgency. Once you have an idea, you have to do something about it fast because if you don’t, someone else will.” 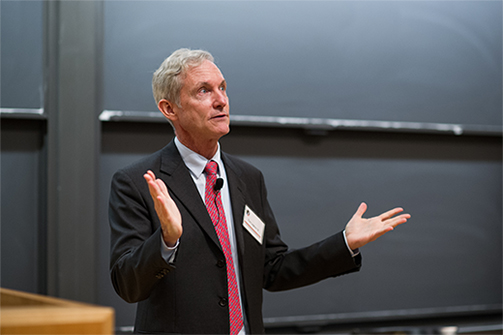 Delivering the event’s keynote, Leighton, who earned a bachelor’s in engineering at Princeton in 1978, described his own journey of entrepreneurship as like “riding a rollercoaster.” He was a mathematician leading the Algorithms Group at the Massachusetts Institute of Technology in the mid-1990s, when he was approached by Tim Berners-Lee, the inventor of the World Wide Web, to come up with a solution to freeing up web congestion.

Through much trial and error, writing grant proposals, entering a business plan contest and negotiating outside business partnerships, Akamai Technologies was born. It is now the world’s largest distributed computing platform, hired by providers of web content to speed the delivery of their websites and video through the Internet. Akamai dynamically routes as much as 30 percent of all Internet content across its network of more than 200,000 servers in over 110 countries.

There was never an intention to create a company, said Leighton. But his research team realized if they wanted to have a broader impact with the technology, they needed to be able to do things their own way. 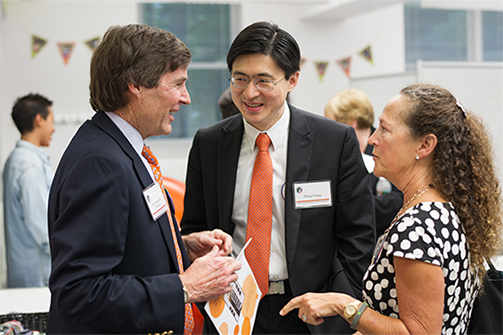 “You can start a successful company, but you are expected to work really hard,” said Leighton. He also emphasized the key to a successful business is not just working with great people to come up with a great product; it is to be “tenacious as hell.”

“My team and I were not going to give up,” he said. “That’s the reason for our success. You have to take risks and realize that it’s fine to fail.”

In addition to Leighton’s talk, the Keller Center symposium included two panel discussions. One panel included conversations on the goals of higher education as well as discussions of the pros and cons of online classes, the importance of preparing students with real life skills, and the challenges of implementing cross-disciplinary curriculums.

The first is critical thinking, because contemporary knowledge work is not just about facts and formulas, but being able to assess a situation, Vertesi said. “It’s about taking the knowledge and processing it. It’s important to think critically about the information and being able to discuss it with other people. This is a skill that is transferable to any environment and it gives students the ability to move comfortably anywhere,” she said.

Making interdisciplinary connections and being surrounded by inspiring minds are other components that are vital to empower students.

The university can give students the environment to be surrounded by inspiring minds in a way that nowhere else can, she said. It is not just a warm and fuzzy feeling to be with people with similar interests, but it’s a key to entrepreneurship.

“It doesn’t take one person to come up with new ideas, it takes a small group of people that can work together effectively,” Vertesi said. “If students can work and think outside the box and listen to each other, it enables them to be able to create something amazing.” 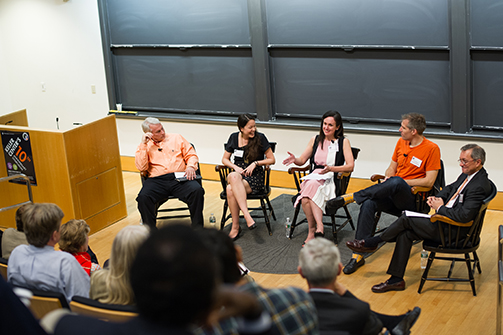 The panel included Chris Brinton, a graduate student in electrical engineering and an entrepreneur working on an educational startup, Zoomi; Kevin Guthrie, a Princeton alumnus and president of Ithaka; and Lisa Herschbach, director of the McGraw Center and associate dean of the college. It was moderated by Derek Lidow, a professor of entrepreneurship at the Keller Center.

Guthrie said the world is changing rapidly in its demand on people and what it takes to be successful, whether at an academic institution, in the work place, or just understanding the world around them. “The role of higher education is to prepare people with the skills to face those challenges, what you can do with your mind and how you can extend yourself,” he said.

However, many people cannot compete in this economy, Guthrie said, noting that higher education is terribly challenged by cost, which creates a “learning gap” between rich and poor. “We need to try to bridge that gap. I’m not saying higher education is not innovative, it’s been evolutionarily innovative. But the pace required to keep up with the ever changing environment is not fast enough,” he said.

“There’s a need to accelerate that change so more people who are outside of the elite can get the experience they need to be prepared for the environment we’re facing now,” Guthrie said.

During the afternoon’s second panel discussion on entrepreneurship, Christine Blauvelt, a 2012 Princeton graduate and co-founder of Duma Works, a recruiting platform that connects businesses and prospective employees in Kenya, said the University fosters a positive and ongoing dialogue on active learning and taking practical action.

There is something special about Princeton that gets students talking about issues and giving them resources for problem solving, said Blauvelt. “I came to school wanting to be involved in global health and I was exposed to the idea of creating a company to tackle those issues. It was revolutionary to me,” she said.

“I was taught humility and learned to express my ideas while taking into consideration what other people have to say,” said Blauvelt. “I also realized you learn more when you are doing your own thing. You learn from experience and that growth is valuable.”

In addition to Blauvelt, the panel included Martin Johnson, founder of Isles, a Trenton, N.J.-based sustainable development organization; Katherine Hays, founder and CEO of Vivoom Inc.; and Brian O’Kelley, CEO and cofounder of advertisement technology company AppNexus. The discussion was moderated by Chris Kuenne, founder of the marketing agency Rosetta.

Leighton closed the event by encouraging students to take advantage of the opportunities the Keller Center and the University are able to provide.

It is invaluable to talk to experienced professionals and ask for advice, said Leighton. “When it comes to trying new things, you have to take risks. You’ll learn quickly and it’s essential to have an open mind.

“You have everything you need to be fabulously successful at Princeton University,” he said. “It is a great place to inspire startups.”