Newly published research by a Princeton engineer suggests that understanding how air travels across the sunroof of a car may one day make jet engines less noisy.

Clarence Rowley, an assistant professor of mechanical and aerospace engineering, did not actually conduct his experiments on a sunroof. Rather, he and collaborators used computer simulations and subsonic wind tunnels at Princeton and at the U.S. Air Force Academy in Colorado Springs, to experiment with models that resembled the open sunroof of a speeding car. 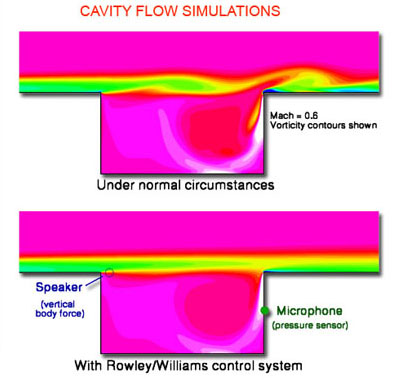 Rowley showed that his simulations could predict how sunroof air flow would behave under various conditions. Just as important, he figured out how to negate the noise that it produced. Rowley’s findings are published in the January issues of the Annual Reviews of Fluid Mechanics and the Journal of Fluid Mechanics.

This research may ultimately lead to modifications of jet engines to make them quieter as they fly over neighborhoods. The research also has important military applications. For example, it would enable stealth aircraft to fly faster because it would reduce buffeting when doors of a weapons bay are open. And Rowley is currently using insights garnered from this work to help develop ultrasmall, unmanned aircraft that would be useful for surveillance or search-and-rescue missions.

Rowley’s task was not an easy one. To precisely model the air current would have required solving more than 2 million equations. Solving these equations by themselves is not too great a challenge for today’s computers, but manipulating them to figure out how to make the air flow quieter would require far more calculation.

“Basically, it would have been computationally impossible,” Rowley said.

So he took an unusual approach. He selectively picked mathematical tools from three different disciplines – dynamical systems, control theory and fluid mechanics – and yoked them together to come up with a computer simulation that, by solving only four equations, could approximate almost identically the answer to the problem that normally would have taken 2 million equations to figure out.

Once he figured out the model, Rowley fought sound with sound.

Rowley focused on the layer of air just above his simulated sunroof, where faster moving air “shears” away from slower moving air. “This shear layer flaps and up and down like a flag in the wind,” Rowley said.

Each time this layer of air flaps down and hits the leading edge of the sunroof, it makes what scientists call an acoustic wave (most people just call this noise).

In his computer model and in wind-tunnel experiments with collaborator David Williams of the Illinois Institute of Technology, Rowley placed a speaker at the front end of his sunroof and a microphone at the rear of the roof. The microphone monitored the flapping and fed this information to a controller. The controller, relying on predictions from Rowley’s model, then sent an opposing signal to the speaker, which is not much different than one found on a typical stereo.

“The physical mechanism is actually very simple,” Rowley said. “When the flag wants to push up we pull it down; when it wants to pull up we push it down. This is what makes it quiet.”

The same principles can be applied to quiet down a jet engine or silence the open bays of a military craft. Rowley does not have immediate plans to promote the technique to the automotive industry to make quieter sunroofs, but he is applying the knowledge to a new project involving tiny unmanned airplanes.

As part of a joint research project led by Caltech, Rowley is doing computational modeling, as well as building a controller, for aircraft that are the size of a typical model airplane. One day, the researchers hope, these aircraft will be able to fly with the speed of a bird and maneuver themselves with the three-dimensional agility of an insect.