When Princeton University engineers want to increase the power output of their new fuel cell, they just give it a little more gas – hydrogen gas, to be exact. Though the simple control mechanism was previously thought impossible, Jay Benziger, a professor of chemical engineering, and Claire Woo, who graduated in 2006, showed it can work. 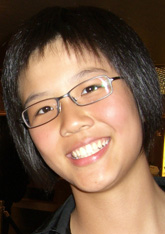 Fuel cells, which use hydrogen to make electricity with only water and heat as byproducts, have attracted much attention as a clean alternative to fossil fuel-burning energy sources. Though the potential for fuel cell-powered vehicles is widely recognized — they are in development by the world’s largest auto manufacturers — much work remains to be done before they become commercially available.

Benziger and Woo’s work is a potentially major development in fuel cell technology. The secret of their success is a system in which the fuel input itself changes the size of the reaction chamber, and therefore the amount of power produced. Previously, electrical resistors were used to dissipate excess power, sacrificing some of the fuel cell’s efficiency. Benziger and Woo’s breakthrough also adds to the understanding of water management in fuel cells – one of the major obstacles to large-scale deployment of the technology in automobiles.

“It’s almost so simple that it shouldn’t work, but it does,” Benziger said, recalling the “lively conversation” that ensued after he and Woo presented their work at the November 2006 meeting of the American Institute of Chemical Engineers in San Francisco.

Woo, who is now pursuing a Ph.D. at the University of California, Berkeley, put it more bluntly.

“The most surprising aspect of the research was, of course, the fact that our control scheme worked,” she said. Benziger had initially asked her to demonstrate that the design wouldn’t work when she joined his lab the summer between her sophomore and junior years, funded by a Research Experiences for Undergraduates grant from the National Science Foundation. “So, we were shocked at our initial results. Then, the following weeks were really exciting as we tried to figure out the mechanism behind the control.”

She and Benziger will publish their findings in the February issue of the journal Chemical Engineering Science.

The first applications of their design are likely to be in small machines such as lawn mowers, the researchers said. The machines would be easy to use, incorporating a design similar to the familiar acceleration systems of cars that use a pedal to increase the flow of fuel and the power output. More important, Benziger said, the use of fuel cells in lawn care equipment would cut down on a major source of greenhouse gases, especially as emissions from these machines are largely unregulated.

For example, an increased flow of hydrogen into the chamber pushes more water out of the system, lowering the water level and increasing the space available for the reaction to take place. Similarly, a decreased flow of hydrogen causes the pressure inside the chamber to drop, drawing some of the water from the tank back into the system and shrinking the reaction chamber.

The water at the bottom of the chamber also serves to maintain the needed humidity for the fuel cell reaction to take place. This patented “auto-humidifying” design demonstrates an innovative use for the water produced during the reaction, which causes problems in most fuel cell designs.

Conventional fuel cells feature a complicated network of serpentine channels to combine the gases, maintain the appropriate humidity levels and eliminate water from the system. Often, droplets of water clog the narrow channels, leading to inefficient and irregular power production. The Princeton system mixes the gases via diffusion in a simple reaction chamber and relies on gravity to drain the water produced.

Benziger and Woo’s reaction chamber also eliminates the need for large and expensive fuel recycling systems that conventional cells require in order to make full use of the hydrogen. Their system is effectively sealed by the water at the bottom of the tank, preventing fuel from leaving and ensuring that the gases remain in the reaction chamber until they combine. Most traditional fuel cells repeatedly run hydrogen and oxygen through an open reaction chamber, converting only about 30 to 40 percent of the fuel at each pass. Since the Princeton system is closed, 100 percent of the fuel can be used in one pass.

The fact that Woo was able to contribute to such groundbreaking work while still an undergraduate is a testimony to her outstanding abilities and to the Princeton community and environment, Benziger said.

“Princeton undergraduates, including Claire, are very talented people,” he said. “Once you get them started on something, they show great insight and can produce magnificent results.” He now has new students, including graduate student Erin Kimball and senior Tamara Whitaker, working on the complexities that arise in fuel cells due to water drop formation and motion.

For her part, Woo said the project confirmed her interest in going on to graduate school in chemical engineering. “It was a great experience,” she said, praising Benziger’s willingness to help her with hardcore research or difficult questions about her future. “He was always willing to listen.”

The work was supported by the National Science Foundation, including a Research Experiences for Undergraduates grant that supported Woo during her summer work.