In a mutually beneficial partnership, Princeton students are helping a local organization reduce its impact on the environment as they strengthen their problem-solving skills and build a stronger connection to the community.

A team of twelve students has worked with the Pennington-based Stony Brook-Millstone Watershed Association throughout the year to help turn the organization’s 30-year-old nature center into a model “green” building. The interdisciplinary group also developed an academic module based on their efforts that will teach elementary students about sustainability. 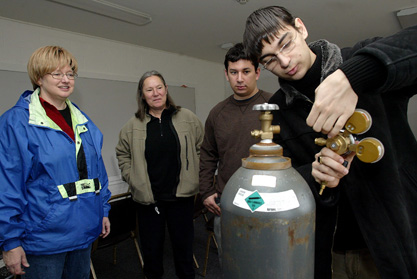 The work is part of the new Engineering Projects in Community Service (EPICS) program, which provides students with academic credit based on work completed on multi-year projects with local not-for-profit organizations. Launched at Princeton this year by Edward Coyle, a Kenan Trust Visiting Professor for Distinguished Teaching, the program is modeled after one he cofounded in 1995 at Purdue University with Leah Jamieson. Coyle and Jamieson, now the dean of engineering at Purdue, both earned their doctorates at Princeton’s School of Engineering and Applied Science, in 1982 and 1977, respectively.

“The partnership with Princeton gives us access to expertise that we wouldn’t have otherwise,” said Bay Weber, the Watershed’s director of property and open space. “And, it helps our mission by promoting environmental education — for the Princeton students, our membership and local elementary-school children.”

After conducting an audit of the nature center’s past and current energy use, the Princeton students spent a Sunday in early March at the nature center building measuring how quickly the heated or cooled interior air escapes or is ventilated to the outside. They were accompanied by the team’s academic advisor Catherine Peters, an associate professor of civil and environmental engineering.

“The trend right now is to seal buildings and reduce ventilation, but you need to consider indoor air quality, too, and find a balance between energy efficiency and ventilation,” said Peters, identifying a key question her students must consider in their recommendations to improve the building’s energy efficiency. “I have seen the students be very inspired by the fact that their work is real — it’s not just a hypothetical problem in a homework assignment. The fact that someone is going to take action based on their findings excites them and gives them a sense of enormous responsibility.”

During the Sunday visit, freshman Dobromir Parushev took baseline readings of the concentration of carbon dioxide inside the nature center and then worked with junior Greg Hiller and senior Eric Hui to artificially raise the level of the gas inside the building by releasing carbon dioxide from a tank. The group then monitored the time required for the concentration to return to the baseline reading. Based on this information, they determined that the air inside the building completely turns over once every two hours.

“I was drawn to the EPICS program because it’s an applied project,” Parushev said.

For senior Brian Elbogen, the team’s leader who is majoring in operations research and financial engineering, the EPICS experience was an excellent capstone to the Princeton experience.

“With my college days winding down, I was especially interested in taking a course that allowed me to apply what I’ve learned in a real-world environment,” he said. “The leadership experience has been especially useful ‚Ä¶ the ability to organize a generalized problem into concrete objectives and implement a strategy to achieve them is something I will be able to use for years to come.” 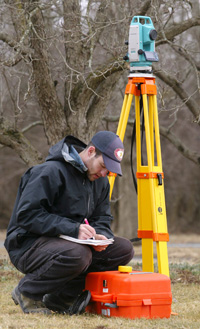 Sponsored jointly by the University’s Center for Innovation in Engineering Education and the Community Based Learning Initiative, EPICS is designed not only to build connections to the community but to leverage the strengths of students from a variety of academic backgrounds. Josh Loehrer, who directs the educational component of the Watershed project, is a junior in the Woodrow Wilson School of Public and International Affairs. Though he admits to having been slightly uncertain about his role on the team early on, given his non-engineering background, Loehrer quickly found himself at ease.

“My specific skills and experience lent themselves to the writing of a proposal for an Environmental Protection Agency grant, which we submitted in December,” he said. This led to his involvement in the creation of a four-lesson module for elementary children on engineering and sustainable energy. Still in development, the curriculum is designed for use by teachers in the classroom or by the Watershed Association in its summer camp program.

Future teams of EPICS students will continue to work with the Watershed to implement environmental modifications at the nature center and deploy the academic module.

The first year of EPICS at Princeton also inaugurated a partnership between a team of Princeton students, the Trenton-based Isles community development organization and Princeton Young Achievers, an after-school program for elementary students from low-income households. Led by Michael Littman, professor and associate chair of mechanical and aerospace engineering, the team is working to repair and restore a tower clock in an abandoned factory being redeveloped by Isles. They also are designing a hands-on curriculum to teach engineering concepts to the Princeton Young Achievers.

“EPICS connects very strongly with what the students want to do with their lives in terms of doing something useful with their engineering abilities,” Littman said. “They’re living the University’s informal motto — ‘Princeton in the nation’s service and in the service of all nations.’ “