The Princeton Autonomous Vehicle Engineering team has advanced to the next stage in the Pentagon’s “urban challenge” competition, the Defense Advanced Research Projects Agency announced May 11.

Having demonstrated in a video that they could engineer a vehicle to drive itself around a short course, the Princeton team was among 53 selected from 89 entrants for a site visit at which Pentagon officials will watch the vehicle in action. 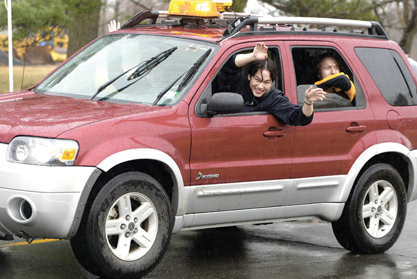 The purpose of DARPA’s “Grand Challenge” competitions is to spur innovation in self-driving vehicle technology. In the 2005 DARPA competition, the Princeton undergraduate team came from behind to become seeded 10 out of the elite group of entrants selected to compete in the final race across the Mojave Desert. Ultimately, a memory leak caused the vehicle to shut down after around 10 miles of autonomous travel.

The current DARPA contest is set in an urban environment and will present a vastly different set of challenges in the design of a self-driving vehicle. The final competition will be held Nov. 3 in a mock urban area that has not yet been announced. The self-driving vehicles have to negotiate a 60-mile course that includes busy intersections and merging traffic. First prize is $2 million.

To be considered for the site visit this summer, teams had to submit a video demonstrating their technical progress. Getting the video together by the April 13 deadline was touch and go, according to junior Brendan Collins.

“The main component under the hood got fried somehow,” Collins said. A replacement component — a data acquisition card that acts somewhat like a traffic cop for the electrical systems of the car — arrived overnight.

With the new switch, the car performed nearly perfectly, according to the team. The video shows the driverless vehicle smoothly navigating the course on Princeton’s Forrestal Campus, effortlessly starting and stopping and changing lanes all by itself. (To view the video, visit http://pave.princeton.edu/main/media.)

The Princeton team’s car is a 2005 Escape hybrid, donated by the Ford Motor Co. 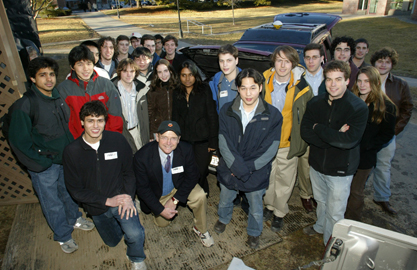 Kornhauser described the DARPA competition as an engineering version of Division I intercollegiate sports. Princeton’s returning “lettermen” — the core group who participated in the last DARPA challenge and have been steering the current effort — are seniors Anand Atreya, Bryan Cattle and Safiyy Momen and juniors Brendan Collins, Gordon Franken, Josh Herbach and Andrew Saxe. Kornhauser said they have been assisted by the energy and expertise of a score of other students including two outstanding freshman recruits, Lindsay Gorman and Derrick Yu.

The Princeton team is unusual among its competitors in the DARPA competition in that it is comprised entirely of undergraduates and receives little assistance from faculty or outside industry.

“We make the design decisions, organize the project and decide who is going to do what,” Collins said.

Atreya said that during the last DARPA competition he was able to do “some pretty cutting-edge stuff.” “Given that at other schools most other teams are made up of graduate students and professional research staff, to be doing this kind of a work as an underclassman was pretty remarkable,” Atreya said.

After the site visits this summer, DARPA will winnow the field to 30 semifinalists. The semifinalists will be announced Aug. 10 and will compete in a national qualification event in October.