At Princeton’s Science and Technology Job Fair Oct. 12, Teddy Wieser found himself answering the very questions he was asking two years ago.

A 2006 Princeton graduate with a B.S.E. in mechanical and aerospace engineering, Wieser now works for Jane Street Capital, a New York City-based trading firm. He was first introduced to the company during his senior year at Princeton when he attended the 2005 job fair. 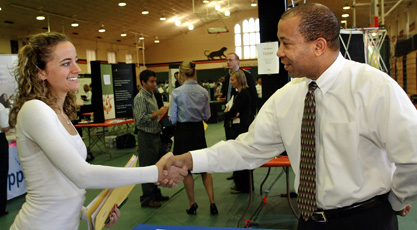 “I had no idea what I wanted to do and the job fair gave me the chance to talk to all different types of employers and ask questions about their companies,” he said. Wieser was particularly impressed with the answers provided by Jane Street Capital recruiters, and he joined the firm shortly after graduating from the University.

Jane Street Capital was one of 77 companies and organizations represented at this year’s job fair, which also included Google, Goldman Sachs, Sandia National Laboratory and the U.S. Navy. As in previous years, the event was sponsored and coordinated by the Office of Undergraduate Affairs in the School of Engineering and Applied Science.

“The job fair represents a wonderful opportunity for students and companies to introduce themselves to each other,” said Peter Bogucki, associate dean for undergraduate affairs in the engineering school. “And, it isn’t just for graduating engineers. Students with a few years left can explore internship opportunities, and those with quantitative skills from non-technical disciplines may also discover interesting employment possibilities.”

Many of the companies and recruiters at the job fair had Princeton connections. Eric Schmidt, a 1976 graduate of the engineering school and trustee of the University, is the chairman and CEO of Google, and Endeca, an information access company based in Cambridge, Mass., was founded by Princeton Engineering alumnus Steve Papa.

“Students are excited about the Princeton connection,” said Liz Arnold, the Endeca campus recruiting manager and a member of Princeton’s class of 1998. The company is similarly energized about the Princeton students, she said. “We’re looking for creative problem-solvers — the kind of people who graduate from Princeton. When people are innovative and can adapt to different situations, their specific academic backgrounds aren’t as important.” 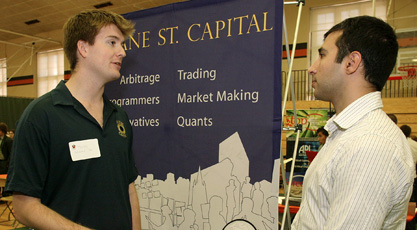 The organization of the job fair, which ran from 10:30 a.m. to 2:30 p.m. and featured 80 recruiting tables arranged throughout Dillon Gymnasium, provided ample time and opportunity for students and employers to engage in conversation and discuss career opportunities in depth.

“Meeting with people is so important,” said senior computer science major Penny Enomoto after speaking with recruiters at Financial Asset Trading and Technology of California, a firm co-led by 1978 Princeton alumnus David Solomon. “The job description, for me, doesn’t tell you enough, and the job fair gives you an opportunity to learn about the culture of a company.”

Recruiters also relished the chance to inform students about a variety of opportunities at their companies. Kevin Phox, human resources director at medical device firm Integra Life Sciences, said he was eager to recruit students for internships in product development, which often lead to full-time positions. In addition to chemical and biomedical engineers, Phox said the Plainsboro, N.J.-based company is always looking for people who have project management experience and interests in the financial aspects of business. Integra’s President, CEO and Director Stuart Essig graduated from Princeton in 1983 with a degree from the Woodrow Wilson School of Public and International Affairs.

Jim Dickinson, who graduated from Princeton in 2006 and is the son of electrical engineering professor Bradley Dickinson, was at the fair to represent New York-based ShopWiki, an Internet start-up. Due to the company’s small size, Dickinson said it presents opportunities for students to become involved immediately in all aspects of starting and running a business. The company is looking for people with particular skill sets, but not necessarily certain majors.

“We’re looking for people who are interested in software engineering and who can design ways to take in raw data and output sophisticated results,” Dickinson said.

Wieser said Jane Street Capital put it more simply. “We’re looking for the smartest people we can find,” he said.