A team of Princeton biologists and engineers has dramatically improved the speed and accuracy of measuring an enigmatic set of proteins that influences almost every aspect of how cells and tissues function. The new method offers a long-sought tool for studying stem cells, cancer and other problems of fundamental importance to biology and medicine.

The research allows scientists an unprecedented look at a special class of proteins called histones, which are at the core of every chromosome and control the way instructions in DNA are carried out. Despite rapid progress in understanding the information encoded in DNA and genes, scientists have achieved much less insight into the so-called “histone code,” which determines why a gene in one cell functions differently than the same gene in another cell.

“We take a cutting-edge approach to a field that has been using more or less the same techniques for the past 15 years,” said http://www.molbio.princeton.edu/index.php?option=content&task=view&a… target=”_self”>Benjamin Garcia, assistant professor of http://www.molbio.princeton.edu/index.php” target=”_self”>molecular biology, who supervised the experimental aspects of the study.

The technique reduces by a factor of 100 the time it takes to analyze histones, while requiring far less sample material and achieving much more nuanced results than existing methods, said http://www.princeton.edu/che/people/faculty/floudas/” target=”_self”>Christodoulos Floudas, the Stephen C. Macaleer ’63 Professor in Engineering and Applied Science, who oversaw computational aspects of the research.

The researchers published their results in the October issue of Molecular & Cellular Proteomics. Their paper was selected as a “must-read” article in Faculty of 1000 Biology, an online journal that selects the most interesting papers in all biology based on peer opinions. A second paper detailing the computational part of the research appeared in Molecular & Cellular Proteomics this month. 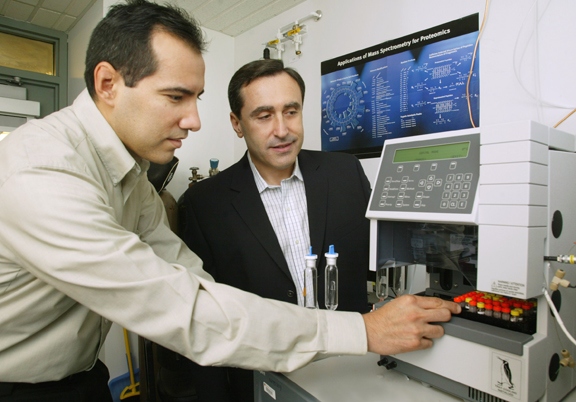 Despite carrying identical DNA, all cells in a body aren’t identical — a cell in the kidney looks and functions very differently from one in the brain. What makes this specialization possible is a set of instructions stored outside of genes or DNA — “epigenetic” information — that helps each cell adapt to its context. Key players in this process are histones, tiny protein spindles that the 6-foot-long DNA molecule wraps itself around in forming a chromosome.

Scientists have long known that histones acquire a variety of small chemical decorations — small molecules attached here and there along the length of the histone. The type and location of these add-ons can regulate nearby genes. Single modifications are known to turn genes on or off, but what happens when multiple modifications occur in combinations — the “histone code” — remains a mystery.

“The ability to understand this phenomenon and control it with great precision would be revolutionary to medicine,” said Young.

Distinguishing between various modified forms of a histone has been challenging because several combinations of different modifications can have nearly the same mass. Indeed, under conventional tests two histones with very different functions could appear identical if they have the same set of modifications but at different locations on the molecule. Before now, efforts to distinguish such subtle differences were extremely difficult and time consuming. “We have now developed the first practical means to do this,” said Young.

The Princeton team combined physical, chemical and mathematical techniques for separating one histone variation from another. First they passed a mix of various histones through a very thin, long tube containing a specially designed material that causes different histone forms to emerge from the tube at different times over a two- to three-hour period. They then bombarded selected molecules with ions to break them apart and send a flood of data into a computer program for high-throughput analysis.

“We may get several thousand sets of such measurements over the course of a single experiment,” said DiMaggio.

When seemingly similar histones are broken into small fragments, differences in the locations of modifications become more apparent. The computer algorithm — based on an area of math called integer linear optimization — repeatedly compares all the fragments until it produces a highly accurate list of modifications and their locations.

“To see separation of nearly identical species and identify and quantify them with high confidence is very exciting,” said Young. He also noted that of the many millions of combinations of modifications possible only a few hundred actually appear in real human cells. This observation implies that combinations of these relatively few modifications form a code that can now be deciphered.

The next step will be to link specific patterns of modifications with observable changes in cells. For example, when normal cells transform themselves into cancerous cells, scientists could track the corresponding changes in the histones. Similarly, scientists could identify particular histone codes that are required for stem cells to change into specific tissue types, such as nerve cells or insulin-producing cells. Understanding and potentially reprogramming these processes could have important implications for regenerative medicine, cancer and other diseases.

As a start, the researchers are collaborating with biologists from the University of California- Los Angeles to identify histone codes relevant for stem cell behavior. “We’ve shown we can measure modified histone forms, but there’s so much to do now,” said Garcia. “This is really the beginning of some true biological breakthroughs.”