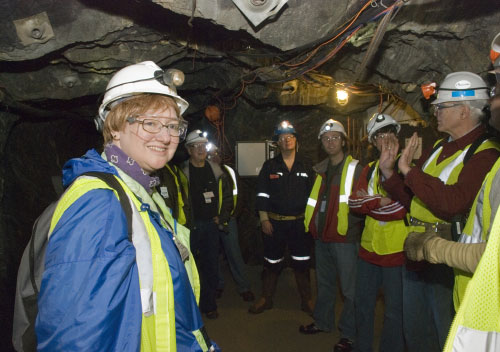 Peters, a Princeton associate professor of civil and environmental engineering, rode an elevator down a deep shaft into the Homestake Mine, a defunct South Dakota gold mine being transformed into an underground science laboratory. She toured the mine to plan for a research project that will explore whether factories that emit carbon dioxide, the gas primarily responsible for global warming, could instead safely pump it into the ground.

“They warned us that people who are claustrophobic may have problems,” Peters recalled later. “The elevator was an open cage and they warned us to keep our hands and fingers inside. It took us about 10 minutes to go down, and we could feel our ears pop.”

Together with collaborators at Lawrence Berkeley National Laboratory, Peters has received $750,000 in initial funding from the National Science Foundation to design an experimental facility in the mine to test what would happen if carbon dioxide stored underground were to leak up toward the surface.

“One of the main uncertainties and what is hindering this strategy for carbon mitigation is what will happen if there is a leak and it migrates upward,” Peters said. “What we are trying to do is reproduce the kind of processes that would happen in an actual sedimentary basin, the kind of geological formation where we might store carbon dioxide.”

Located in the state’s Black Hills region, Homestake was operated as a gold mine from 1876 to 2001 and reaches a depth of 8,000 feet. It was first used for scientific research in the 1960s, when physicist Raymond Davis of Brookhaven National Laboratory led a Nobel Prize-winning experiment to detect neutrinos emitted by the sun.

In recent years, a nonprofit organization, Sanford Underground Laboratory, re-established research facilities in the mine. Sanford’s efforts laid the groundwork for the National Science Foundation and Lawrence Berkeley National Laboratory to convert larger portions of the mine into the Deep Underground Science and Engineering Lab (DUSEL). The facility will be the world’s deepest laboratory, hosting physics, engineering, geoscience and biology experiments that can only be conducted under thousands of feet of rock.

The mine presents a unique opportunity to study the leakage of carbon dioxide through the ground, but not for the reasons one might expect. The regions actually being considered for storing carbon dioxide gas underground are sedimentary basins, such as those in Michigan, Illinois and Alberta, Canada, which boast vast layers of porous sandstone. Homestake’s tunnels cut through a more varied collection of rock and are inappropriate for underground gas storage. But the mine offers plenty of vertical space along with horizontal tunnels, known as “drifts,” that provide access at different depths and are perfect for Peters’ experiments. 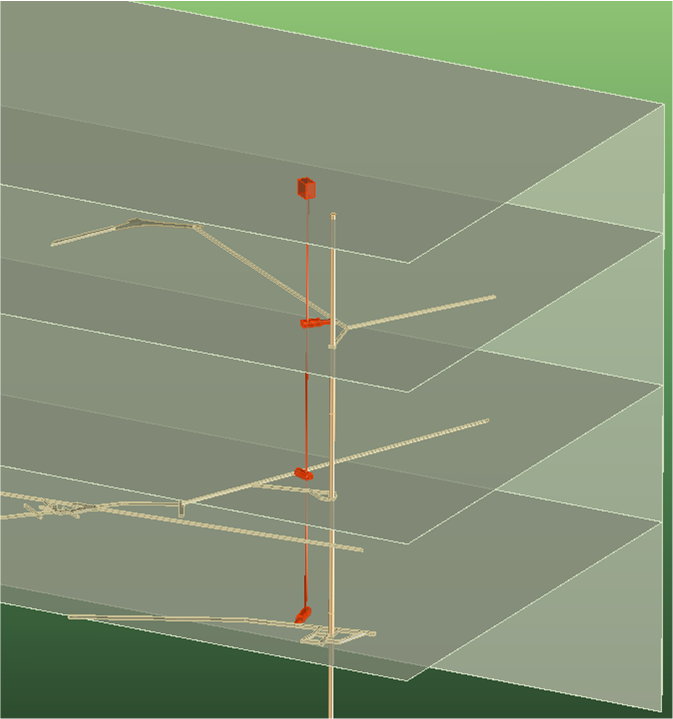 Her team plans to build up to four pipes that are about two feet wide and nearly one-third of a mile high. To simulate a carbon dioxide leak from an underground reservoir into sandstone, they will fill the pipes with sand and water, pump carbon dioxide into the bottom of the pipes and track what happens as the buoyant gas travels upward. The pipes will intersect three or four of the drifts, allowing the researchers access to the pipes at various heights so they can easily measure the progress of the gas with sensors mounted at each level.

“It’s not something that we could study in some smaller system in the laboratory,” Peters said. “The physics don’t scale down.”

Scientists disagree on what will happen in the case of a CO2 leak. Some say the gas will diffuse into the sandy sediments as it rises and “fizzle out” before it reaches the surface. Others predict it will expand and become more buoyant as it moves upward, accelerating the leakage. Whether a leak involves large or small volumes of gas might also play an important role in how quickly the gas rises. “One can simulate with a computer both of these scenarios happening, but without experimental validation of those models we’re left wondering what’s going to happen,” Peters said.

She also hopes to address another matter of debate: how carbon dioxide will interact with layers of harder rock that might serve as caps to the gas reservoirs. When it dissolves in water, carbon dioxide creates an acid that some scientists propose will eat away at the cap rocks and eventually rupture the protective seal. On the other hand, the acid could react with chemicals in the rock to form hard deposits that reinforce the seal.

Peters is working with several colleagues in her department, including George Scherer, Michael Celia and Jean Prevost. Tullis Onstott, of the Department of Geosciences, also plans to use the facility to study how microorganisms found deep underground might provide insight into the origins of life.

The team is working to design for the facility, which will be called DUSEL CO2, within the next few months. Peters expects construction of their portion of the DUSEL facility to begin around 2016 and to see results from their first experiments as early as 2017.

In the meantime, general improvements will be made to prepare the mine to serve as a full-time research facility. “The first thing they’re going to do,” Peters said cheerfully, “is refurbish that elevator.”