Princeton Engineering celebrated the achievements of its 2010 graduates at the engineering school Class Day ceremony Monday, May 31, with awards for scholarship, service and athletics.

The following day, 210 students graduated from Princeton University with degrees of Bachelor of Science in engineering. At the Class Day ceremony, dean of engineering H. Vincent Poor applauded the diversity of pursuits to which students applied their talents. 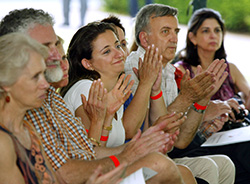 “Our students have played intercollegiate athletics, performed in dance and musical events, served the community and the world, studied abroad, developed novel technologies, made scientific discoveries and composed art and music,” Poor said.

He also noted the broad range of activities graduates plan to pursue, including top graduate schools and companies such as Merck, Microsoft, Google and Boeing. Some are starting their own companies, others heading to medical school, law school, music conservatory, military service, teaching, acting and professional sports.

The winners of major awards at Class Day were:

Muhammad Jehangir AmjadJoseph Clifton Elgin Prize
An electrical engineering major from Rawalpindi, Pakistan, Amjad worked at Princeton to create awareness of Pakistani arts and culture by founding the student group “Pehchaan: Pakistanis and Friends of Pakistan at Princeton” and has served on the International Relations Council as a delegate and conference leader. For his work, he has been recognized with a Spirit of Princeton Award. Amjad also was active with the Muslim Students Association and Oxfam. At Rockefeller College, he was been a resident adviser for two years and a residential computing consultant for three years. He is an avid cricket and squash player. For his independent work, Amjad worked on several projects, including a low-cost method for distributing Internet service in developing countries and an algorithm for turning raw mathematical abstracts into a graph of topics. In addition to his major, he earned certificates in applications of computing and in engineering and management systems.

Next year, Jehangir will be working for Microsoft Corp. as a program manager.

Pawel BuczakGeorge J. Mueller Award
An operations research and financial engineering major with a certificate in the Woodrow Wilson School from Ellicott City, Maryland, Buczak was the center on the men’s basketball team. He started all 27 games his junior year and all 31 his senior year. He had four double-digit scoring games this year and eight last year, while being second on the team in assists both years, an important role for the center in the Princeton offense. Buczak’s thesis on “smart grid” technology, was advised by Professor Alain Kornhauser, who says that he “broke new ground” and “provides clear recommendations as to how the smart grid should evolve.”

Next year, Buczak will be working in finance at Prudential Financial Inc.

John ChangJ. Rich Steers Award
PRISM-Newport Award in Photonics
An electrical engineering major with a certificate in engineering and management systems, Chang is from West Windsor, NJ. In his thesis, he worked on securing data on optical networks and technology for advanced antenna arrays. He was advised by Professor Paul Prucnal, who said Chang’s research “has potentially important applications in homeland security” and will be presented at a conference and published in archival journal. Next fall, Chang will stay at Princeton to begin work on a Ph.D. 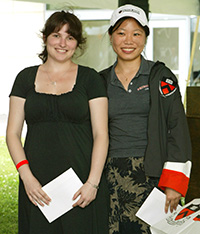 Wai Ling CheungCalvin Dodd Maccracken Senior Thesis/Project Award
Cheung is a chemical engineering major from Brooklyn, New York, and also received a certificate in engineering biology. Cheung’s senior thesis investigated “lasso peptides,” which are small, knotted chains of amino acids produced by bacteria and have an array of potential therapeutic uses from antibiotic activity to treating HIV. Her work was accepted for publication in the Journal of the American Chemical Society, and shortly thereafter, her adviser, Professor Jamie Link, received an e-mail from an expert on lasso peptides that referred to her work as “a breakthrough.”

Next year, Cheung will be working at Exelus Inc. in Livingston, N.J., as a research engineer. 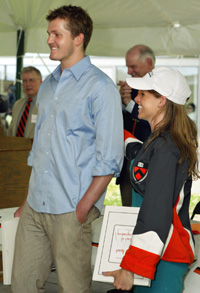 Liz CostelloGeorge J. Mueller Award
Costello, from Strafford, Penn., majored in chemical engineering with a certificate in sustainable energy. Costello was one of the most outstanding women’s track and cross-country runner in Princeton’s history, winning the Ivy League cross country championships by more than 30 seconds in the past three years, placing twice in the top 20 at Nationals, being the only heptagonal athlete to break 17 minutes at Van Cortlandt Park, and named first-team All Ivy and a two-time All-American. For her senior thesis, Costello worked with Professor Catherine Peters to create a computational model of a new experiment in South Dakota for storing carbon dioxide deep underground as a method to reduce greenhouse gas emissions.

Next year, Costello will be working and applying to grad school and plans to run professionally. 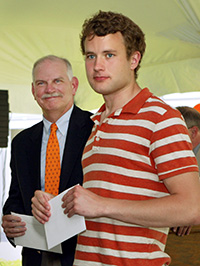 Adam ErnstLore von Jaskowsky Memorial Prize
Ernst, a computer science major from Hortonville, Wisconsin, also received a certificate in Linguistics. His thesis engineered an extension to the WordNet database, which is used by thousands of academic and industrial researchers to integrate natural language processing ability into technology. His adviser, Dr. Christiane Fellbaum, said that Ernst demonstrated intellectual maturity, creativity, and a wide range of technical skills, which made him more of a colleague than a student. Ermst also developed a highly successful iPhone application, itrans.info, which provides directions for transit systems around the world, with over 100,000 customers.

Ernst plans to start his own company in New York City.

Michael GelbartJeffrey O. Kephart ’80 Prize In Engineering Physics
Gelbart came to Princeton from Vancouver, British Columbia, and majored in physics with certificates in applications of computing, biophysics, and engineering physics. His thesis created large-scale simulations of interacting organisms that dynamically evolved to increase their fitness. In the fall, Gelbart will enter the graduate program in biophysics at Harvard University.

Gregor HorstmeyerGeorge J. Mueller Award
Horstmeyer is a civil and environmental engineering major from Palo Alto, California, and earned certificates in environmental studies and sustainable energy. He was a captain of the 2009 water polo team that won Princeton’s second Eastern Championship and finished third in the NCAA nationals, as well as being a second-team All-Southern selection. He is among the top 20 all-time scorers at Princeton despite switching to defense in his senior year and was selected to the American Water Polo Coaches Association All-Academic team. Horstmeyer’s senior thesis project examined the constructional feasibility of a glass shell in work that his adviser, Professor Sigrid Adriaenssens, said was highly creative and is the basis for a journal paper. Horstmeyer plans to travel in China and India for the next few months.

Christina IlventoCalvin Dodd Maccracken Senior Thesis/Project Award
Ilvento, from Santa Barbara, California, was a computer science major with certificates in finance and in Chinese language and culture. Her thesis involved creating a test of a computing methods called “hash functions,” which are critical for most digital information security. Her method defeated at least half the entrants in an advanced round of a national competition to develop new and better hash functions. Her adviser, Professor Ed Felten, said that although he was initially skeptical of Ilvento’s approach, she convinced him that it was worth trying. Later, he told a colleague, “I nearly fell out of my chair when I verified her work.”

Next year, Ilvento will work for Google. 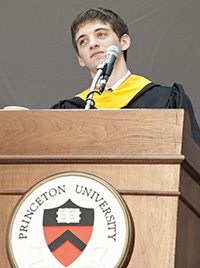 David KarpJames Hayes-Edgar Palmer Prize in Engineering
2010 Valedictorian
Karp, a mechanical and aerospace engineering major with certificates in applied and computational math and applications of computing, is from Berwyn, Pennsylvania. He compiled a remarkable academic record, in which he received grades of A+ in 12 courses, A in 21 others. He took courses in 13 departments and programs. His scholarly accomplishments earned him the honor of being named Valedictorian of his class. He was previously recognized twice with Princeton’s Shapiro Prize for Academic Excellence and with the Class of 1939 Princeton Scholar Award, for the highest academic standing in the Class of 2010 at the end of junior year.

Karp will spend next year studying applied math at Churchill College, Cambridge with a Winston S. Churchill Scholarship. Following that he will begin work on a Ph.D. at Stanford University in computational fluid dynamics holding a Hertz Fellowship.

Cecily KingTau Beta Pi Prize
King, a civil and environmental engineering major from Piscataway, N.J., received the Tau Beta Pi Prize in recognition of her significant contributions to the School of Engineering and Applied Science. She spent summers working in the Engineering Quadrangle coordinating the tour program and also conducting research in her department. One summer she built a model of a chapel designed by Felix Cand√©la for part of a museum exhibition currently on display in Princeton’s Friend Center. King also served in leadership capacities with the student chapter of the National Society of Black Engineers, as vice-president in her sophomore year and president in her junior year, and providing considerable energy to the activities of NSBE.

In the fall, King will start graduate school at Lehigh University. 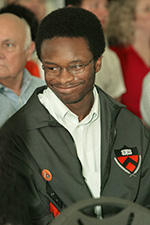 Next year, Kwabe will attend graduate school at the Massachusetts Institute of Technology.

Aditya PandaW. Sanderson Detwiler 1903 Prize
Panda, a computer science major from East Brunswick, N.J. was recognized at the University-wide Class Day ceremony with the Detwilier Prize, which is given to the senior who, in the judgment of the student’s classmates, has done the most for the class. Panda was the class of 2010’s vice president as a freshman and sophomore, and class president as a junior and senior. He also served as treasurer of the undergraduate journal Science in Society and as a member of the Student Volunteers Council (SVC) Executive Board, Terrace Club and the International Food Co-op.

Michael SchoderJ. Rich Steers Award
Schoder, a mechanical and aerospace engineering major from Winnetka, Ill., worked with classmate Jordan Culbreath to create a “cold-water hydrotherapy system” to respond to needs of athletic trainers at Princeton. Their adviser, Professor Michael Littman, said “I am really impressed with their system performance‚Ä¶and the fact that their system has been adopted for future use‚Ä¶.an outstanding project.” After graduation, Schoder will take up a commission in the U.S. Marine Corps.

Justin SirignanoLore von Jaskowsky Memorial Prize
Sirignano, an operations research and financial engineering major from Irvine, Calif., received the certificate in applications of computing. For his thesis, Sirignano studied the “Utility Pricing of Collateralized Debt Obligations,” an important aspect of the complex credit derivatives market. According to his adviser, Professor Ronnie Sircar, this research required learning graduate level mathematics and was innovative in incorporating measures of investors’ risk aversion. Next year, Sirignano will be going to Stanford University for his Ph.D. in management science and engineering.