Using silk strands pulled from cocoons and gold wires thinner than a spider’s web, researchers at Princeton University have created a removable tattoo that adheres to dental enamel and could eventually monitor a patient’s health with unprecedented sensitivity.

In a laboratory in Princeton’s Engineering Quadrangle, a graduate student demonstrated the system’s wireless capability, breathing across a sensor attached to a cow’s tooth. Instantaneously, the sensor generated a response to the student’s breath and transmitted a signal to a nearby monitor.

“This is a real time, wireless response from a sensor that can be directly interfaced with a variety of biomaterials,” said Michael McAlpine, the team’s principal investigator. He said the system not only has the ability to supply fast results, but is able to detect very small amounts of bacteria – a feature that could prove critical in treating certain diseases.

The researchers created the tattoo by bundling the silk and gold with graphene – an extremely thin sheet of carbon in which atoms are arranged in a honeycomb lattice. The material’s unique properties allowed the researchers to construct a small, flexible device able to detect bacteria at a much higher sensitivity level than traditional methods. In tests, the researchers detected samples of bacteria that can cause surgical infections and others that can lead to stomach ulcers.

“In principle, the graphene can be tailored to detect a range of different things,” said McAlpine, an assistant professor of mechanical and aerospace engineering at Princeton “It can be configured to detect DNA or certain viruses. Here, we detect a single bacterium.”

By combining the graphene array with a small antenna, the detection can be picked up by a remote reader device that is small enough to be held in a user’s hand. 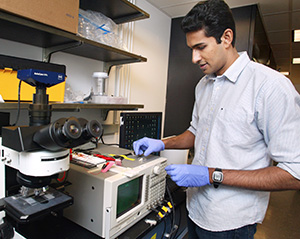 The results were reported March 27 in the journal Nature Communications. In addition to McAlpine, the paper’s authors included Manu Mannoor, Jefferson Clayton, and Naveen Verma of the Princeton School of Engineering and Applied Science; Amartya Sengupta an associate research scholar in the Department of Geosciences at Princeton; Hu Tao, David Kaplan and Fiorenzo Omenetto of Tufts University; and Rajesh Naik, of the Air Force Research Laboratory. Support for the research was provided by the American Asthma Foundation and the Air Force Office of Scientific Research.

To build the devices, McAlpine’s team first imprinted tiny graphene sensors onto an extremely thin film of water-soluble silk. (The Tufts researchers pulled silk strands from cocoons, dissolved them in a solution and dried the mixture to create the silk base.)

Next, they used a stencil-mask assisted evaporation technique to pattern an antenna made of thin gold strands onto the silk film and connected it to the graphene sensors. When completed, the device resembles a common removable tattoo. To attach the sensor, the researchers place it against a tooth, or a person’s skin, and wash it with water. The silk base dissolves in the water, but the graphene sensor and the antenna remain securely fastened to the spot.

McAlpine said one of the goals was to create a device that was small, flexible and passive, capable of providing an in situ detection. So the researchers designed the device without a power supply. Instead, an external radio transmitter held nearby the device delivers a signal that causes the device to resonate and transmit back its information.

“The antenna coil is what transmits the signal,” he said. “You don’t need a battery.”

Designing the antenna was one of the project’s challenges. The gold coil needs to be big enough to transmit a readable signal, but small enough to fit within the sensor’s compact footprint. The team was able to attach the current version of the system to a cow’s tooth; reducing the size of the sensor in order to fit onto a human’s tooth would require further work. 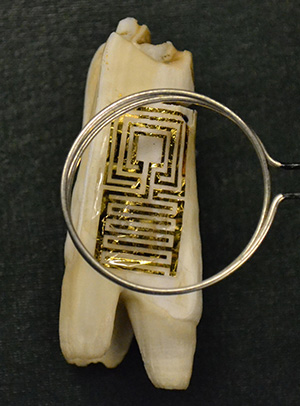 “Typically, the quality with which you can transmit depends on the size of the antenna,” said Verma, an assistant professor electrical engineering. The researchers had to deal with the small size of the antenna by choosing geometry for the coil that resulted in sufficient coupling between an external reading unit and the device – this was achieved through a series of concentric twists.

The current design allows for detection at a relatively short but practical distance, roughly a centimeter. Verma said if longer range was needed for other applications, modifications could be developed for the system.

The researchers said one of the key developments of the research was the use of graphene with a biocompatible base, in this case silk. Current biosensors tend to be relatively rigid and heavy, and they are often uncomfortable for patients. In large part, that is a result of sensors’ base material, called a substrate.

“When you make biosensors the traditional way, silicon is the substrate,” said Mannoor, a graduate student in mechanical and aerospace engineering and the paper’s lead author. “When you think of interfacing that on the body, silicon is very brittle;. Silk allows for a dissolvable platform.”

In addition to its flexibility and biocompatibility, the solubility of silk meant that it could wash away with water or from the body’s enzymes.

The team plans to conduct further studies to better understand the adhesion between the tooth enamel and the graphene sensor with the goal of achieving a longer-lasting bond and enhancing the longevity of the system. One of the challenges for a dental system is protecting the sensor from inadvertent damage from things like brushing.

“Ideally, you want something that would be there for a while,” McAlpine said. “We have a ways to go before we could master that.”