Grey storm clouds scudded overhead, but members of Class of 2012 gathered on the Friend Center courtyard in celebration on Monday, June 4, for a Class Day event that honored graduates’ accomplishments in academics, service and athletics.

H. Vincent Poor, the dean of engineering, said he could remember welcoming the class on engineering students to Princeton just a short time ago.

“There is a Chinese proverb that says the days pass slowly, the years pass quickly,” he said. “I think that is certainly true in this case.”

Poor noted that the 217 recipients of bachelors of science in engineering degrees in the class would be moving on to careers in business, academics or government service, but he said graduation would not mark an end to their connections to the university or the engineering school.

“Your relationship with Princeton is really a lifelong affair,” he said. “We tried our best to infuse you with orange and black blood while you were here, and I hope we have been successful.”

The winners of major awards at the Princeton Engineering 2012 Class Day, as presented by Associate Dean for Undergraduate Affairs Peter Bogucki, as well as awards given to engineering students at the University Class Day event, were:

A chemical and biological engineering major from Bethesda, Maryland, Bartlett studied phenomena arising when model neurons are connected in complex networks. To complete her thesis “Dynamics of Coupled Heterogeneous Neurons in Complex Network Structures,” Bartlett had to master nonlinear dynamics, mathematical modeling in neuroscience and modern network theory. She will work for the Boston Consulting Group. 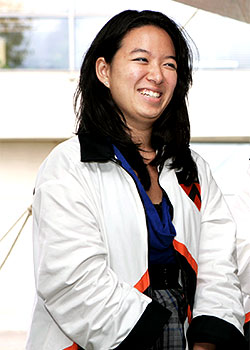 A civil and environmental engineering major from Parsippany, New Jersey, Chen was awarded the Tau Beta Pi Prize for her significant contribution to the School of Engineering and Applied Science. She led the revitalization of the student chapter of the American Society of Civil Engineers by reorganizing its leadership structure and increasing career development and social activities. Chen also organized a school-wide information session about the Fundamentals of Engineering Exam to help students prepare for the exam and to understand the process of professional licensure. She will attend graduate school at Stanford University.

A mechanical and aerospace engineering major from Old Windsor, England, Davison’s senior thesis, “Distributed Coverage Control with Measurements in a Mobile Sensor Network,” was “rigorous and thoughtful,” said his adviser, Professor Naomi Leonard. She said his work “demonstrated original creative thinking and produced excellent results.” Davison, who received certificates in Applied and Computational Mathematics and Robotics and Intelligent Systems, will pursue a Ph.D. in aeronautics and astronautics at the Massachusetts Institute of Technology.

A mechanical and aerospace engineering major from Woodbury, New York, Dixit’s thesis developed an experimental system to look at forces exerted by small groups of cells, and to do so while chemically stimulating the cells. One of his advisers, Professor Howard Stone, said the results will form the centerpiece of a scientific paper that will be written over the summer. Dixit will pursue a Ph.D. in bioastronautics at the Massachusetts Institute of Technology.

The Prism-Newport Award in Photonics

A mechanical and aerospace engineering major from Santa Monica, California, Edwards developed a method to use a high-intensity, short-pulsed laser to write lines into air or nitrogen that fluoresce, allowing them to be photographed with a time-delayed camera. The method, Femtosecond Laser Electronic Excitation Tagging (FLEET), has led to a patent submission and several scientific papers. His adviser, Professor Richard Miles, called his work “Ph.D. level research.” FLEET provides a revolutionary capability for experimental fluid dynamics because the instantaneous structure of turbulent air and nitrogen flows can be seen at a scale of tens of microns. The recipient of a National Science Foundation graduate fellowship, Edwards will pursue a Ph.D. at Carnegie-Mellon University. 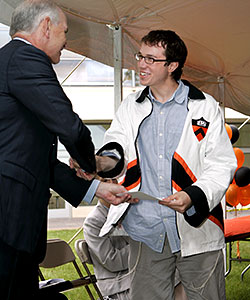 An electrical engineering major from New York City, Herlands developed a system that allows computers to differentiate between string quartets of Haydn and those of Mozart. Using sophisticated analysis such as the integration of multiple melodic and rhythmic elements, he was able to distinguish Mozart from Haydn with 96 percent accuracy, compared with 65 percent or so claimed by human experts. His adviser, Professor Simon Levin, said his work “provides real insight about music‚Ä¶in addition to being outstanding engineering science.” Herlands will begin work at WheelTug Electric Motors.

An operations research and financial engineering major from Bayside, New York, Kim studied information spreading through a network and examined a previously unproven assumption that two different models of information spread are equivalent. Professor Ramon van Handel, his adviser, called his work “one of the most interesting senior theses I have seen,” and said that “Steven managed to prove the equivalence, which turned out to be quite tricky.” Kim will work on a Ph.D. in applied math at Brown University. 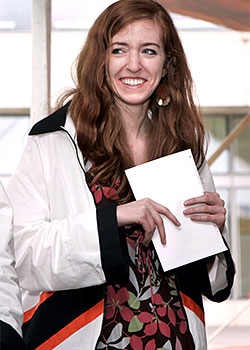 A computer science major, Lancaster was called by her professors “the very best individual lab TA and head lab TA we have had in over a decade.” The recipient of the Tau Beta Pi Prize for her significant contribution to the School of Engineering and Applied Science, she also served on the Computer Science student council. Her independent work extended the Chrome browser to allow for shared browsing between multiple users. Professor Brian Kernighan said that he “would not have thought this possible‚Ä¶it’s really impressive.” Lancaster will soon start work at Facebook.

An electrical engineering major from Tempe, Arizona, Mitra’s work examined doping in organic semiconductors, which is relevant to the development of organic solar cells. Her work will be incorporated into an upcoming scientific paper, and her adviser, Professor Antoine Kahn, said Mitra “is relentless in her drive to understand complex concepts.” She will pursue a Ph.D. in electrical engineering at Stanford.

A computer science major from Lafayette, New Jersey, Podmayersky is a two-time winner of the Shapiro Prize for Academic Excellence and a winner of the Quin Morton ’36 Writing Seminar Essay Prize. He was inducted into Phi Beta Kappa as a junior. Advised by Professors Jennifer Rexford and Michael Freedman, Podmayersky worked on a research team developing a new network architecture called Serval. Rexford said she used his turned-in assignments as the answer key for a graduate course in computer networking and that interacting with Podmayersky “is a wonderful reminder of why I wanted to be a college professor.” He will work at Google.

The PRISM-FEI Award in Materials Characterization

A chemical and biological engineering major from Corona, California, Shaw synthesized and characterized contorted chlorinated hexabenzocoronenes as alternatives to existing electron acceptors for organic electronics. He developed methods for multi-step chemical reactions and purification to synthesize the hexabenzocoronenes, and discovered that the material readily transports electrons. His adviser, Professor Lynn Loo said her lab will build on his findings and investigate the use of hexabenzocoronene derivatives in organic solar cells. Shaw will attend Stanford to work on a Ph.D.

An operations research and financial engineering major from Cherry Hill, New Jersey, Yegya-Raman was awarded the George J. Mueller Award for combining high scholarly achievement with excellence in intercollegiate athletics and the 1916 Cup for having the highest academic standing across the University for any varsity letter winner in the graduating class. The captain of the Men’s Varsity Tennis team, Yegya-Raman had important singles victories this spring that contributed to several victories including those against Yale and Brown. His senior thesis used data from ConEdison combined with market penetration studies and battery recharging behaviors to demonstrate that the electric grid in Queens County, New York, could support an adequate number of electric vehicles. His adviser, Professor Alain Kornhauser, said the analysis “can be replicated in other areas to assess the viability of existing grids to serve the needs of electric vehicles.” Yegya-Raman will go to work at Morgan Stanley. 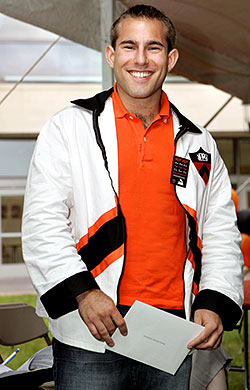 An operations research and financial engineering major from Wayne, New Jersey, Yaroshefsky served two terms as president of the Undergraduate Student Government. He played a major role in launching web applications to benefit classmates including the Integrated Course Engine, used to choose courses, and the electronic meal exchange program. Yaroshefsky was awarded the Elgin Prize in recognition of his work to advance the interests of the engineering school in the community, and the Class of 1901 Medal, which is awarded by the judgment of the senior class to the student who has done the most for Princeton. Dean Claire Fowler in the Office of the Dean of the College said Yaroshefsky has been “incredibly efficient without being officious, interested in exploring ideas and building consensus.” He will work for Insight Venture Partners before attending Harvard Business School in 2014. 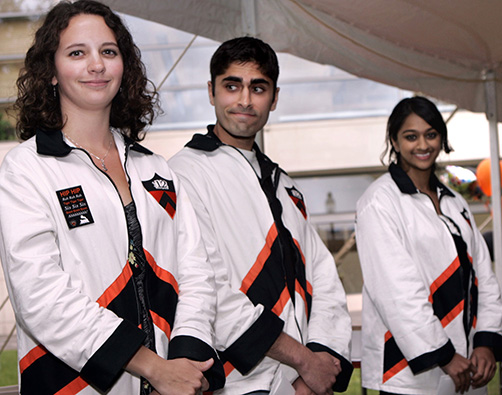