The market for alternative energy technologies shows many areas of promise but also is beset by major uncertainties over regulation and tax policy, a leading energy analyst told an audience of academic researchers and corporate leaders at Princeton University Tuesday, Nov. 13.

Michel Di Capua, head of U.S. analysis at Bloomberg New Energy Finance, was the keynote speaker at Synergize 2012, the first annual meeting of the Princeton University Energy and Environment Corporate Affiliates Program. The mix of great opportunity and high risk, both financial and environmental, that Di Capua described set the tone for the day-and-a-half meeting, which covered topics ranging from greenhouse gas emissions from hydrofracking and the future of nuclear power to the role of land use in climate change. 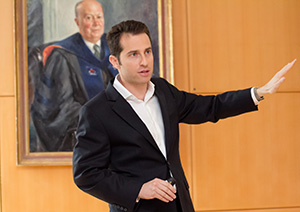 “It’s been a very rocky ride for clean energy companies in the public markets,” Di Capua told the audience of more than 100 people. Cumulative investment since 2004 in the renewable energy market topped $1 trillion last year, with a record high of $280 billion invested in 2011 alone, but will decline in 2012 for the first time since these figures have been tracked. Current markets are hampered by an oversupply of solar panels and other renewable energy equipment, forcing down prices and slowing investment, he said.

“Renewables are getting there, but policy support remains critical,” he said. “By and large analysts would agree that this is an industry that faces a challenging couple of years. Bankruptcies and consolidations are pretty inevitable.

“That’s an important piece, but just one piece of the story,” Di Capua continued. “The much larger part of the story is I have no doubt that this is an industry that is going to grow. If you look at utility executives today, they were trained to run coal plants. Utility executives in 2020 may instead have come from the renewables world.”

In the long-term, renewable energy sources – solar, wind, bio- and synthetic fuels – are moving toward being competitive with conventional sources. “In many parts of the world, renewables are competitive with fossil power, certainly if you add the price of carbon,” Di Capua said.

Di Capua said that carbon markets – a regulated system of buying and selling credits for reducing emissions of the greenhouse gas carbon dioxide – could play a surprisingly strong role in driving change over the next decade.

“People said cap-and-trade was done and the carbon markets were dead and Copenhagen was a disaster,” Di Capua said, referring to the 2009 climate conference in Denmark. “But somewhere in the background in the meantime there has been this coalition of countries and states that really care about carbon markets.” As examples Di Capua cited California’s plans to roll out a carbon trading system and to link it to a similar effort in Quebec; a coalition between Australia and Europe and possible markets in Korea and Latin America.

“I think you could see by the end of the decade some sort of globally linked carbon market, which will be a remarkable story,” Di Capua said.

Di Capua’s talk was followed by a presentation by Princeton Professor Warren Powell on techniques for modeling energy systems and making business decisions in the face of uncertainty. Andrew Bocarsly, a professor of chemistry, presented research on his discovery of catalysts that convert sunlight, water, and carbon dioxide to liquid fuels. Professor Stephen Pacala, director of the Princeton Environmental Institute, discussed the broad picture of global warming and the role of trees and forests as sinks for carbon dioxide. The meeting concluded with a panel discussion of the future of nuclear power led by Professor Robert Socolow.

At a lunchtime session, architect Tod Williams of Tod Williams Billie Tsien Architects discussed his firm’s designs for the 129,000-square-foot building that is currently being constructed to house Princeton’s Andlinger Center for Energy and the Environment. The meeting began the previous day with Professor Denise Mauzerall leading a panel discussion on the environmental impact of hydraulic fracturing, the technique of using pressurized water and chemicals to force oil and gas from small cracks in underground rock layers.

“I am very glad to have been able to provide a venue for dynamic discussions between Princeton researchers and our corporate affiliates,” said Lynn Loo, deputy director of theAndlinger Center. “I am hopeful that this meeting will catalyze new partnerships in research to solve our energy and environmental challenges.” 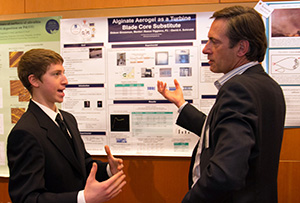 The corporate affiliates program is a University-wide program led by the Andlinger Center in partnership with the Princeton Environmental Institute, the Program in Science, Technology, and Environmental Policy (STEP) at the Woodrow Wilson School, and the School of Architecture. Its mission is to build collaborations with leaders in industry to help translate academic research into practical long-term solutions. An important part of that effort is creating opportunities for students to interact with experts from industry. A key part of the inaugural meeting was a “poster session,” an open forum at which students presented their research.

More than 50 student and post-doctoral presented their work, including:

Graduate student Dan Jiang displayed a poster showing his research on modeling the complex decisions that would go into storing electrical power in massive batteries and then selling it at opportune times. Such an algorithm could help smooth out the demand for energy, allowing power plants to run more efficiently and integrating intermittent sources of power such as solar and wind.

Feedback from industry experts is crucial to the effort, said Jiang, who works in the Department of Operations Research and Financial Engineering with Professor Warren Powell. “They have unique insights that we don’t have on our own.”

Representing the chemistry lab of Professor Andrew Bocarsly, graduate student Elizabeth Zeitler presented work on catalyzing a chemical reaction that would turn carbon dioxide into a liquid fuel. Moving the work from the lab to a practical technology will require significant corporate investment, she said. “The place where the reactor is going to be built will ultimately be in industry.” 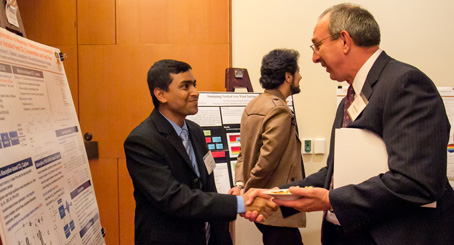 M. M. Faruque Hasan, a postdoctoral researcher in the Department of Chemical and Biological Engineering, said the meeting was particularly valuable for him because he studies a wide range of industrial scenarios that would involve capturing carbon to avoid its release to the atmosphere. Working with Professor Christodoulos Floudas, Hasan is developing a mathematically based decision-making system for companies to decide what technologies would be most effective for a given situation. For example, the production of cement releases a lot of carbon and would benefit from certain capture methods, in contrast to a coal-burning power plant that would best capture carbon in other ways.

“They come with diverse scenarios,” Hasan said of the company representatives at the meeting. “Even in one plant you could have CO2 in different conditions, so this system allows them to optimize for different situations.”

Undergraduate student Sheng Zhou represented research on using iron nanoparticles to drive biological reactions in wetlands that remove heavy metals from contaminated water. The iron nanoparticles feed bacteria that consume the metals and remove them from the water. Working with postdoctoral researcher Aishuang Xiang in the labs of professors Bruce Koel of chemical and biological engineering and Peter Jaffe of civil and environmental engineering, Zhou helped develop a plastic coating for the iron particles that allows control over the particles’ movement through waterways. “The coating doesn’t affect the iron’s reactivity at all so it doesn’t affect how the bacteria use it,” Zhou said.

Loo said she is looking forward to growing the corporate affiliates program by bringing companies from different industrial sectors on board to interact with Princeton researchers and existing partners PSEG, DuPont and Lockheed Martin.