When Keith Rule and a team of interns walked onto the roof of the main building of the Princeton Plasma Physics Laboratory one sweltering day last summer, they could feel in the soles of their feet the temperature difference between a black section of the roof and a white section.

The white roof was tolerable but the black roof was too hot to stand on. “You could feel it coming through your shoes,” recalls Rule, a senior project engineer at the lab, who is collaborating with Elie Bou-Zeid, a professor of civil and environmental engineering at Princeton University to test the effects of the roof colors on energy use.

The researchers installed equipment that will provide a precise picture of what kinds of roofs work best in what kinds of weather, particularly in a place like New Jersey where it’s icy cold in winter and steaming hot in summer.

“The question is: What gives you the most savings for the buck?” said Bou-Zeid. 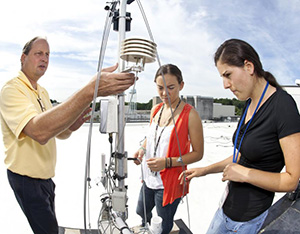 Early data from the project supports what the team’s feet were telling them back in the summer: White roofs are much cooler than black roofs. When air temperatures were in the 90s during the third week of August, for example, sensors measured the temperature on the black roofs at 130 degrees to 170 degrees Fahrenheit – hot enough to fry an egg. Rule’s team needed sunglasses to work on the highly reflective white roofs but they were much cooler – ranging from 90 to 100 degrees.

However, the data also indicates that the thickness of the roof’s insulation, called the R-value, could be the most crucial factor in determining whether the building will absorb the heat. A thicker roof seems to eliminate the differences between the black and white roofs and it works in all seasons, Bou-Zeid said. But more insulation costs more money than painting a roof white and the difference in cost will be another factor the study will consider.

Adam Cohen, deputy director for operations at the Princeton Plasma Physics Lab, said the study has also demonstrated the value of PPPL’s infrastructure for sustainability research: There are a large number of buildings at the site that can be used in a study and the Lab staff has shown itself to be an enthusiastic participant in sustainability research studies. “We showed that we could use this facility as a test bed to evaluate sustainability projects in a real working environment,” Cohen said.

A constant stream of information

PPPL, which already was planning to replace roofs between March and September, agreed to participate in the research by instralling not just black and white colored roofs but also roofs of different thicknesses.

The researchers installed four weather stations that measure key data, such as solar radiation, better known as sunshine, during the sweltering days of the summer to the 85-mile-an-hour winds during Hurricane Sandy in October. The team also installed 25 sensors at five locations inside the roofs to measure heat absorption.

Every 15 minutes a data logger above the ceiling in each of the five buildings sends this information to Bou-Zeid, who is five miles away at Princeton’s School of Engineering and Applied Science. Meanwhile, PPPL’s automatic building systems feed Bou-Zeid data on how much electricity and fuel is being used for heating and air conditioning. He and Prathap Ramurthy, a postdoctoral research associate, plug the data into a computer model that will predict the cheapest and most-energy efficient roof for every temperature and weather condition.

The cool roofs study at PPPL and Princeton stands out from previous studies, Bou-Zeid said, because it is based on extremely detailed, minute-to-minute information on weather and heat absorption, and will therefore result in more accurate predictions.

Another significant difference, he said, is that this study is the only one to compare how the thickness of a roof affects heat absorption compared with cool roofs. “Our data will be much more exact,” Bou-Zeid said.

The main effect cool roofs could have on the environment is to reduce greenhouse gas emissions by cutting the amount of energy used to cool buildings. A 2010 study by the Lawrence Berkeley National Laboratory in Berkeley, Calif., estimated that commercial building owners in 236 U.S. cities who installed cool roofs in warm areas could reduce the amount of energy used for air conditioning by 10 to 30 percent. The study concluded that commercial building owners in cooler areas would pay more for heating in winter but would still realize a net decrease in energy costs.

But the roofs also could cool the planet directly by reflecting more sunlight back into space. Black roofs absorb solar radiation from the sun, which is then re-emitted as heat or “long-wave radiation” that can be trapped by greenhouse gases in the atmosphere. By contrast, white roofs reflect solar radiation, or short waves, which are not trapped by greenhouse gases and therefore do not contribute to global warming, Bou-Zeid said.

Another 2010 Berkeley study predicted that making roofs and pavements more reflective in all cities with populations of more than 1 million people in the northern hemisphere would have an effect on the climate equivalent to avoiding 57 billion tons of carbon dioxide emissions – well more than the global total for one year.

The Cool Roofs project was funded by $193,250 from the DOE’s Energy Efficient Buildings Hub. It is one of several EEB energy projects at PPPL that are concluding in January.