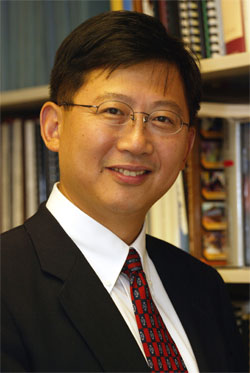 Stephen Chou, the Joseph C. Elgin Professor of Engineering at Princeton, has been elected as a fellow of the National Academy of Inventors.

Chou’s research focuses on nanotechnology – the technologies for, and fabrication of, devices measured in nanometers (billionths of meters). One of his best known inventions is a revolutionary method that uses a nanometer-scale mold to create patterns on computer chips and other nano-scale devices. The technique, called nanoimprint lithography, allows for the efficient, economically-viable use of nanotechnology in devices and in manufacturing. It has furthered the expansion of nanotechnology and its commercialization in a wide range of fields including magnetic data storage, solar energy, biotechnology, medicine, optics and displays.

In addition to nanofabrication, Chou is also a key inventor and pioneer in nanoscale devices. He is one of the first to build single-electron transistors and has invented a new way to store data magnetically called bit-patterned media. He has conducted research and made inventions in sub-wavelength optical elements, which explore the unusual behavior of light in structures that are smaller than the light’s wavelength. Recently, his research team has developed a new kind of solar cell with a “nano-sandwich” of metal and plastic that traps sunlight far more efficiently than conventional methods — nearly tripling the efficiency of organic solar cells. They have also developed new bio/chemical sensors that use novel nano-metallic cavities, which have increased the detection limits of such sensors over one million times, opening up broad applications to bio/chemical sensing, medical diagnosis and personal healthcare.

Chou, the holder of over 60 patents and roughly 70 patent applications, has founded two companies: Nanonex and NanoOpto Corporation, and co-founded BioNanoGenomix. All focus on applications of nanotechnology.

Chou received his doctorate from MIT in 1986, and joined Princeton’s Department of Electrical Engineering in 1998. He is a member of the National Academy of Engineering. In 2004, he received the IEEE Brunetti Award for the development of tools for nanoscale patterning, especially nanoimprint lithography. He is a recipient of fellowships from the Packard Foundation and the Institute of Electrical and Electronics Engineers (IEEE.)

The National Academy of Inventors was founded in 2010 to recognize inventors holding patents with the U.S. Patent Office. It is comprised of research universities and governmental and non-profit research institutions. Fellows are elected in recognition of “outstanding contributions to innovation in areas such as patents and licensing, innovative discovery and technology, significant impact on society, and support and enhancement of innovation.”

Fellows are scheduled to be inducted at the academy’s third annual conference March 7, 2014, in Alexandria, Va.