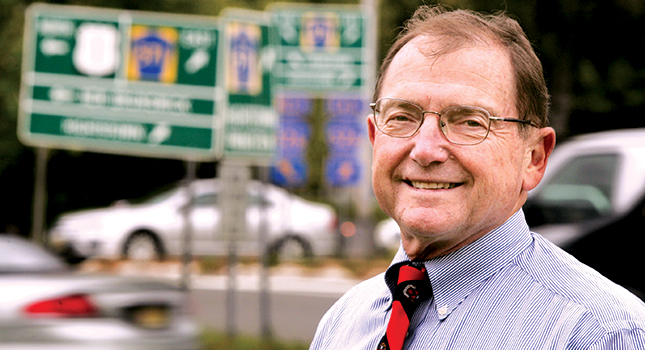 Alain Kornhauser believes technology offers a solution to our dangerous relationship with driving.

Federal records show that 33,780 people died on the nation’s roads in 2012. Many fatalities involved driver error. Kornhauser Ph.D. ’71, an expert in solving transportation problems, says it is time to start taking the driver out of the equation.

“There are a lot of advantages to allowing automated systems to take over some, if not all, of the driving functions,” said Kornhauser, a professor of operations research and financial engineering at Princeton. “It can save energy, reduce pollution, and it could save an enormous number of lives.”

Recently, Kornhauser has been working with New Jersey legislators to make the state more welcoming to automated vehicle technology. Proponents want to change regulations to ease its introduction and support companies that are developing the technology.

“We need to make sure that New Jersey is among the first states to pave the way for this new technology,” said Senator Tom Kean Jr., the Senate minority leader. Kean, who has introduced legislation to overhaul the state motor-vehicle rules, said Kornhauser’s “expertise on this initiative is already proving to be an invaluable resource for state leaders.”

Kornhauser has spent decades helping to automate the automobile. The company he founded, ALK Technologies, provides GPS navigation systems for many of the largest trucking fleets, and its computerized routing systems are an industry standard.

Some might be nervous about letting a robot take the wheel, but Kornhauser points out that many functions have been automated over the years. The MIT Technology Review recently reported that cars with forward-collision warning systems were involved in far fewer accidents than those without the technology. When ALK opened in 1979, few envisioned the extent to which computers would provide guidance to drivers.

“Now, everyone uses them, and no one thinks anything about it,” Kornhauser said.

Kornhauser also is the faculty adviser to the team of students working on PAVE (Princeton Autonomous Vehicle Engineering). The extracurricular team, which has competed in the national challenges sponsored by the Defense Advanced Research Project Agency (DARPA), is working to develop a car that can pass the New Jersey driver’s test.

One problem for auto makers is that state driving laws frequently lag behind the development of new technology. Sensible regulations that, for example, require a driver to be in full control of the vehicle might make it difficult for automation to move forward.

“We are going to require changes in the regulatory framework that controls and oversees the use and operations of the roads if these systems are going to appear and share the road with human drivers,” Kornhauser said. “States are going to do this. And if states are doing it, then New Jersey should be leading the way.”