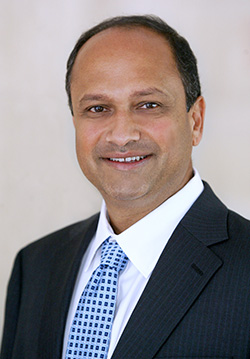 Sanjeev Kulkarni, professor of electrical engineering and director of the Keller Center, has been appointed as the next dean of the Princeton University Graduate School, effective March 31.

His appointment was recommended by Princeton President Christopher L. Eisgruber and approved by the Board of Trustees at their Jan. 25 meeting. He succeeds William Russel, who has served as dean since 2002 and who announced in September that he would step down this year.

“Sanjeev Kulkarni will be a spectacular dean for Princeton’s Graduate School,” said Eisgruber. “Sanj has a well-deserved reputation for excellence as an interdisciplinary scholar, a versatile administrator and a constructive colleague. He cares deeply about the welfare of students, and he will be a thoughtful and effective advocate for graduate education in the years to come. I have no doubt that Sanj is the right person to build upon Bill Russel’s many fine accomplishments as dean of the Graduate School.”

A search committee composed of faculty members and graduate students proposed the selection of Kulkarni, who joined the Princeton faculty in 1991. Kulkarni, who also is an associated faculty member in the Department of Operations Research and Financial Engineering and in the Department of Philosophy, served as associate dean for academic affairs in the School of Engineering and Applied Science from 2003 to 2005; was the master of Butler College, an undergraduate residential college, from 2004 to 2012; and since 2011 has been the director of the Keller Center, which has the broad aim to “educate students to be leaders in a technology-driven society.”

The Graduate School enrolls about 2,600 students pursuing master’s and doctoral degrees in 42 departments and programs. The dean reports to Provost David Lee.

“I am thrilled with the appointment of Sanj Kulkarni as our new dean of the Graduate School,” Lee said. “A winner of many teaching awards during his Princeton career and a seasoned University citizen, Sanj has excelled in every aspect of faculty endeavor. He is known as a community-builder, working collaboratively with different groups within the University community, and so I am excited to have him as a partner in advancing the mission of the Graduate School through our commitment to diversity.

“He has contributed a great deal to Princeton already, and his experience will prove helpful in shaping a vision for graduate student life,” Lee said. “Sanj has a reputation as a generous mentor and a collaborative leader, talents that will serve him well in his new role.”

Kulkarni said he appreciates the chance to serve the University and have an impact in a new role.

“Through more than 20 years as a faculty member and administrator, I have developed a very deep appreciation for Princeton,” Kulkarni said. “It is an honor and a privilege to have the opportunity to serve the University in this capacity. I look forward to working with President Eisgruber, Provost Lee, the trustees, and colleagues and students across campus to advance the mission of the Graduate School.”

Kulkarni said he plans to spend much of the next few months listening to the priorities of the University community, and he identified academics, campus life, diversity and professional development, among others, as some important areas of focus. He will live in Wyman House, the official residence of the dean of the Graduate School, located on the Graduate College grounds.

Kulkarni has had a distinguished career as a researcher and educator at Princeton.

His research spans a broad range of areas related to understanding fundamental limits and developing methods for processing data and information, with a focus on information theory, machine learning, statistical pattern recognition, and signal and image processing. Due to the research’s interdisciplinary nature, he has worked extensively with the philosophy department as well as colleagues in computer science, psychology, and operations research and financial engineering. One of his projects is an interdisciplinary, multi-institution collaboration through the National Science Foundation-funded Center for Science of Information, which seeks to provide quantitative understanding of information representation, processing, and communication in biological, social and engineered systems. Kulkarni is a fellow of the IEEE, the Institute of Electrical and Electronics Engineers.

In addition to advising dozens of undergraduate and graduate students’ research projects, Kulkarni has taught or co-taught a variety of courses in electrical engineering, computer science, philosophy, and operations research and financial engineering. He won the President’s Award for Distinguished Teaching in 2007 and the engineering school’s Distinguished Teacher Award in 2004. Students selected him for the Phi Beta Kappa Award for Excellence in Undergraduate Teaching in 2009, and have given him seven Engineering Council Excellence in Teaching Awards.

Kulkarni has been an active participant in many departmental, school, and university-wide committees and advisory groups. In addition to serving on several program committees within the engineering school, he also has served on the Healthier Princeton Advisory Board, the Frist Campus Center Advisory Board, the Alcohol Coalition Committee, and he is an academic athletic fellow for the football team and a faculty fellow at Butler College. He also is on the Sustainability Steering Council, the faculty advisory committee for Labyrinth Books, and serves as a trustee of Princeton University Press.