Students developed new ways to create fuel, detect unseen structural damage to bridges and analyze the environmental impact of natural gas extraction, Bogucki said at the June 2 presentation. Others developed new techniques to diagnose disease, create non-invasive medical scanners and interact with computers. Bogucki said that one professor told him that “he had never seen an undergraduate make such an impact in research.”

“We have been extremely impressed with the students that are here today,” H. Vincent Poor, the dean of engineering, said in his Class Day address.

Abigail Ward was one student whose work was cited by Bogucki. Ward, the recipient of the Calvin Dodd MacCracken Award, developed a method to control a computer with hand gestures rather than a touch screen. Her advisor, Naveen Verma, said Ward took an experimental sensing technology and developed a system that could be used to control computers in a way that had not been done before.

“This is data that came out of a brand-new technology; no one had even seen this data before,” Verma said. “To make it into a working system, she had to overcome issues related to sensor noise and acquisition, interfacing with computers, physics and algorithms. She put the pieces together.”

Among the 223 students graduating with BSE degrees and 22 with AB degrees in computer science, the winners of major awards at the Princeton Engineering Class Day were: 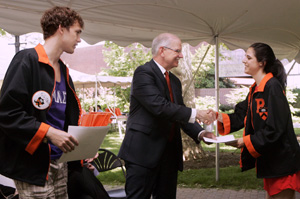 A civil and environmental engineering major from London, Learner was awarded the J. Rich Steers Award which recognizes scholarly achievement that demonstrates potential for further engineering study and practice. Learner used the green-roof installation on the Lewis Thomas Library as a case study to explore the costs and benefits of retrofitting buildings with green roofs. Her advisor, Professor Branko Glisic, said the work demonstrated “extraordinary motivation and a capacity to integrate and apply knowledge.” After graduation, she will pursue a Ph.D. in engineering at the University of Cambridge.

A mechanical and aerospace engineering major from Rockville Centre, New York, O’Neil also won the Steers; he analyzed sustainable economic development projects in sub-Saharan Africa. His advisor, Professor Gregory van der Vink, said the work was “a flagship example” of how job creation could be accomplished in areas with little or no infrastructure. O’Neil will work in product management and design at Zynga.

A mechanical and aerospace engineering major with a certificate in engineering physics, Creely was awarded the Kephart Prize as the outstanding student in the engineering physics program. Creely, of Malvern, Pennsylvania, tested a method of removing hydrogen isotopes from layers of carbon – a critical issue for certain types of plasma research. In addition to demonstrating that the method was feasible, Creely identified key areas in which part of his experimental system could be improved as a diagnostic tool. His advisor, Professor Michael Jaworski of the Princeton Plasma Physics Lab, said the work was a “significant contribution that will continue to have impact on our research program.” In the fall, Creely will pursue at Ph.D. in nuclear science and engineering at the Massachusetts Institute of Technology.

An electrical engineering major from Palm Coast, Florida, Woods was the recipient of the Prism-Newport Award for demonstrating potential for leadership in the field of photonics, electro-optics or optoelectronic materials. Her research explored ways to develop an efficient and economic method to obtain blood glucose measurements that do not require people to prick their fingers for blood samples. Her advisor, Professor Claire Gmachl, said Woods’ work enabled further development of a home-use meter and furthered “engineering in the service of humanity.”

A civil and environmental engineering major from Hong Kong, Tung was awarded the Tau Beta Pi Prize, which recognizes significant contribution in service to the engineering school. Tung was active in a wide variety of programs at Princeton including the Explore Engineering Program for freshmen, open houses for rising sophomores and the Leadership Council. She also was a leader of the Princeton chapter of the American Society of Civil Engineers. Professor Jim Smith, the chair of civil and environmental engineering, said Tung was “a wonderful ambassador to potential Princeton undergraduates, freshmen considering CEE as a major, and to alumni.” Tung will attend Stanford to pursue a master’s degree in civil engineering.

A mechanical and aerospace engineering major from Istanbul, Turkey, Aktas was awarded the Elgin Prize, which recognizes the senior who has done the most to advance the interests of the engineering school in the community at large. Aktas worked for multiple semesters with Engineering Projects in Community Service and travelled to Ghana for a project with Engineers Without Borders. On campus, she organized an annual bazaar to raise funds for global social initiatives. In her senior year, Aktas worked to improve manufacturing designs used at the Raritan Valley Workshop, which employs people with disabilities in small manufacturing activities. After graduation, Aktas, who received a certificate in visual arts, will return to Turkey to work as an artist.

A civil and environmental engineering major from Davis, California, Flanigan received the Mueller Award, which recognizes the combination of academic achievement and performance in intercollegiate athletics. A 4-year member of the women’s tennis team, Flanigan was co-captain of the 2014 team that won the Ivy League championship. For her senior project, Flanigan used optical sensors to analyze stress on an overpass on Route 202 in Wayne, N.J., and created algorithms to determine the bridge’s shape under a dynamic load. Her advisor, Professor Branko Glisic, said her work was so advanced that it affects “the field of structural health monitoring in general.” In the coming months, Flanigan will gain experience in structural health monitoring and apply to graduate school.

A civil and environmental engineering major from Cranbrook, British Columbia, Ross was a four-year member of the men’s hockey team. He was named to the ECAC All-Academic Team for three years and was assistant captain in his junior year before being sidelined by injuries. For his senior project, Ross used data collected through drone flights to analyze methane emissions from hydraulic fracturing operations. Among other things, he found that emissions thought to be constant were, in fact, highly variable and that ground measurements underestimate emissions due to the lofting of plumes by atmospheric turbulence. His advisor, Mark Zondlo, said he had never seen an undergraduate make such an impact on research. After graduation, Ross will join ENVIRON to perform environmental consulting. 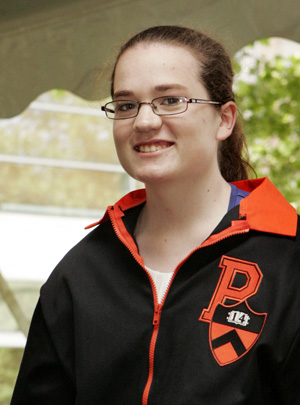 An electrical engineering major from West Simsbury, Connecticut, Ward was the recipient of the MacCracken Award, which recognizes the senior project distinguished for its inventiveness and technical accomplishment. Ward, who also received a certificate in applications of computing, used a variety of scientific techniques to develop a system that allows users to control computers with hand gestures such as hand waving and pointing. Her work was presented during the IEEE International Solid-State Circuits Conference, a top conference in the area. Her advisor, Professor Naveen Verma, said “Abbi is pushing the boundaries of what we know about technologies for interfacing with computers.” After graduation, she will work for Google.

A computer science major from San Diego, California, Kornfeld Simpson was awarded the Lore von Jaskowsky Prize, which is given to students who participate “with noted elan” in research resulting in a contribution to their field and who intend to pursue a career in science or engineering. For her senior project, Kornfeld Simpson studied methods to prevent forensic analyses from recovering encrypted material on a device. Her advisor, Professor Edward Felten, said it was one of the most challenging senior thesis problems he has ever supervised and that her work is clearly publishable. After graduation, she will pursue a Ph.D. in computer science at the University of Washington.

A mechanical and aerospace engineering major from Pleasanton, California, Wang, along with a doctoral student, designed and built a new flow facility in Professor Marcus Hultmark’s lab. The work was a complex engineering challenge, and Hultmark said it is a crucial step in a project the lab is conducting related to reducing drag. Hultmark said that he can “always trust her data,” which he attributed to Wang’s “deep understanding of physics and her strong mathematical skills.” Wang will pursue a Ph.D. at Stanford as the holder of a National Defense Science and Engineering graduate fellowship. 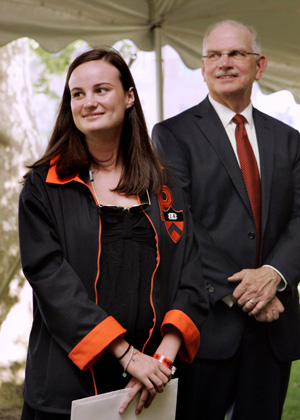 A computer science major from Jacksonville, Florida, Pogrebniak was awarded the Hayes Palmer Prize as the engineering student who has best manifested excellent scholarship, capacity for leadership and the promise of achievement in engineering. Pogrebniak is also a two-time winner of the Shapiro Prize for Academic Excellence, the Princeton Accenture Prize for computer science and the Class of 1939 Scholar Award. She is the valedictorian of the Princeton Class of 2014. In addition to her work at Princeton, Pogrebniak performed research at the National Institutes of Health, where she contributed to several publications and developed a new method to identify lesions in the cortex associated with multiple sclerosis. Her advisor, Dr. Daniel Reich, called her work “a major but hitherto unachieved goal of contemporary MS imaging research.” After graduation, Pogrebniak will study computational biology at Cambridge University as a Churchill Scholar. She will then pursue an M.D. and a Ph.D. at Stanford.