Lasers – devices that deliver beams of highly organized light – are so deeply integrated into modern technology that their basic operations would seem well understood. CD players, medical diagnostics and military surveillance all depend on lasers.

Re-examining longstanding beliefs about the physics of these devices, Princeton engineers have now shown that carefully restricting the delivery of power to certain areas within a laser could boost its output by many orders of magnitude. The finding, published Oct. 26 in the journal Nature Photonics, could allow far more sensitive and energy-efficient lasers, as well as potentially more control over the frequencies and spatial pattern of light emission.

“It’s as though you are using loss to your advantage,” said electrical engineering graduate student Omer Malik, an author of the study along with Li Ge, now an assistant professor at the City University of New York, and Hakan Tureci, assistant professor of electrical engineering at Princeton. The researchers said that restricting the delivery of power causes much of the physical space within a laser to absorb rather than produce light. In exchange, however, the optimally efficient portion of the laser is freed from competition with less efficient portions and shines forth far more brightly than previous estimates had suggested.

The results, based on mathematical calculations and computer simulations, still need to be verified in experiments with actual lasers, but the researchers said it represents a new understanding of the fundamental processes that govern how lasers produce light.

“Distributing gain and loss within the material is a higher level of design – a new tool – that had not been used very systematically until now,” Tureci said. 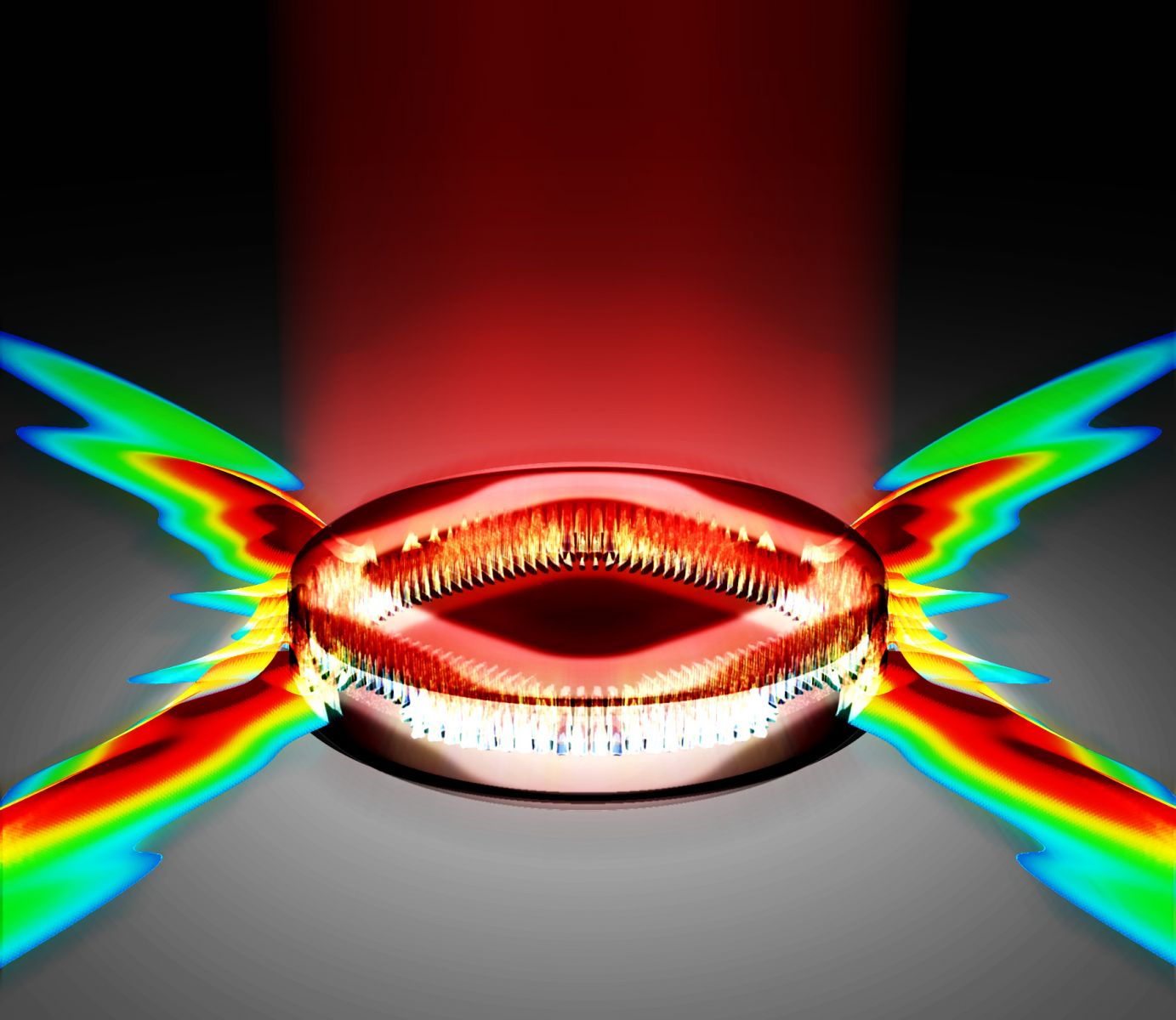 The heart of a laser is a material that emits light when energy is supplied to it. When a low level of energy is added, the light is “incoherent,” essentially meaning that it contains a mix of wavelengths (or colors). As more energy is added, the material suddenly reaches a “lasing” threshold when it emits coherent light of a particular wavelength.

The entire surface of the material does not emit laser light; rather, if the material is arranged as a disc, for example, the light might come from a ring close to the edge. As even more energy is added, more patterns emerge – for example a ring closer to the center might reach the laser threshold. These patterns – called modes – begin to interact and sap energy from each other. Because of this competition, subsequent modes requiring higher energy may never reach their lasing thresholds. However, Tureci’s research group found that some of these higher threshold modes were potentially far more efficient than the earlier ones if they could just be allowed to function without competition.

The researchers showed this selection could be accomplished by directing current only to the physical location where the desired mode originates. In particular, they showed how to calculate exactly how beneficial such targeting would be- and the answer was much more than expected.

Previous studies had looked at applying electric current only to the part of the laser that first reaches threshold, which succeeded in lowering the overall amount of power required to get that the laser to turn on. However, these studies did not consider the full range of modes, nor provide a way to calculate how brightness and efficiency could be controlled by targeting the delivery of current.

Instead of looking at just the first modes, Tureci’s team examined dozens of possible modes and found ones that were optimally efficient. In one simulation, the most effective mode was preceded by 29 other less efficient modes that could turn on first and monopolize the pump energy. The researchers showed that applying electric current only to the pattern associated with this mode would cause it to light up first, free of competition. Targeting these higher order modes produced improvements of efficiency ranging from 100-fold to 10,000-fold, depending on the size, shape and material of the cavity.

“We were surprised when we ran the actual numbers to see how much improvement we could get,” Tureci said.

Hui Cao, a professor of physics at Yale University who was not involved in the research, called the work “inspiring and exciting.”

“The conventional wisdom is to lower the lasing threshold as much as possible, but this approach does not give the maximum output power,” Cao said. “Hakan and his group not only identified the optimal condition to get as much power as possible from the laser but more importantly showed an elegant yet counterintuitive way of realizing it, by utilizing the loss. I believe Hakan’s work will inspire many experimental groups around the world to pursue this new route.”

Previously, scientists designing lasers had two main ways to influence the performance: choosing the basic material that emits the light and designing the physical shape of the device – or cavity – that contains the material. The new paper demonstrates a third approach: careful engineering of gain and loss regions within the laser.

Once a laser has been built with the fine-grained electrical connections that allow this targeting, then its performance can be controlled “on the fly,” Tureci said, “not just during fabrication.”

Overall, the mathematical framework allows researchers to understand the full impact of one mode within the laser sapping energy from another – an effect known as “spatial hole burning.” Disentangling these interactions would allow the selection of just one mode, or perhaps a small number of different modes, that operate most efficiently, the researchers said.

If borne out in actual lasers, the results could lead to laser devices becoming more portable. A gas sensor for environmental field research or a medical diagnostic device that would have required a wall outlet, might be able to function with just batteries, Tureci said.

Tureci said the technology needed to target the delivery of power within a laser is entirely feasible for many common lasers. Just how fine the targeting needs to be depends on the wavelength of light being produced. For typical lasers described in their study, the power would need to be delivered to a space on the scale of micrometers, or thousandths of a millimeter.

Tureci said that graduate student Nyan Aung is conducting tests of the idea in the lab of Claire Gmachl, the Eugene Higgins Professor of Electrical Engineering.

Funding for the research came from the National Science Foundation through the Mid-Infrared Technologies for Health and the Environment center based at Princeton. Additional funding came from the Defense Advanced Research Projects Agency.