After earning a degree in astrophysical sciences, Jared Crooks returned to Princeton to pursue master’s degrees in mechanical and aerospace engineering and public affairs – but that’s not all. This summer, he is adding pages to his busy schedule by starting a business to streamline drug companies’ clinical trials.

“You could say that I am curious about a number of different things,” Crooks said with a laugh. 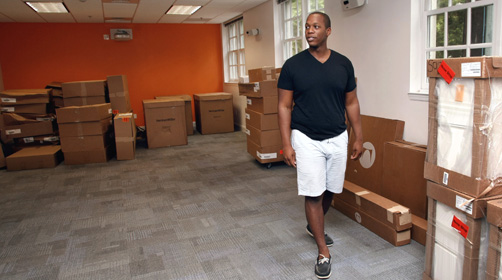 On a recent Monday morning, Crooks joined a small group for an impromptu tour of the Princeton Entrepreneurial Hub, a new incubator space to advance entrepreneurial initiatives and education for faculty, students, and alumni. The hub, located in space leased by the University at 34 Chambers Street in downtown Princeton, will house the Keller Center‘s annual eLab program, which supports student ventures, as well as shared working space for startups founded by faculty, students and alumni.

Crooks will be one of the first users of the Princeton Entrepreneurial Hub as a member of one of the seven eLab teams that will work there over the summer. This summer will be eLab’s fourth season; previously, teams worked in offices in the Engineering Quadrangle. “It looks awesome,” Crooks said after visiting the space. “I can’t wait to start working here.”

The eLab program begins June 8 and ends Aug. 11 and 12 with a pair of Demo Days at which the teams present their work to business leaders.

“When I was here as an undergraduate, eLab did not even exist,” said Crooks, a member of the Class of 2011 who will receive his master’s degrees at Commencement on June 2. Now the program has become an integral part of the University’s effort to assist students and faculty to pursue new ventures.

Mung Chiang, who chaired the Princeton Entrepreneurship Advisory Committee, which recommended the creation of the Entrepreneurial Hub, said the new space will provide “an essential anchor” for a wide range of startup activities at Princeton. The 10,000-square-foot facility will offer meeting rooms, offices, classrooms and information technology support. The space is part of Princeton’s efforts to provide more entrepreneurship education and support to help University students, faculty and alumni advance their creative ideas and make important contributions to society.

“The University has taken an important initiative in creating space for entrepreneurs and entrepreneurship education,” said Chiang, who also directs the Keller Center and is the Arthur LeGrand Doty Professor of Electrical Engineering. “The hub will provide work space for startups and for the exchange of ideas among students, faculty and alumni.”

Jacob Shapiro, whose startup applies “big data” analysis to social systems, said the ability to work with other members of the Princeton community is what makes the new facility so promising.

“Part of what makes it so exciting is the ability to interact with students and help them hone their business ideas,” said Shapiro, an associate professor of politics and international affairs at the Woodrow Wilson School of Public and International Affairs. “In a sense, it is taking the most fun parts of being a professor and creating an opportunity to apply them in a new setting. That’s exciting as a scholar and a teacher and an entrepreneur.”

Chiang said such interactions are only possible with a shared physical space. “We have many colleagues at the University to thank for making the Hub a reality, especially Paul LaMarche from the Provost’s office and Cornelia Huellstrunk from the Keller Center,” he said.

Founded in 2005, the Keller Center supports innovation in education and entrepreneurship programs, with the goal of preparing leaders in a technology-driven society.

The new roster of eLab teams is scheduled to begin working in the hub in the next few weeks. This summer’s program is the first to include a returning team – Friendsy, a college-based social networking service.

“eLab has been tremendously helpful for our growth as a company,” said Michael Pinsky, one of the company’s founders, who is graduating from Princeton this year with a degree in psychology. He said the company started with a single network at Princeton and has since expanded to 230 campuses nationwide. “The ability to work with mentors in the field and use the working space with what became a very large Friendsy team was incredibly valuable, and it is undoubtedly a major reason for our success during the current school year.”

This year’s eLab teams, as described on the Keller Center’s website, include:

Breaking It Down: an online network for collegians from historically disadvantaged groups
ClickStick: a new dispensing technology with accurate dosage control that drastically reduces plastic waste in products from cosmetics to pharmaceuticals
Bodhi Tree Systems: an enterprise software system that facilitates the design and management of pharmaceutical trials
Friendsy: a college-based social networking service that promotes friendships and relationships among members
Klos Guitars: a portable, affordable and durable carbon-fiber guitar
Nuna: a social networking platform making it easy to connect online and offline
TeachMe: a mobile app providing a way to share knowledge one-on-one in a community.

Crooks said he is looking forward to this year’s program. Even though the new business he will be involved in – Bodhi Tree Systems – seems different from his academic interests, he said the common thread is finding solutions to complex problems.

“Princeton teaches you to solve problems,” he said. “That is really the important thing.”