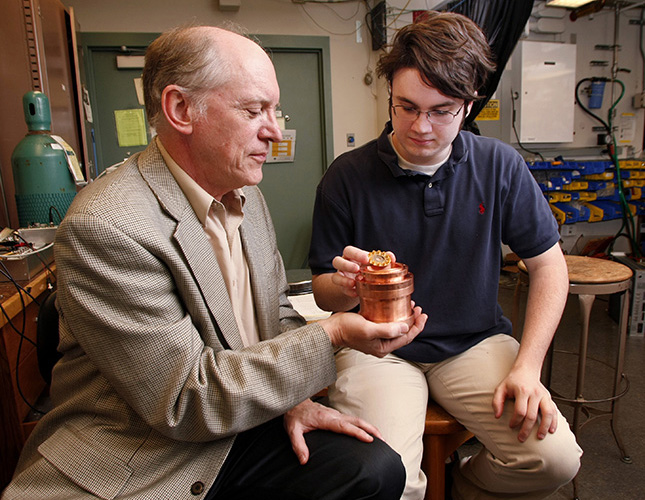 On a pristine field of superfluid helium, Stephen Lyon is coordinating the world’s tiniest rush hour.

The commuters are electrons, rushing and bumping toward an array of microscopic gates “like turnstiles on the subway,” said Lyon, a professor of electrical engineering. His team of researchers is using shifts of voltage like the signal board at New York’s Penn Station, sending streams of electrons zipping back and forth across the helium.

The goal is to do something impossible for a normal station: marshal thousands of electrons through a line of 80 turnstiles in precise choreography at precisely the same time. The timing must be exact, because the smallest lag by just one electron would ruin the procedure.

The purpose behind this feat of control is to build the world’s most accurate standard of electrical current: a device sensitive enough to trickle out electricity by the electron but powerful enough to be used as a practical meter. In short, they hope to complete what scientists call the metrological triangle – an accurate measure of current, resistance and voltage – at the atomic level.

“Right now, we have ways of making extremely accurate resistors; and we have ways to measure voltage, but there is no way to measure current at that level of accuracy,” Lyon said.

It is a shift from Lyon’s normal research area. Typically his team works on quantum computing – the ongoing effort to develop a practical computer that uses the strange laws of quantum physics to solve problems that are currently closed to modern mathematics. But Lyon explained that he arrived at the current experiment after revisiting an old idea.

“Back in the 1970s people were using electrons floating on helium to conduct exciting physics,” he said. Helium’s unique subatomic properties allowed physicists to study quantum phenomena but by 1998 Daniel Tsui, a fellow Princeton Engineering faculty member, won a Nobel Prize for his exploration of the “fractional quantum Hall effect” using semiconductors, and electrons on helium was set aside. 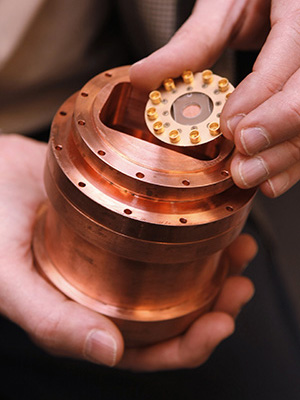 Lyon specializes in an area of quantum computing called coherence. Essentially, he finds ways to place thousands of electrons in the same condition (called a “spin state”) and keep them there for a relatively long period. Normally, Lyon works with incredibly pure silicon, but he wondered whether helium would serve as a better material.

“We started making the things and I was talking to a friend of mine, Neil Zimmerman, who works at NIST (the National Institute for Standards and Materials),” Lyon said. “He said ‘that sounds like something we are trying to do with semiconductors to make a current meter.'”

To pursue the idea, Lyon received support from the University’s Project X Fund, which provides backing for work that is either outside a researcher’s formal expertise or too speculative for traditional funding.

Lyon explained that the frozen helium, cooled to just a few degrees Kelvin, fills the spaces around his 80-turnstile array. The electrons float just above the surface of the helium, moving according to the slightest change in voltage. There are other substances that create this floating effect, Lyon said, but the helium allows the greatest freedom of motion.

“We believe that the helium could be the key,” said Lyon. “At the scale of electrons, the helium is perfectly smooth. It is so smooth that the electrons go exactly where they are supposed to.”

The trick is to coordinate the flow of the electrons and to ensure that only one passes through a gate at a time. At this point, the commuters are still crowding – the team is sending two electrons through.

“We think we can get it down to one if we manage the voltage,” Lyon said. “Of course, we could also be running into an unknown aspect of physics; but that would be pretty interesting as well.”