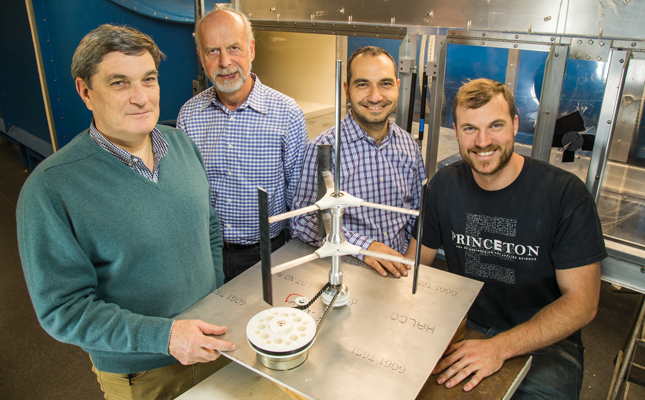 With wind power emerging as a key energy source around the world, Princeton researchers are exploring a new idea to squeeze more energy out of the whirling devices: flip them.

Love them or hate them, the silhouettes of turbine farms are becoming a fixture of the modern landscape – the stalk of a metal tower topped by a giant propeller turning slowly in the wind. These standard turbines, in which the shaft runs horizontal to the ground, have benefited from decades of research into aircraft propellers, resulting in high efficiency.

But research teams led by associate professors Elie Bou-Zeid and Luigi Martinelli Ph.D. ’87, and Alexander Smits, the Eugene Higgins Professor of Mechanical and Aerospace Engineering, are asking whether engineers can create more efficient turbine arrays using vertical turbines. Turning the shaft vertically – like mixer beaters rather than airplane propellers – has some advantages. For one, builders can place the turbine’s generator at the base of the tower instead of mounting it on the top. The vertical turbines are also easier to use underwater and offshore. And unlike horizontal turbines, vertical turbines do not have to change direction to follow the wind direction.

“You can fit more of them in an area,” said Martinelli, an associate professor of mechanical and aerospace engineering. “Also, it might be possible to arrange a set of vertical turbines to increase their overall efficiency.”

That said, vertical turbines come with their own drawbacks. Foremost among those is that current vertical turbines are only about 80 percent as efficient as horizontal ones. The blades create complex swirls on the downwind side of the turbine, which creates a pocket of dead air behind the blades, slowing the rotation and decreasing power production.

“The process is called dynamic stall,” Martinelli said. On a computer simulator in his office, the critical area looks like a tiny hurricane’s eye behind the turbine blade.

To approach this problem, the researchers have developed a model that simulates air flow through vertical turbines and are designing blades that decrease dynamic stall as they move through the air. As they re ne their model, the researchers also are exploring whether it would be possible to use the flow created by the turbines to increase the overall efficiency of an array of turbines (rather than increasing the efficiency of each one).

To address this issue, they teamed up with Bou-Zeid, whose research group studies wind patterns in the lower atmosphere. Bou-Zeid studies microclimates such as cities but in this case, he applied his expertise to wind farms.

“Typically, turbines are arranged to make sure that one turbine is not in the wake of another,” said Bou-Zeid, an associate professor of civil and environmental engineering.

However, unlike standard turbines, vertical turbines can be arranged so the wake from one turbine boosts others nearby. The researchers are working with clusters of three turbines and believe they can use the arrangement to markedly increase their efficiency.

“The beauty of it is not only that you can pack more turbines into an area, but that the efficiency of each turbine is not less, it is actually greater than a single turbine,” Bou-Zeid said.