The sun’s warmth crosses millions of miles of empty space to create a summer day; a campfire roasts marshmallows from several feet away. Scientists have understood the mathematics behind this ghostly transfer of heat since the late 19th century. But that math breaks down at very close quarters – within, for example, nano-scale electronics and solar electricity cells (with components separated or spanning billionths of a meter) where heat transfer is critical.

In a recent study, a researcher at Princeton and colleagues at the Massachusetts Institute of Technology have come up with a formula that describes the maximum heat transfer in such tight scenarios. Surprisingly – and encouragingly – the formula suggests that a million times more heat transfer is possible between close objects than previously thought. 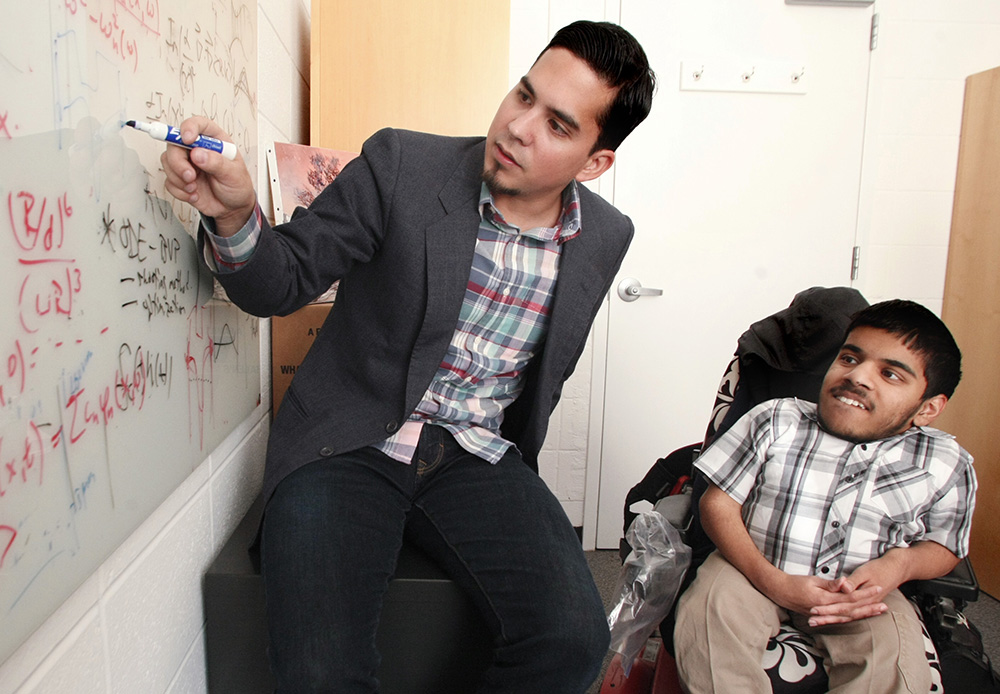 “We now have a ceiling for how much heat transfer we can expect,” said Alejandro Rodriguez, an assistant professor of electrical engineering at Princeton. “The fact that this ceiling is several orders of magnitude higher than has been previously demonstrated in existing material structures is extremely promising and will motivate further studies of this phenomenon and its many applications.”

The formula is the first major amendment to the math that describes radiative heating – the Stefan-Boltzmann law – since it was established in 1879. With this new formula, engineers will know how much more performance can be squeezed out of their structural and material designs. Potential uses could include trapping heat and converting it directly into electricity (in devices called thermophotovoltaics), as well as cooling off electronics components such as processors.

Rodriguez and his collaborators Owen Miller and Steven Johnson, both of MIT, described the work in a paper published in November in Physical Review Letters. (The work is further discussed in the journal Physics.) The work was funded by the National Science Foundation and the Air Force Office of Scientific Research.

“The paper presents very novel results that highlight the possibility of dramatically enhancing radiative heat transfer between bodies,” said Pramod Reddy, an associate professor of mechanical engineering and materials science and engineering at the University of Michigan who was not involved in the study. “These computational results are especially interesting and useful as they come at a time when long-desired experimental tools that are critical for testing these important predictions are becoming available.”

Rodriguez’s group at Princeton focuses on manipulating the interactions of light and matter at nanoscales, so tackling the problem of capping near-field heat transfer was a natural fit. Scientists have known for decades that very close objects can transfer much more heat than the Stefan-Boltzmann law would suggest is possible, but no one had a mathematical description of the maximum energy transfer that is possible in such situations.

“I kept wondering why we have limits for ‘far-field’ emission, the more familiar, everyday situation when objects are fairly far apart, yet we do not have anything remotely similar for the near field,” said Rodriguez.

Part of the reason, Rodriguez explained, is that the physics of heat transfer dramatically change when objects get up close and personal. In far-field heat transfer, a hotter object warms a cooler object by transferring energy via electromagnetic radiation, better known as light. At room temperatures, light with an invisible, infrared wavelength of about eight microns – dubbed the wavelength of heat or thermal wavelength – participates most in the heat transfer.

According to the Stefan-Boltzmann law, the upper limit on this overall heat exchange simply hinges on any two bodies’ temperatures. The benchmark for comparison is a theoretical “blackbody,” which perfectly absorbs all radiation that alights upon it.

When objects nearly touch – that is, their distance is less than the primary wavelength of heat – this blackbody maximum can be vastly exceeded. At such distances, a different type of electromagnetic wave steps to the fore. Called evanescent waves, they disappear exponentially with distance, and so play essentially no role in heat transfer beyond the nanoscale.

To fully account for evanescent waves’ effects, Rodriguez and colleagues incorporated several key concepts: the flow of electrical current within objects, the conservation of energy, and “reciprocity,” the ability of either object to act as a heat receiver or absorber.

All told, the answers churned out by the resulting formula depend only on the material properties of two objects and the degree of their separation. Conveniently, therefore, the new formula applies to objects with any arbitrary shape. By tweaking the material composition and shapes of objects, researchers can thus work out how to maximize near field heat transfer.

“What we’ve done is found a generalization of the Stefan-Boltzmann law to situations where objects are right on top of each other,” said Rodriguez. “Now we want to figure out what structures and materials can approach the limits described by our new equation.”

He and his colleagues compared the predictions of their formula against the heat exchanged by two barely separated metal plates, a structure that has been used in recent years to investigate the frontiers of near-field heat exchange. Because of their planar shape, plates turned out to fall well short of the theoretical limits that Rodriguez and colleagues established. Essentially, they found that a large part of the evanescent waves emitted by a hot plate ends up reflected, rather than transmitted, back into it.

Structures being explored by Rodriguez’s group, such as two objects studded with disks of varying and nearly interlocking sizes, come much closer to capturing the full benefits offered by the near field. The Princeton scientists are using computers to rapidly create and vet potential surface designs, which can now be truly optimized courtesy of the new heat exchange equation.

In a useful bit of synergy, the same sorts of techniques for optimizing heat exchange have also led Rodriguez and experimental collaborators to discover structures for transferring optical energy from one frequency to another. Just as with near-field heat transfer, such frequency-conversion transfers also have considerable efficiencies yet to be realized.

“I am very optimistic that we will be able to come very close to reaching the limits both for near-field heat transfer and frequency conversion,” said Rodriguez. “That’s the spirit of much of the work I’m doing here at Princeton.”