Researchers from Princeton University are joining with colleagues from U.S. government laboratories in an effort to dramatically improve the test for the Ebola virus. The goal is to offer a quick, accurate and inexpensive method to help contain future epidemics.

“We have had some very exciting initial results with this fast, low-cost platform for detecting infection with the Ebola virus,” said Stephen Chou, the Joseph C. Elgin Professor of Engineering in the Department of Electrical Engineering at Princeton. “We believe it is now worthwhile to start up a much larger program to explore this emerging technology.” 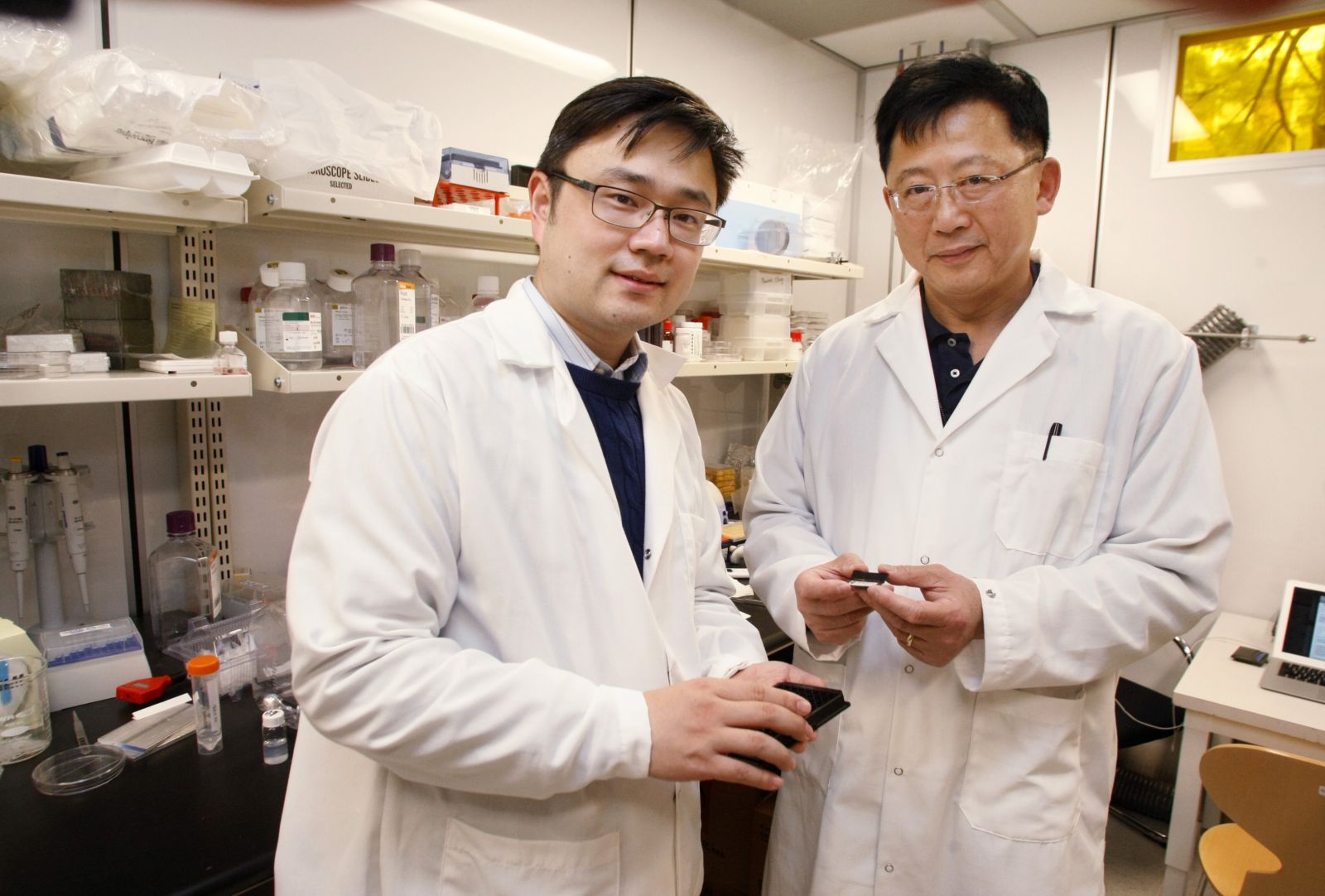 The test relies on technology developed at Princeton that uses nanoscale structures to significantly increase the detection of the Ebola virus in a sample of body fluid. Called the M-Plate, the technology works in part by amplifying the light emitted in testing for the virus. The researchers believe the M-Plate technology could provide hundreds of thousands, and possibly up to 10 million, times greater sensitivity compared to a standard test, called an immunoassay.

This improvement would allow health care workers to identify, quarantine and treat Ebola-infected people earlier than previously practical – possibly several days before they become contagious and begin to exhibit symptoms. The researchers expect the test results to be readable on a smartphone.

Chou and colleagues at the Food and Drug Administration (FDA) and the U.S. Army Medical Research Institute for Infectious Diseases (USAMRIID) recently received a $5.6 million grant to further develop the M-plate Ebola Virus Assay. The collaborators hope to develop a deployable version in about three years.

Princeton scientists including Chou and his key collaborator, Associate Research Scholar Liangcheng Zhou, have worked on the M-plate for six years. The M-Plate’s surface consists of a thin layer of gold studded by hundreds of glass pillars just 60 nanometers across – about a thousandth of the width of a human hair. Gold particles measuring about 10 to 15 nanometers dot the pillars, which also sport large gold caps, making them look somewhat like mushrooms.

This tiny, complex architecture captures and boosts light signals. In the M-plate Ebola Virus Assay, light is generated when viral proteins in a sample are captured by a specialized protein preloaded into the assay. The captured viral proteins are then tagged with an “optical label,” which are molecules that glow, or fluoresce, when a beam of ultraviolet light shines on them. Thanks to the light-amplifying properties of the M-plate, the researchers anticipate that only a very small amount of viral protein need be in the bodily fluid sample to generate sufficient fluorescent light for positive identification.

A low threshold for detection is important because when a person first becomes infected with the Ebola virus, the amount of viral protein in their blood, urine and saliva starts off small. As the pathogen invades its human host’s cells and replicates, viral levels rapidly escalate. Yet the virus’ presence often remains undetectable by traditional immunoassay until after the initial symptoms of a fever, sore throat, headaches and muscle pain have already set in, anywhere from two to 21 days post-infection, by which time the disease can be spread to others and spur an epidemic.

Another test, known as real-time polymerase chain reaction (RT-PCR), can also provide early detection – sometimes a day before symptom onset – but has drawbacks, including cost and complexity.

The researchers believe it should be possible to use the M-Plate technology to develop a test that is simpler and less expensive than the PCR version but also provides more lead time.

“Our grand goal is to have the M-plate Ebola Virus Assay make diagnoses before symptoms show up,” said Chou.

“Better, rapid tests that can quickly tell us who is and who is not infected will greatly improve our ability to respond effectively to future outbreaks of Ebola or similar epidemics from infectious diseases,” said Arthur Reingold, professor and head of epidemiology at the University of California Berkeley School of Public Health, who is not part of Chou’s research effort.

While work on the M-Plate sensor continues at Princeton, the FDA will contribute its expertise in the study of Ebola virus detection antibodies and USAMRIID will advance the testing through its program of Ebola virus prevention and treatment research on nonhuman primates in its biosafety level 4 laboratories, the highest level of biosafety precaution.

Although sporadic outbreaks of viruses such as Ebola that cause hemorrhagic fevers in humans have been documented since the late 1960s, the largest epidemic in history struck just three years ago. Largely contained now, the Ebola outbreak has killed more than 11,300 people, mainly in Liberia, Sierra Leone and Guinea. Due to drops in trade, foreign investment and tourism, the epidemic has had severe economic consequences throughout Western Africa.

Numerous treatments, such as vaccines, and better lab and field tests like the M-plate Ebola Virus Assay, are in the works. The hope is that when the next outbreak happens, the world will be far better prepared, said Chou. Chou envisions that his testing apparatus will also be further expanded to detect Ebola’s deadly cousins such as Sudan virus, as well as the closely related Marburg virus and other deadly viruses.

“We want to do point-of-care as soon as possible,” said Chou. “Early detection of the Ebola virus will give us tremendous advantages in halting would-be epidemics in their tracks.”