Drastic changes in climate policy under the Trump administration should not cause environmental advocates to lose hope, a panel of experts said at a recent symposium at Princeton University’s Andlinger Center for Energy and the Environment.

Even though the administration and Congressional leaders have begun to reverse policies aimed at reducing atmospheric carbon emissions, the panelists said that many opportunities remain to push policies and technologies to mitigate climate change. In fact, a number of technologies, from solar power to increased energy efficiency, already have momentum that may be unstoppable.

“This issue will not go away,” said David Hawkins, director of the Climate Program at the Natural Resources Defense Council. “The business community knows that it won’t go away. The markets believe in climate change because the markets are anchored in reality.”

Hawkins was part of a panel at the symposium, “Energy for a Carbon-Constrained World,” which was held April 3 to celebrate the career of Robert Williams, senior research scientist and head of the Energy Systems Analysis Group at the Andlinger Center. Williams retired from Princeton this year after a 47-year career during which he received a MacArthur Fellowship for groundbreaking research into sustainable energy development. 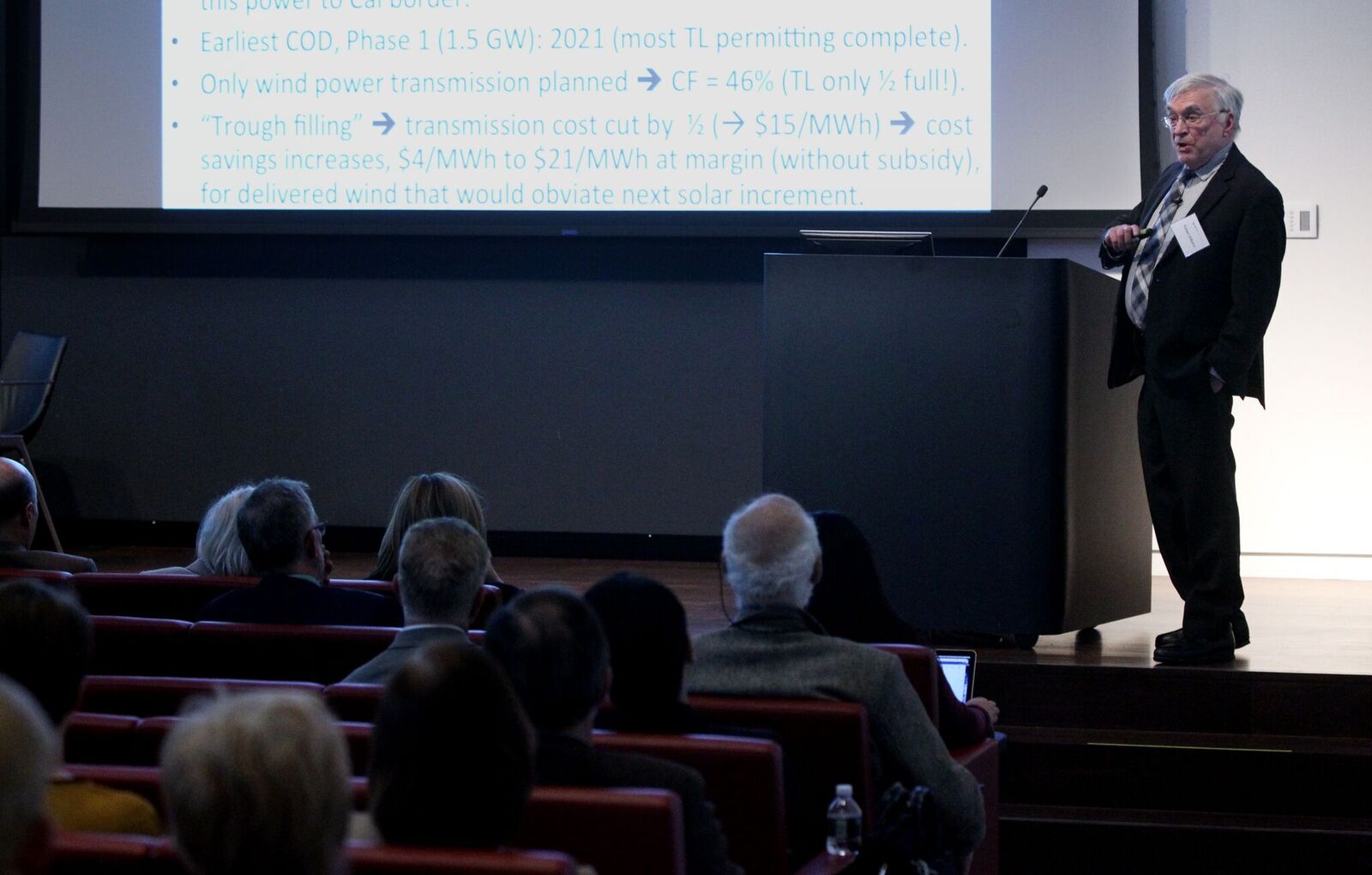 The all-day event, held at the center’s Maeder Hall, featured 18 speakers from academia, government and industry. Presentations included topics such the explosive growth of wind and solar energy, new technology for carbon capture and sequestration, and the impact of renewable energy on the electric grid.

“These topics are central to our mission,” said Yueh-Lin (Lynn) Loo, director of the Andlinger Center and the Theodora D. ’78 and William H. Walton III ’74 Professor in Engineering. “It is a rare occasion to have so many world leaders in the energy field gathered here.”

At the afternoon panel that focuses on climate policies under the Trump administration, participants discussed state-level efforts, such as California’s low-carbon-emissions vehicle standards, and market-based solutions involving efficiencies in home appliances, including those using low-carbon technologies, such as solar and wind power. The panelists also discussed non-technical solutions including the use of lawsuits to prevent the reversal of current environmental policies and regulations.

“We are facing a truly extraordinary situation in the United States,” said John Holdren, the Teresa and John Heinz Professor of Environmental Policy at Harvard University who served as chief science adviser to President Barack Obama. Holdren said the Environmental Protection Agency, which had taken the lead in climate change policy, is now headed by Scott Pruitt, a longtime opponent of the agency who does not believe that human activity or atmospheric carbon dioxide are primary causes of global warming. The new administration, he said, has “appointed climate change wafflers in other positions, people who admitted in their confirmation hearings that climate change is happening, but really don’t know how much humans have to do with it.”

On a more hopeful note, panelist Brad Crabtree, vice president of fossil energy at the Great Plains Institute, described his experience helping to form the National Enhanced Oil Recovery Initiative, a coalition that includes politicians, fossil fuel companies and environmental groups. The process of enhanced oil recovery injects captured carbon dioxide into old wells and drives out oil that is difficult to extract by normal means. The carbon dioxide is then recaptured and sequestered. 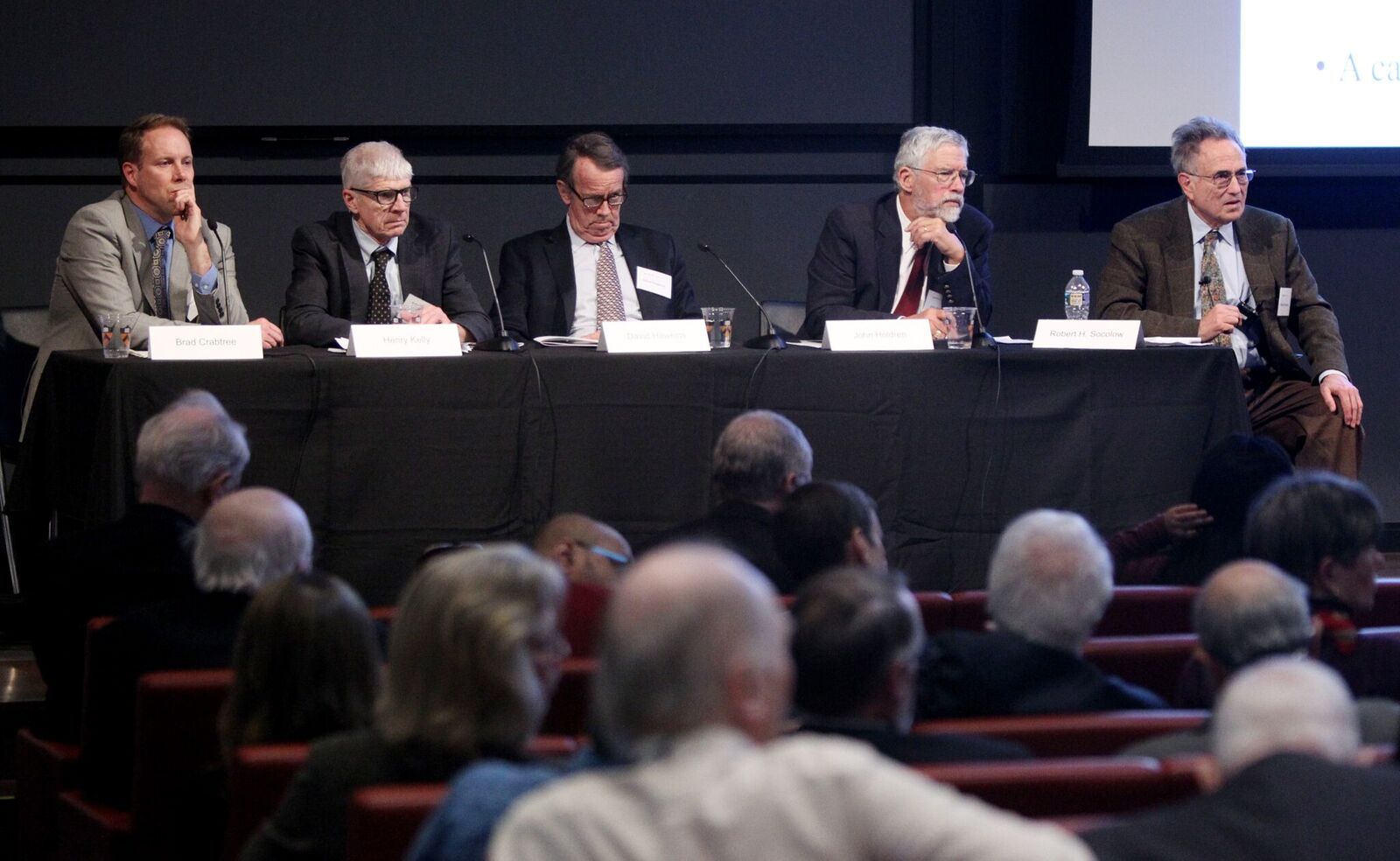 Michael Celia, the Theodora Shelton Pitney Professor of Environmental Studies and a professor of civil and environmental engineering at Princeton, has studied the viability of storing carbon dioxide in underground geological formations and concluded that the technology is viable. He said research has indicated that leakage of carbon dioxide from old wells “appears to present minimal risk” and that overall risks associated with underground carbon storage appear to be manageable.

Other topics at the symposium included transportation and non-vehicular energy efficiency standards. For transportation, transitioning from fossil fuels is likely to take decades and require long-term government commitment in policy and funding, said Joan Ogden, professor of environmental science and policy at the University of California-Davis. Ogden touched on hydrogen fuel cells, autonomous vehicles and even virtual reality as future ways to reduce carbon emissions in transportation.

Energy efficiency that does not involve vehicles could prove the best solution in the short run, said Howard Geller, executive director of the Southwest Energy Efficiency Project in Boulder, Colorado. Geller said it is possible to squeeze enormous energy savings from common appliances,such as clothes dryers and dishwashers. A clear example of how energy efficiency can have an impact is the refrigerator, which has grown in volume and yet decreased in energy use and cost over the decades, he said.

Williams, the symposium honoree, cautioned that there will not be one solution to climate change. He spoke of his research combining wind power with hydrogen-fired generators as backup for periods of calm winds. In Wyoming, he said, it would be possible to generate substantial electric power from wind. The region’s abundant natural gas could be converted to hydrogen and the byproduct carbon dioxide captured and stored. Hydrogen could fire turbine generators to provide additional zero-carbon electricity which, along with the wind power, could be sold to California utilities along a transmission line planned for the region. Finally, the captured carbon dioxide could be sold for enhanced oil recovery.

“It will take many solutions to reach a world where energy is provided in a sustainable way,” he said.

Robert Socolow, professor of mechanical and aerospace engineering, emeritus, and a senior research scholar in the Andlinger Center and the Princeton Environmental Institute, said that efforts to preserve the climate would continue for decades, and he called on younger audience members to accept that challenge.

“We are passing the baton today,” said Socolow, who chaired the afternoon panel. “My generation is saying we have more work to do. There needs to be another generation with a fresh set of ideas. This is a multigenerational project ‚Äî trying to live on a small planet.”