If the advent of computers launched the Information Age, the ability to engineer tiny machines from molecules could define the coming decades.

In a testament to the rapid advance of nanotechnology, the 2016 Nobel Prize in Chemistry was awarded to scientists who built the world’s first synthetic molecular machines by interlocking single molecules into devices capable of mechanical motion.

Now, a discovery by Princeton University scientists, reported Aug. 2 in the Journal of the American Chemical Society, demonstrates that humans don’t have the monopoly on building the world’s tiniest machines. The Princeton researchers found a lasso-shaped bacterial molecule capable of altering its configuration when exposed to heat, a shape-changing ability akin to that used to operate certain synthetic molecular machines. The lasso is a type of molecular chain known as a peptide.

“The discovery of this lasso peptide, which we named benenodin-1, demonstrates that we might look to biology as well as engineering for source material in developing molecular devices,” said A. James Link, an associate professor of chemical and biological engineering at Princeton who was the senior author on the paper.

While the applications are still mostly speculative, the potential uses for molecular machines are enormous, spanning everything from microrobots that deliver drugs in the human body to new types of materials that adapt in real time to environmental changes such as fluctuations in heat, light or moisture.

The first major advances in building molecular machines came in the 1980s, when chemist Jean-Pierre Sauvage was able to build mechanically connected molecules by linking together two molecular rings. This contrasted with the classic technique of connecting molecules through covalent bonds, a chemical bond in which molecules fasten by sharing electrons.

In the early 1990s, another scientist, Fraser Stoddart, created a new structure, called a rotaxane, by threading a molecular rod through a ring of molecules and securing it in place. The ring could move up and down the rod, but wouldn’t fall off due to stoppers Stoddart added to each end of the rod. Since their advent, rotaxanes have been used to create a nanoscale lift, an artificial muscle and even a tiny computer. Sauvage and Stoddart shared the 2016 Nobel Prize in Chemistry with another scientist, Bernard Feringa, who built molecular motors, including one capable of spinning a tiny glass rod that was 10,000 larger than the machine itself.

While the molecular machines built by Sauvage, Stoddart and Feringa were synthesized in laboratories, Link and his Princeton colleagues have looked to nature for nano-engineering inspiration.

Link’s team has developed methods of searching the DNA sequences of organisms for evidence that they might produce peptides. Like their larger cousins, proteins, peptides are chains of linked amino acids.

In particular, Link has focused on discovering lasso peptides, a class of molecules distinguished by a slip-knot like shape, where a long “tail” section of the molecule pokes through a “ring” section. The name for this class of peptides stems from the similarity in their structure and that of lariat knots used in cowboy lassos. Their structure makes lasso peptides highly stable, an important biological characteristic. Held together through mechanical bonds, the lasso peptides also resemble Stoddart’s ring-and-rod rotaxane structures, and are thus classified as rotaxanes.

Some lasso peptides have antimicrobial properties and may represent a new type of antibiotics, an area Link’s laboratory is exploring. The peptides’ rotaxane structure also makes them possible candidates for building molecular machines.

The Princeton team discovered the lasso peptide benenodin-1 while exploring the DNA of Asticcacaulis benevestitus, a soil proteobacterium from Russia’s Ural Mountains. When exposed to heat, many naturally occurring lasso peptides become unthreaded, with the tail portion of the molecule slipping out of the ring. When the Princeton researchers exposed benenodin-1 to heat, they were surprised to find that the molecule changed shape, but maintained its slip-knot confirmation.

“This ability to change shape without unthreading is intriguing,” said Link. “Both conformations maintain the rotaxane structure, which makes it the first example of a switchable, mechanically interlocked molecule found in nature.”

“It raises questions about whether there is an evolutionary explanation for this behavior and whether other such switching molecules might exist in nature,” he said. 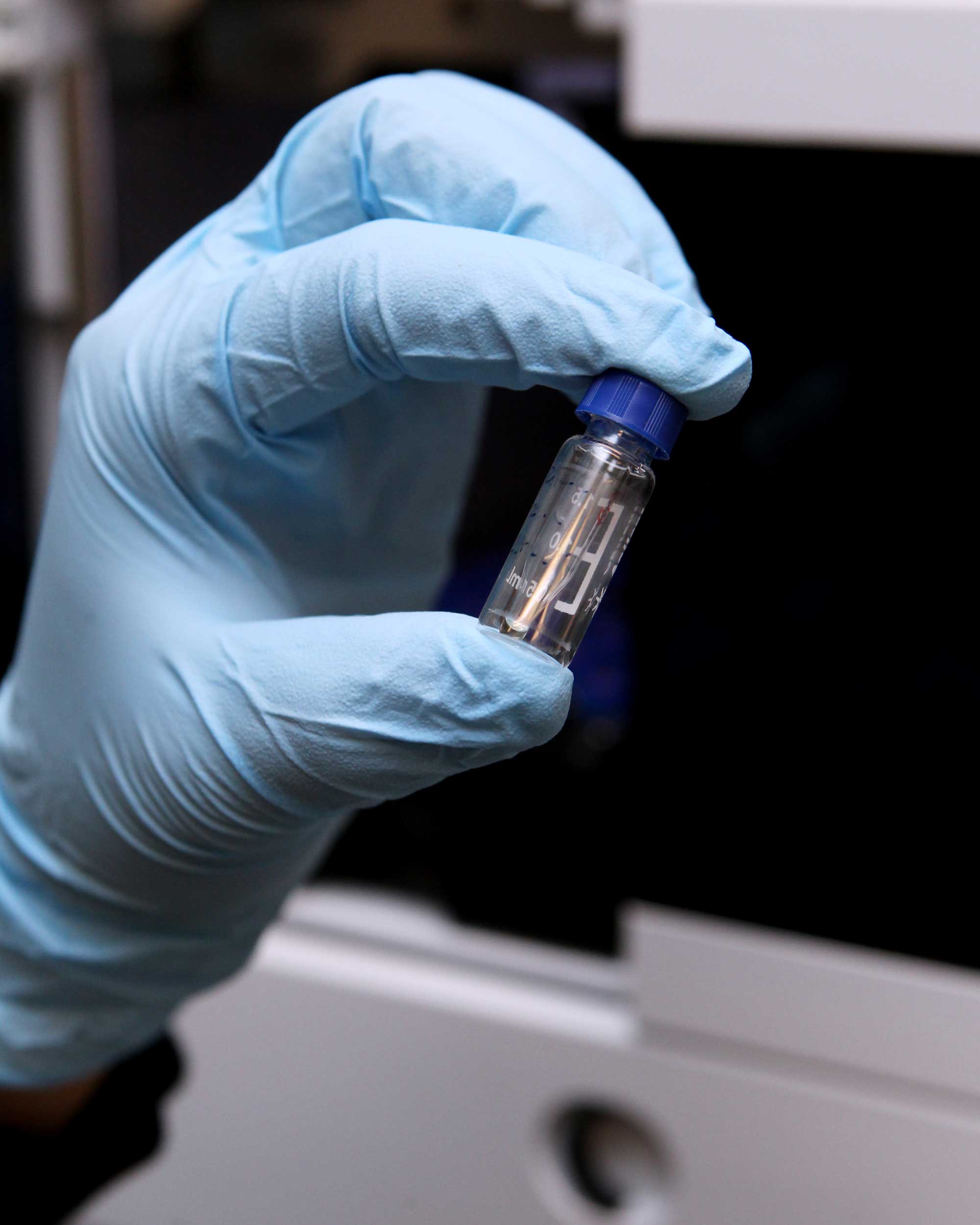 Link and his colleagues also found other intriguing changes in benenodin-1’s chemical behavior that were triggered by heat. Before heat exposure, the lasso peptide could be chopped up by an enzyme called benenodin-1 isopeptidase. But after heating changed the lasso peptide into its new configuration, it was no longer affected by the enzyme. Link said this difference in how the enzyme functions under different temperatures might translate into changes in biological function, a phenomenon that could play a role in how climate change impacts microbial communities in the soil.

The Princeton team plans to explore whether the switching property of benenodin-1 might be use in practical applications, such as binding metal pollutants to help with environmental cleanup.

The peptide might also provide a natural source for the building blocks of nanostructures in which two molecular rings are physically looped together. Researchers are exploring whether these nanostructures could be used for building molecular electronic devices and sensors. For instance, they might be used as thermal sensors that would indicate when a package of thermally sensitive materials such as medicines has been exposed to heat.

“The discovery of this natural switching property in a lasso peptide opens many new avenues for research, from exploring the evolution of peptides and enzymes, to the use of natural products in nanotechnology,” Link said.

Other authors on the paper were Chuhan Zong, a doctoral student in chemistry, and recent undergraduate students Michelle Wu, Class of 2014, and Jason Qin, Class of 2016. The research was supported by the National Institutes of Health and senior thesis funds from the School of Engineering and Applied Science. 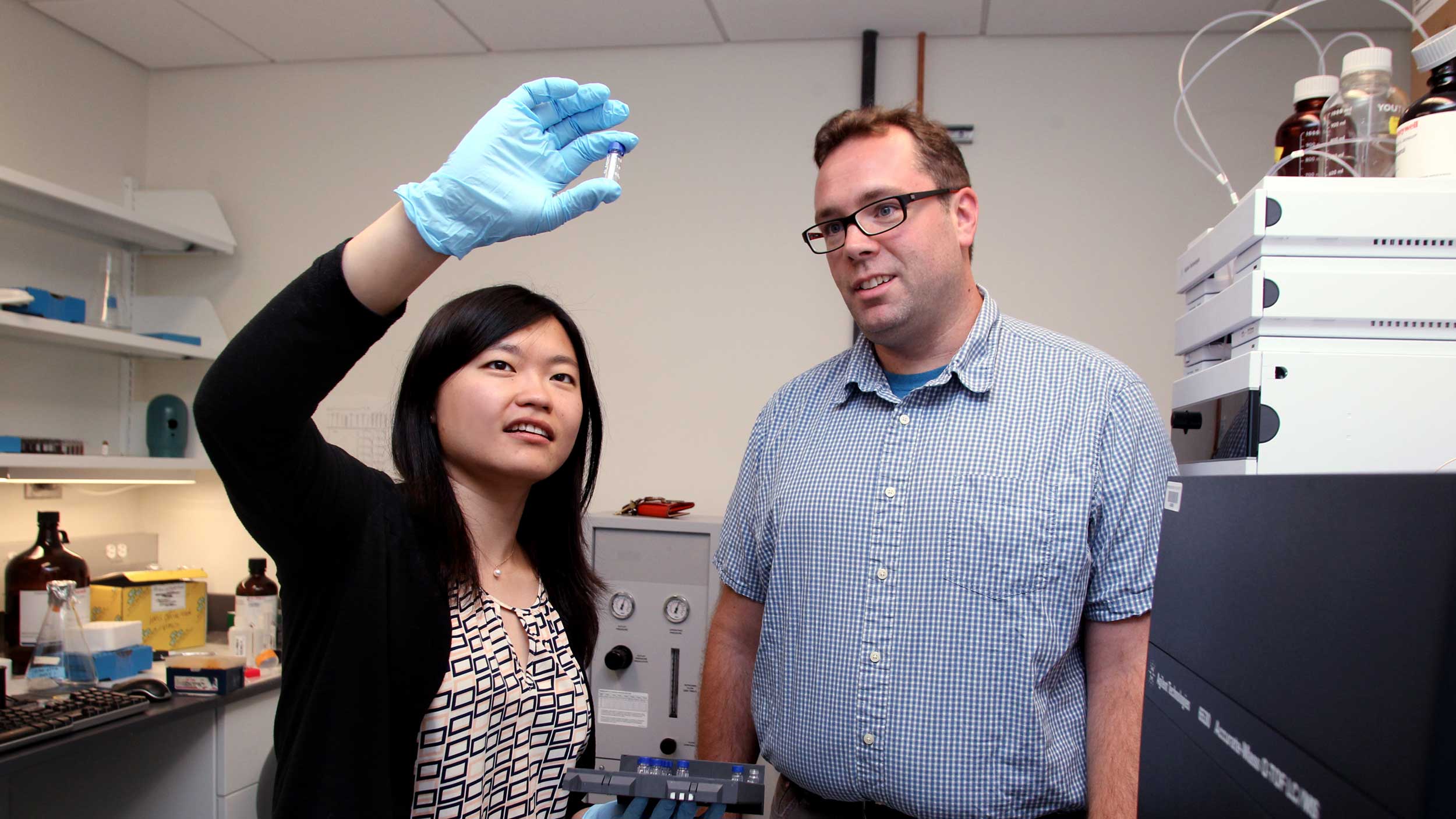