Despite the U.S. leaving the Paris Agreement on climate and the Environmental Protection Agency's march to roll back rules on clean air and other safeguards, there are tangible reasons to be hopeful about our environmental future, according to Fred Krupp, president of the Environmental Defense Fund. 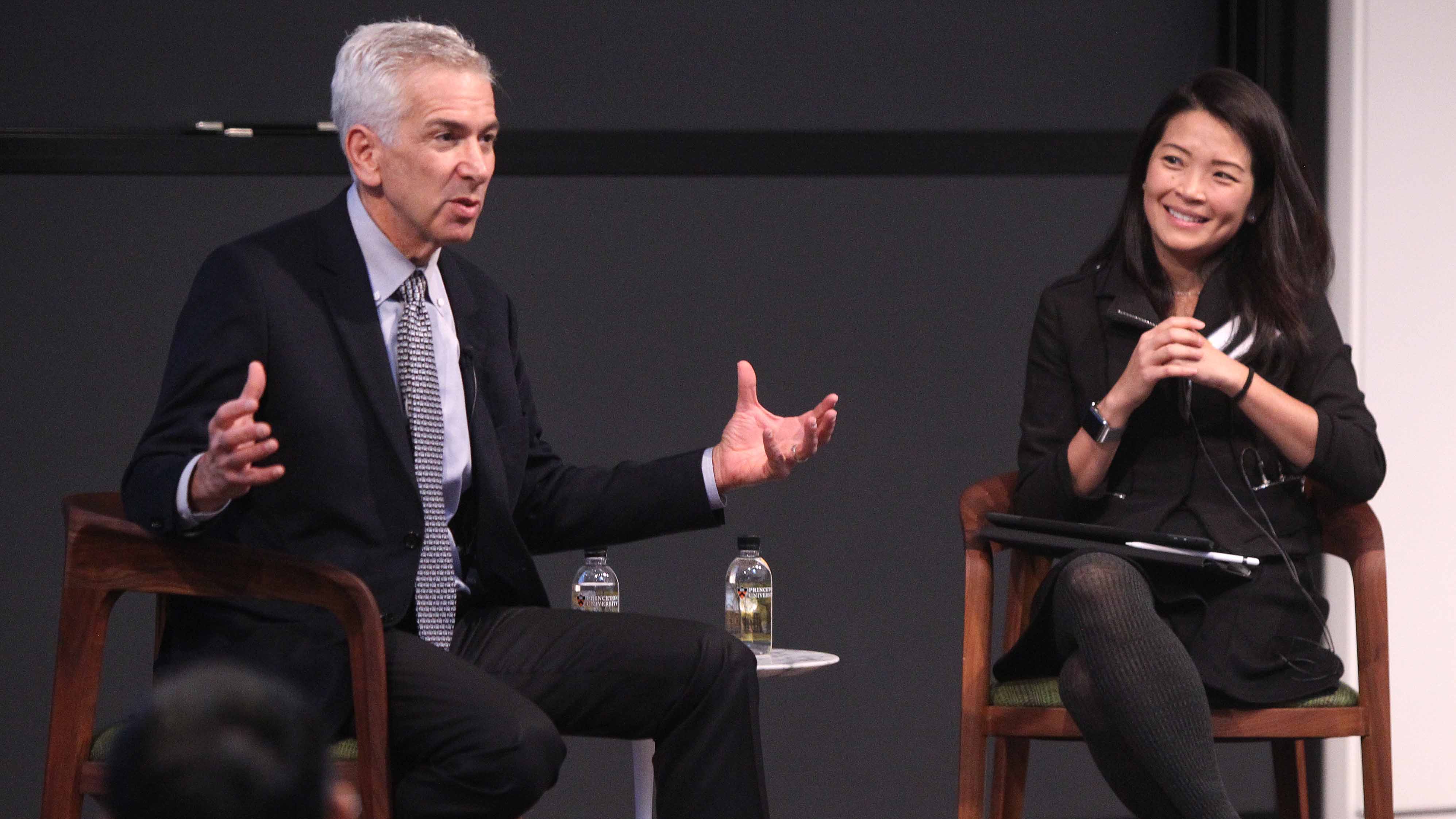 “I think there are three megatrends that can drive us towards clean energy and a stable climate, if we work with these trends, if we figure out ways to harness these trends,” said Krupp, who was the keynote speaker on November 10 at the Annual Meeting for the Andlinger Center for Energy and the Environment and Princeton E-ffiliates Partnership at Princeton University.

Krupp listed the three emerging trends as: forward-thinking multi-national companies are becoming leaders in reducing greenhouse gas emissions and using resources more efficiently; innovation in energy technologies is picking up pace; and leaders from public and private sectors across the globe are acknowledging the end of unlimited, free climate pollution and the need for a price on carbon.

“All this progress doesn’t mean that ice sheets in Greenland have stopped melting or that the amount of CO2 in our atmosphere has stopped rising,” he said. “The challenge before us remains immense, but with this momentum, we still have a chance to win this race.”

The wide-ranging and hopeful speech kicked off the Annual Meeting at the center, a day-long event, which featured talks and panels on leading-edge energy and environmental solutions and the science and policy for preparing coastal regions against damaging storms and rising sea levels.

E-ffiliates, a corporate membership program administered by the center, seeks to spark innovation in energy and the environment through close collaboration between Princeton researchers and industry.

During his speech, Krupp pointed out the Environmental Defense Fund’s own history in engaging with large corporations to cut waste. For example, the New York-based organization is working with Walmart extensively to reduce one billion tons or a gigaton of emissions within their supply chain by 2030 and eliminate harmful chemicals from products.

As for technologies, Krupp pointed out the rapid drop in cost of wind and solar technologies, the inevitable adoption of electric vehicles, and new ways to monitor and analyze pollution to inform policy and hold polluters accountable. One example of this is the Environmental Defense Fund’s partnership with Google to add pollution sensors to the cars that Google drives through streets throughout the world to capture its “street view” images. Krupp also explained that putting a price on carbon is imperative for the planet’s future, pointing to China’s national carbon market set to open by the end of this year.

“We will solve the carbon problem. The only question is if we do it in time,” he said.

“At the Andlinger Center, faculty, researchers, and students are doing their part to accelerate the course towards a carbon-neutral world,” said Yueh-Lin (Lynn) Loo, the center director, Theodora D. ’78 and William H. Walton III ’74 Professor in Engineering, and professor of chemical and biological engineering.

Loo said the center’s new strategic plan includes fostering multi-investigator teams to work on solutions-oriented projects to tackle crucial energy and environmental issues, and hiring faculty who hold expertise in systems- and process-level expertise at the energy-water nexus, long-term energy storage, and smart and resilient cities. The center is also bringing in fresh perspectives from practitioners through the new Gerhard R. Andlinger Visiting Fellows Program and researchers via the Distinguished Postdoctoral Fellows Program. She also announced a new partnership with the World Economic Forum to develop an executive education module to inform the Young Global Leaders cohort on energy innovations and environmental considerations.

Other speakers presented research on the next wave of energy technology solutions, such as the electrification of transportation, fast charging electric car batteries, and new systems to cool buildings more efficiently. There were also presentations on the ties between air pollution and the efficiency of solar electricity production, risk assessment of extreme storm surges and rainfall flooding, and an economic analysis of how rising sea levels will impact population redistribution in coastal cities.

“As PV [photovoltaics for solar energy] is deployed, some type of cleaning would be helpful in dusty, desert regions,” said Denise Mauzerall, professor of civil and environmental engineering and public and international Affairs, Woodrow Wilson School of Public and International Affairs. Her research unveiled that both air pollution and dust on solar panels significantly decrease expected yields from photovoltaic systems. 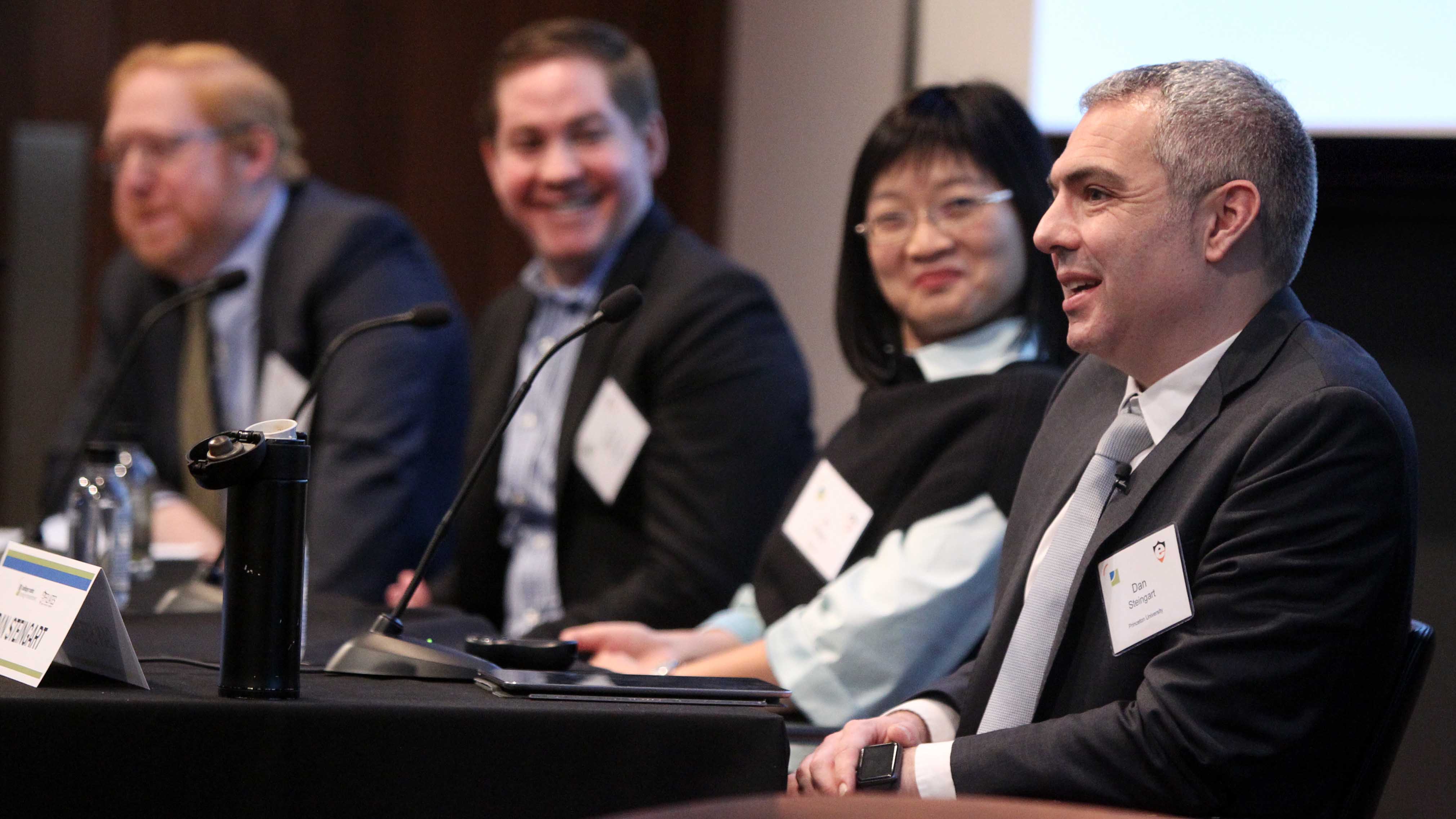 A morning panel, moderated by Daniel Steingart, associate professor of mechanical and aerospace engineering and the Andlinger Center for Energy and the Environment, focused on the future of electrical vehicles and their benefits and challenges. Topics touched included fast charging batteries, range anxiety between charging stations, autonomous vehicles, and the integration of smart technologies into electric cars.

“Cars will be connected. All charging stations will be connected,” predicted Xi Zhang, head of the Embedded Networks Research Group at Siemens. “There will be a lot of smart routing to reduce traffic congestion.”

The afternoon featured a panel on designing and building resilient coastal infrastructure, which was moderated by Elie Bou-Zeid, associate professor of civil and environmental engineering and director of the Program in Environmental Engineering and Water Resources. Panelists discussed this year’s string of damaging hurricanes, FEMA’s National Flood Insurance Program, building for climate adaptation, and other topics.

“We are going to make tough choices in the future,” said Robert Freudenberg, vice president for Energy & Environment at Regional Plan Association, about climate adaptation projects along coastal areas. “We can’t protect every community in the region. We have to decide to protect areas that are dense or protect shore communities that don’t have as much economic activity.” 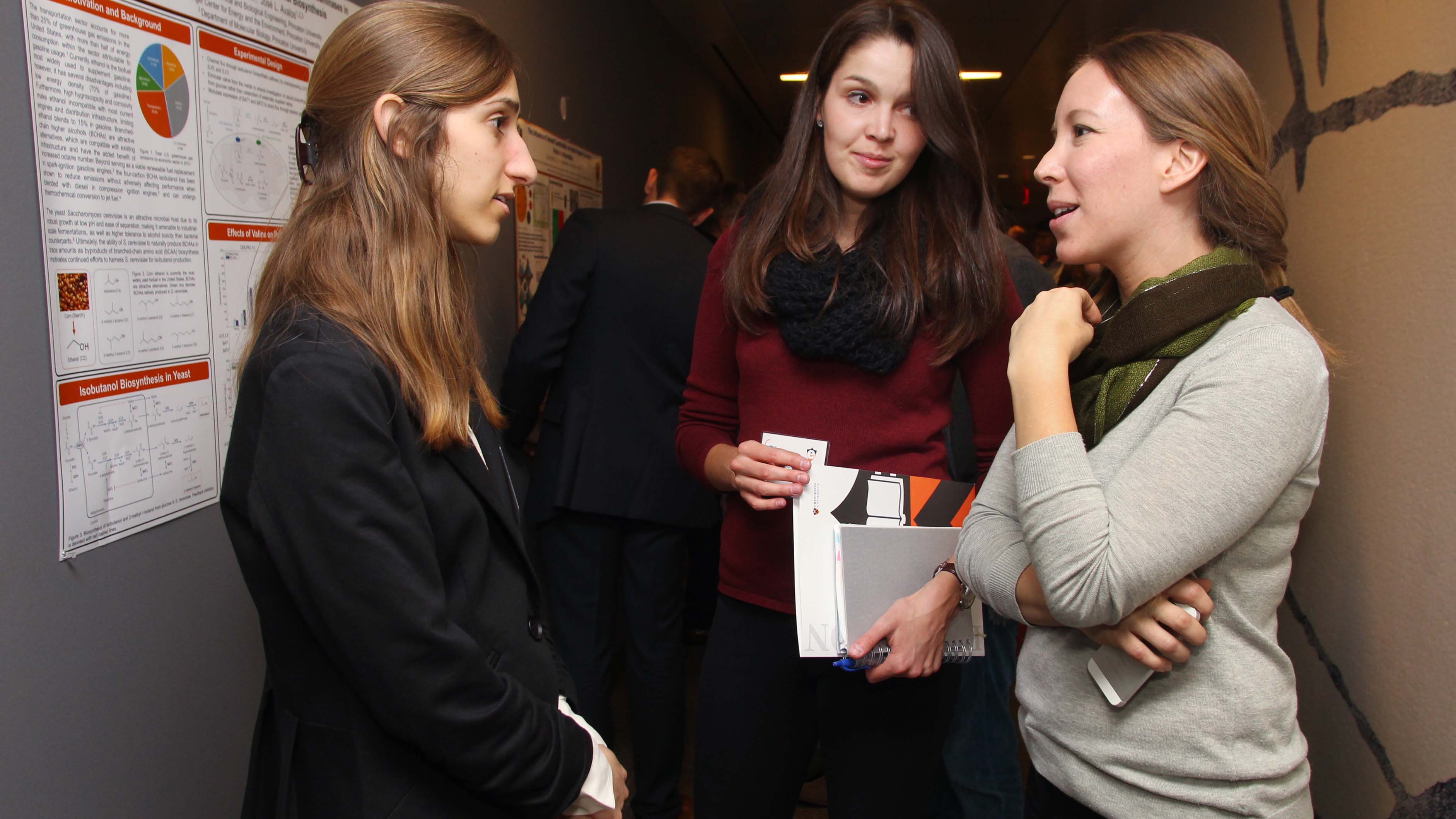 The event concluded with a reception and a poster competition highlighting research from 36 undergraduates, graduate students, and postdoctoral researchers. William “Will” Atkinson ’18 and Samuel Smiddy ’18 both were awarded the PSEG Undergraduate Student Poster Award. Atkinson’s poster focused on carbon in soil while Smiddy’s research was on hydraulic fracturing. Hongshan Guo won the ExxonMobil Graduate Student Poster Award for her work on geothermal energy. Nicholas Houchois won the ExxonMobil Postdoctoral Poster Award for his work on developing a sensor that measures radiant temperature to make occupants more comfortable.

“These students and researchers are at the forefront to make disruptive changes in energy and environment technologies,” said Mark Zondlo, associate director for external partnerships at the Andlinger Center and associate professor of civil and environmental engineering. “By engaging with practitioners, they more efficiently change the marketplace and help to solve today’s climate and energy problems.” Indeed, as keynote speaker Fred Krupp indicated, there are many reasons to be hopeful.

For more information on the Andlinger Center for Energy and the Environment at Princeton University, contact Sharon Adarlo, communications specialist, at sadarlo@princeton.edu or (609) 258-9979.