Irvin Glassman, the Robert H. Goddard Professor of Mechanical and Aerospace Engineering, Emeritus, has been awarded the 2018 Daniel Guggenheim Medal for his influential contributions to the fields of combustion and propulsion.

“Professor Glassman is a legendary combustion expert whose writings and contributions to the understanding of fundamental combustion processes has enabled engineers and scientists to improve the performance of propulsion and power generation systems, while minimizing their adverse environmental effects,” Ben T. Zinn, a professor at the Georgia Institute of Technology, said in his letter nominating Glassman for the award.

The Daniel Guggenheim Medal was established in 1929 to honor innovators who make notable achievements in the advancement of aeronautics. Its first recipient was Orville Wright. The medal is jointly sponsored by the American Institute of Aeronautics and Astronautics (AIAA), American Society of Mechanical Engineers (ASME), SAE International (originally the Society of Automotive Engineers) and the Vertical Flight Society (originally the American Helicopter Society). 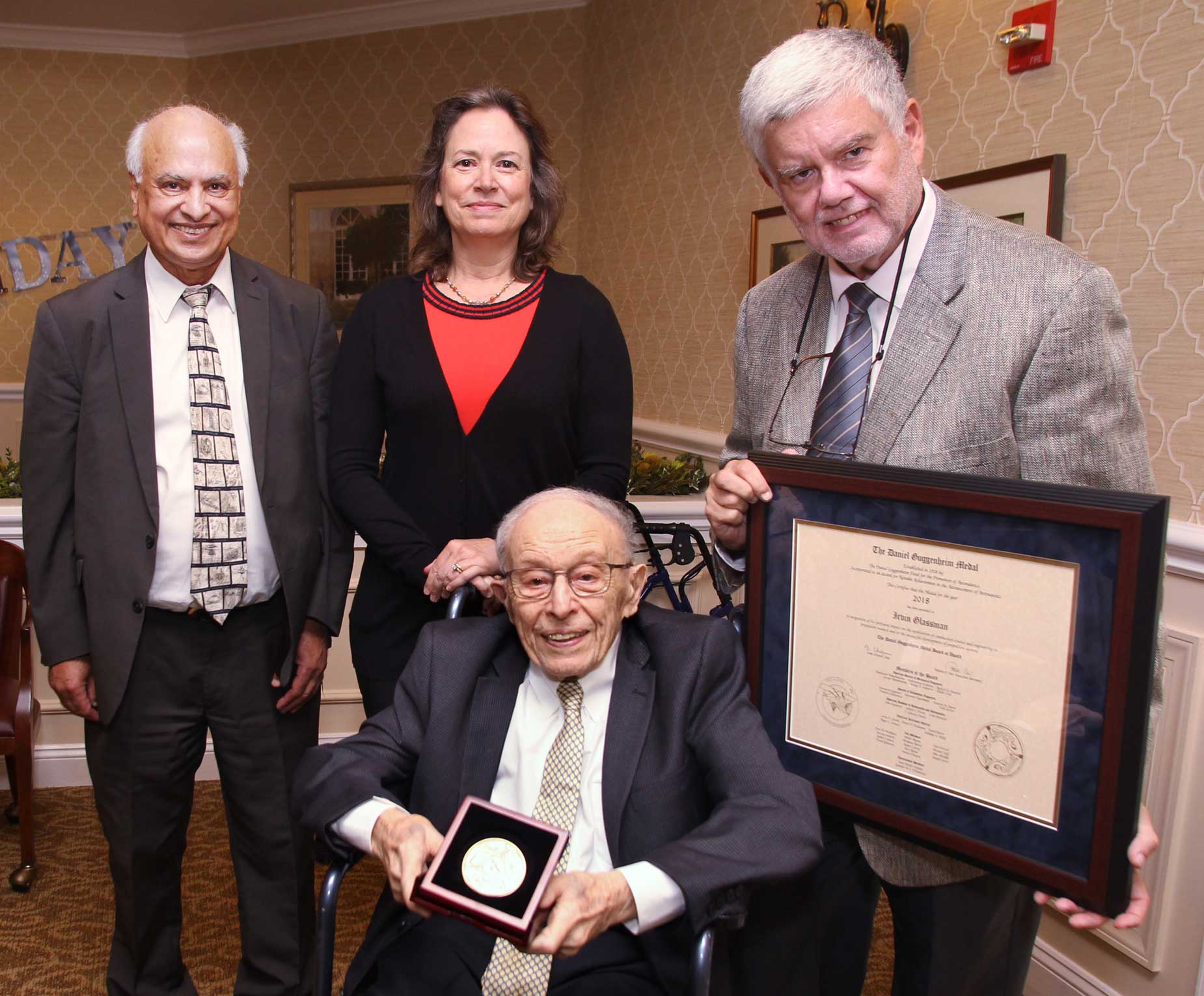 Glassman received the award and colleagues at Princeton celebrated his achievement at a reception on August 18.

“Irv, the legacy you built here at Princeton lives on in the strength of the MAE department and, indeed, the larger School of Engineering and Applied Science,” Dean Emily A. Carter said at the event. Carter, the Gerhard R. Andlinger Professor in Energy and the Environment, is also a faculty member in the Department of Mechanical and Aerospace Engineering.

“As dean, I speak for all of your SEAS colleagues in saying congratulations and thanks for all you did for Princeton and indeed for the world,” she said.

“If future historians were to write the impact of chemical propulsion and fundamental combustion on humanity in the second half of the 20th century, Professor Glassman would be the singular person who represents the coming of age of the discipline, particularly the robustness of combustion chemistry,” said Chung K. Law, the Robert H. Goddard Professor of Mechanical and Aerospace Engineering at Princeton.

Santoro also added, “A measure of his impact is that 21 of the 35 of his graduate students awarded Ph.D.s were or are faculty members at major universities. At least two in that group, like Professor Glassman, have been elected to the National Academy of Engineering. In addition, five of his former research staff also now hold faculty positions and I am proud to be one of them.”

“He is widely recognized as an inspirational faculty member devoted to the teaching of fundamentals – and doing so in a manner that instills fascination in his students and the application of basic knowledge,” said Norman R. Augustine, retired chairman and chief executive officer of Lockheed Martin Corporation.

Known affectionately by his colleagues as the “Grand Old Man of Combustion,” Glassman is the Robert H. Goddard Professor of Mechanical and Aerospace Engineering, Emeritus, at Princeton. He retired from the department in 1999 after 49 years. He received his B.E. (1943) and Dr.Eng. (1950) in chemical engineering from Johns Hopkins University.

He joined Princeton University in 1950 as an assistant professor and was awarded tenure in 1958. Promoted to full professor in 1964, Glassman was appointed to the Goddard professorship in 1988. He was elected a member of the National Academy of Engineering in 1996.

He is an AIAA Fellow and a member of the New York Academy of Sciences. He was the advisor to numerous universities, NASA, the Army, NATO, the Office of Naval Research, the National Institute of Standards and Technology, the State of New Jersey and many industries, most notably United Technologies Corporation, where he chaired two scientific advisory committees.