Majora Carter, an instructor of the Keller Center’s core design course, works to dispel the myth that creativity is pure inspiration that flashes like lightning across the imagination.

“The course focuses on the fact that creativity isn’t this inborn talent that only a few of us have, but you can literally learn to access it, if you’re willing to put in the work and develop the confidence to do so,” said Carter, who received a MacArthur fellowship in 2005 as the founder of the urban revitalization group Sustainable South Bronx. “​​The class works to unlock the potential for people to see themselves as creative and broaden that idea beyond pedestrian thinking about what a creator is.”

Carter is one of the instructors of “Creativity, Innovation, and Design,” a course required for the University’s entrepreneurship certificate. Largely formed by the center’s entrepreneurship specialist and iSuppli founder Derek Lidow, the course challenges students to think of novel ways to approach a range of problems.

In a recent session in a classroom in the University’s Entrepreneurial Hub on Chambers Street, instructor Jessica Leung posed a series of brain twisters to a class of 12 students. The first – what happened to 3 bodies in a cabin on a mountainside? – stumped the group. But by the third question – how does a bus driver avoid a ticket passing a stop sign, turning the wrong way? – the students were ready. 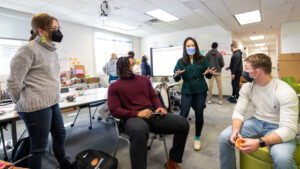 The course, Leung explained, presents students with new lenses through which to view problems.

“The goal is to broaden your perspective, to overcome your assumptions before they limit your options,” she said.

And the cabin question? It was a plane crash.