“I'm a Princeton engineer because I want to leave a positive impact on the world. With education from Princeton, I'm best positioned to do so in my graduate studies and professional career, as well as in my personal life.” 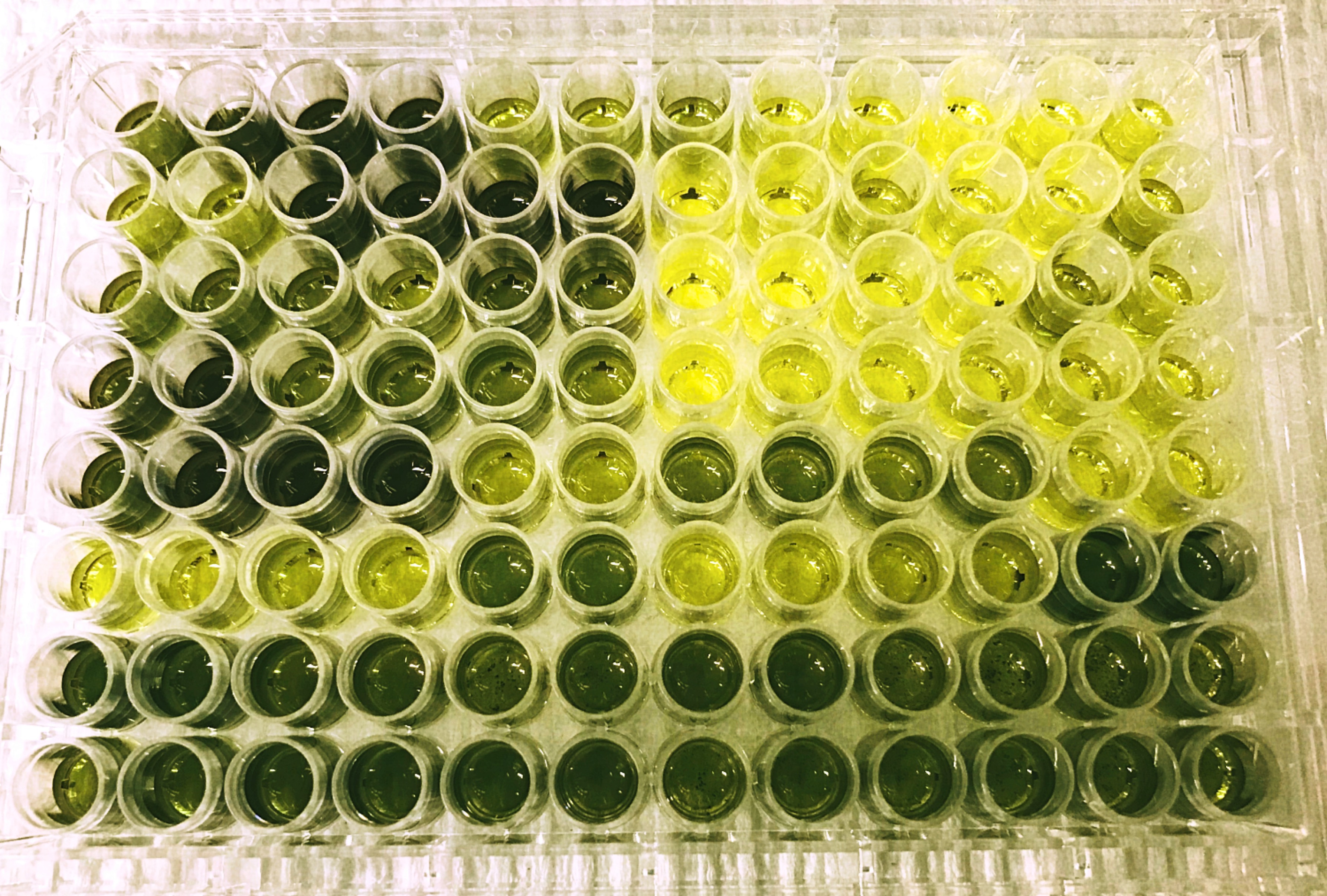 Colorimetric assays such as these are used in Clay’s research creating thin-film solar cells with metal halide perovskites.

Clay focuses on creating and optimizing innovative materials for solar cells, particularly metal halide perovskites. These thin-film materials, when used as active layers in solar cells, have the potential to complement existing silicon cell technology or to serve in niche applications not accessible by conventional silicon cells. Solar cells comprising perovskite active layers show further potential for growth by continued efforts in understanding fundamental aspects of the processing-structure-function relationships of the perovskite materials. Clay’s work focuses on understanding how the choice of processing solvent impacts perovskite structure and composition, and how changes to structure and composition affect the performance and stability of perovskite-based solar cells. This work involves deep research into chemical interactions and reactions as well as materials characterization, which is crucial to engineering the materials to be more stable and amenable to scalable processing.

Clay grew up in Littleton, North Carolina, a town of around 500 residents, where he was homeschooled from second grade until graduation from high school. He became interested in engineering while working with his dad framing houses, pouring concrete, and installing roofing. As a teenager, he would take his Jeep apart and experiment with putting it back together while continually making “upgrades” for off-road driving. The desire to understand how things work meshed with a passion for  chemistry and mathematics, as he wanted to leverage his education to “solve problems that are pressing to society, such as energy sustainability and security.”

Although he loved chemistry and math and excelled at self-guided exploration, he didn’t always know that he wanted to pursue education beyond a bachelor’s degree. Once he became involved in undergraduate research, he realized how much he enjoyed research. “It did not feel at that stage like work; it felt almost as if it were a hobby that I really enjoyed. I loved the people I worked with, and that culture of enjoyment of the work let me realize that so long as you enjoy the work, you should capitalize on that enjoyment to achieve your fullest potential.” 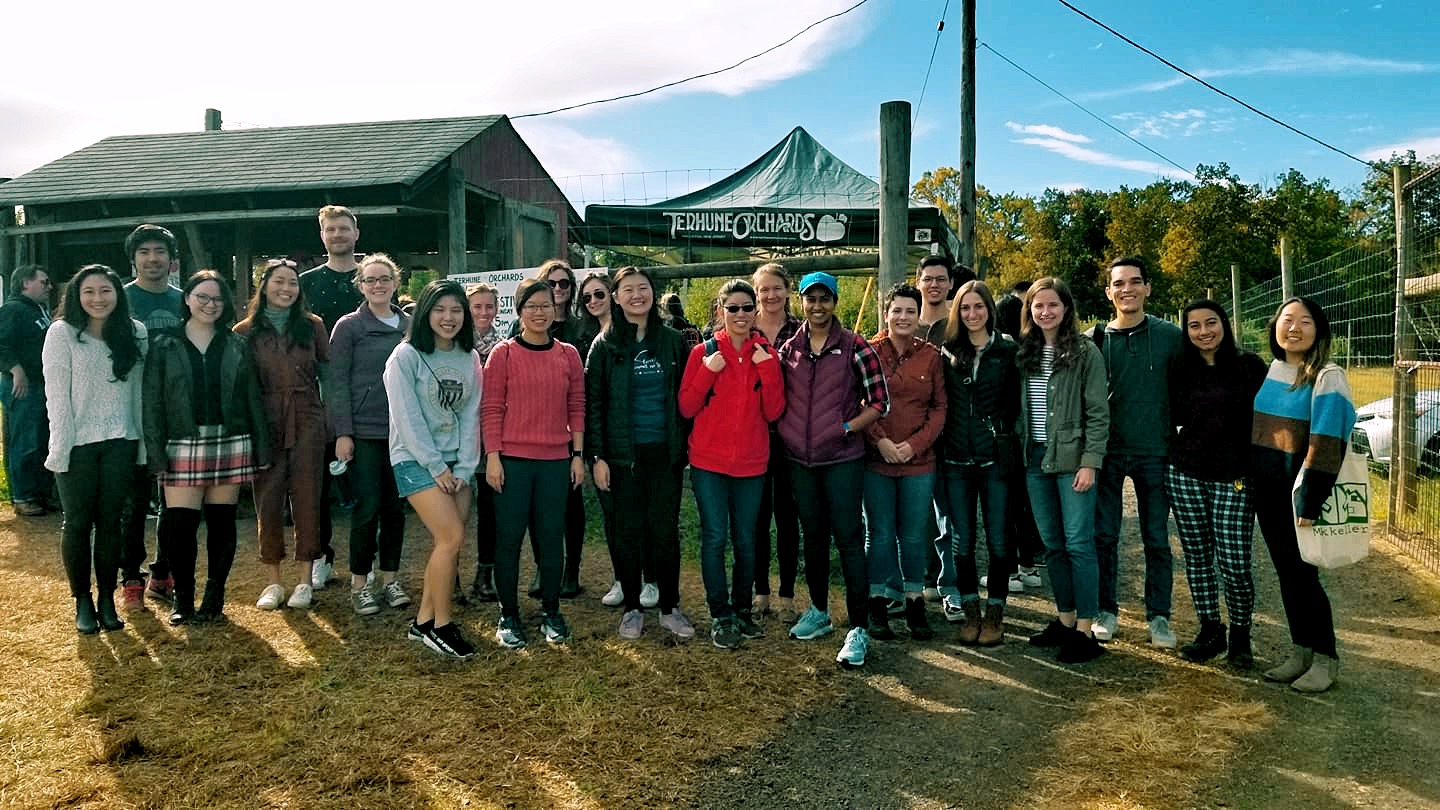 At Princeton, Clay has had mentors and collaborators across fields, which is indicative of a spirit of collaboration that he views as one of Princeton’s biggest strengths. “Princeton has some of the best people in just about every field. So I could talk to people in electrical engineering and chemistry, for example, who helped me to look at fundamental chemistry, device physics, and materials properties in different ways,” he said. Such collaborations helped him to move forward on his project during times when he got stuck or things were uncertain. “It takes effort on your part, persistence. You can’t quit or feel sorry for yourself. You just have to keep going.”

Beyond research, it was also important to Clay to be involved in his department, so he became a representative for his class of graduate students in CBE. He also served as the president of the Graduate Engineering Council for a term, acting as a liaison between graduate students and the administration. These opportunities helped him to build leadership skills and “build communication skills that you don’t always get to exercise in your engineering classes,” he said. “You have to put into perspective that your Ph.D. is a tiny little push in one tiny little direction of science as a whole,” he said. “I need to be able to effectively communicate what I’m doing as an engineer and scientist to people from all different walks of life.”

Initially, Clay had some misconceptions about Princeton that he had to overcome before deciding to choose it for graduate school. Coming from a small town, Clay was unsure about whether he would feel comfortable here. During his first days on a visit to the CBE department, he found “everybody was just so nice. It really seemed like it was just a great community. And all the students seemed as though they enjoyed their work,” he remembers. Ultimately that “community and culture of support” is what drew Clay to choose Princeton. The CBE department gives a “small town feel,” where he doesn’t feel like a number. He knows everyone in his group and is able to get personal attention from his advisor regularly. He encourages prospective students to choose an advisor and lab group to fit their personality, as a good match will help ensure support when needed. 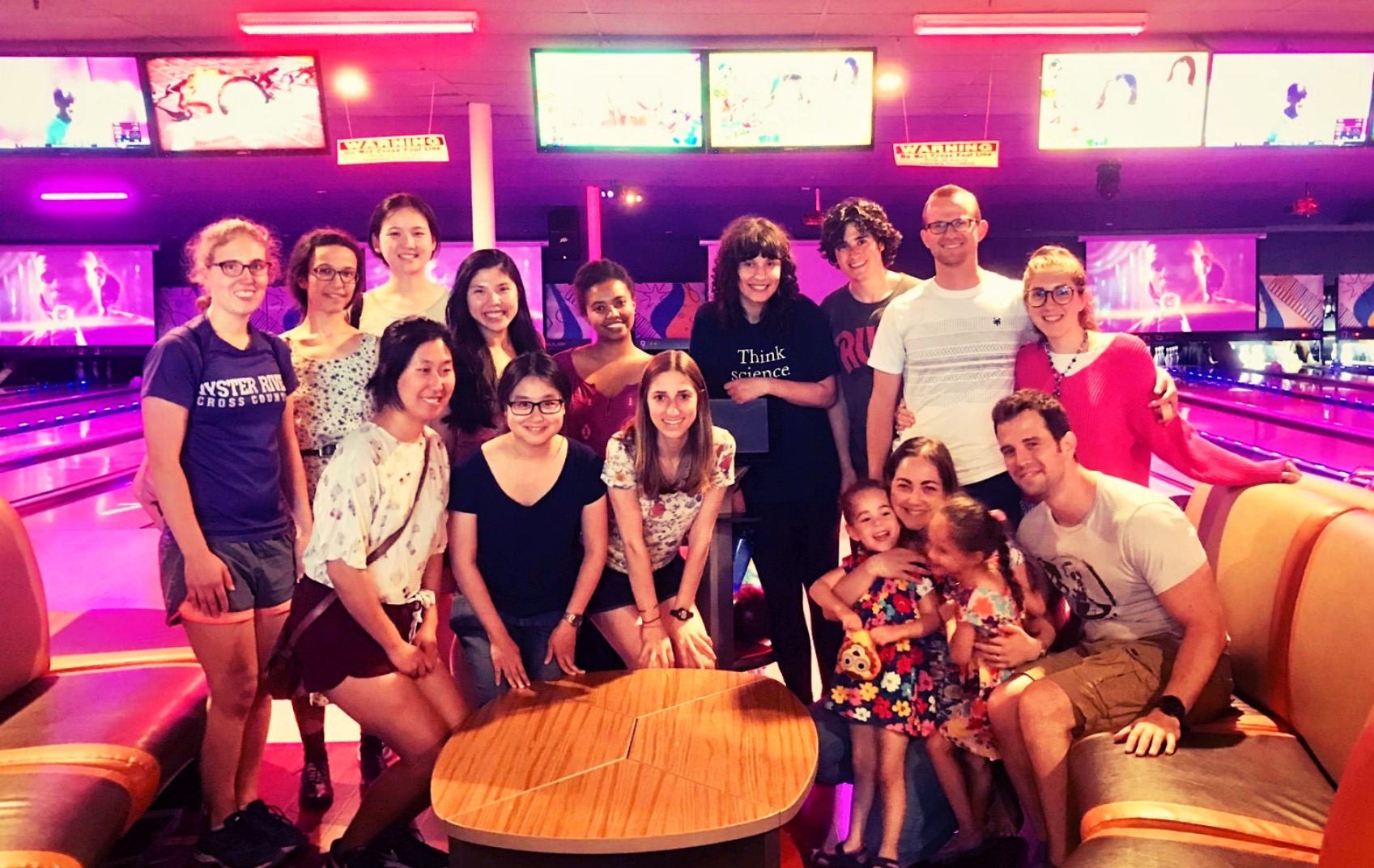 Bowling with fellow graduate students during a weekend activity.

When he’s not in the lab, Clay still likes to challenge himself to “do difficult things.” “Do things you hate,” he said. “Because it gives you the opportunity to learn a lot about yourself.” As a personal challenge, Clay completed a 31 mile run last year, and intends to push past that distance in the near future to further his current physical and mental limits.

He also enjoys practicing the martial art Krav Maga, which served as a good counterpoint to his time in the lab, and has also started taking Chinese language classes in his last year at Princeton. Having a good work-life balance, he said, is important to his success. “When you’re in Princeton, you’re surrounded by departments that are so incredible. You owe your effort at Princeton to those who are not as fortunate to have the opportunities you have here. As you succeed, never forget to turn around and help the next person in line climb the ladder.”