Florence Hudson ’80 always knew that she wanted to have two to three children, and that she didn’t want to stop working. As vice president for strategy and marketing for the Global Industrial Sector for IBM, she found herself taking 7 a.m. conference calls from India and China while her children needed to get ready for school.

“It’s more frustrating for the kids when I’m on a conference call and they can see me, but they can’t have me,” said Hudson, who now tries to keep more separation between work and family. “You really have to think about what works best for you.”

Hudson and other professional women shared their experiences and advice with more than 100 women at the Women in Science & Engineering Conference on Friday, Feb. 10. Undergraduate and graduate students from Columbia, University of Pennsylvania, New York University, Rutgers, and Princeton convened in the Friend Center to learn about leadership skills, career options, and balancing work and home life.

Maria Klawe, dean of engineering at Princeton, opened the conference by telling participants about the evolution of her own attitudes about gender in science. Growing up at a time when it was thought that women cannot do math or science, Klawe thought that she herself was more like a boy than a girl.

“I just thought men’s set of values were the right set of values, and women were just mixed up,” she said. “I figured out this was wrong when I became a manager at IBM at age 30.”

At IBM she realized that all the women in her group had just as much of a right to encouragement in the sciences as she did, regardless of how different they were from herself.

“It’s not so much about gender but about creating a culture that is encouraging towards diversity,” she said.

Hudson was part of a panel with professors and researchers from Columbia, Princeton, Rutgers, the Society of Women Engineers and Penn, who discussed how to balance a career in science and engineering with social and family life. 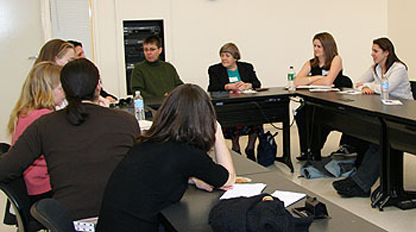 The women have all found time for both work and family, as well as social activities. Nonetheless, they have had to deal with daycare and nanny issues, and have to make adjustments to make everything fit into their schedules.

“It’s our children’s reality that they have working mothers and fathers, and sometimes they just have to get used to it,” said Tal Rabin, head of the Cryptography and Privacy Research Group at IBM.

Another panel discussion focused on career choices, including the pros and cons of academia and industry. Professors from Princeton and Penn contrasted their experiences with researchers at Arup, Google, New York City Transit, and Telecordia Technologies.

Naomi Leonard ’85, professor of mechanical and aerospace engineering, said she enjoys the freedom that her job at Princeton allows.

“This is the kind of place where you really can do whatever it is you want to do,” she said. “The downside is that there are so many things to do.”

Industry researchers also said they have freedom in their jobs. Corinna Cortes, who works in machinery at Google, likes that her industry work is closer to real problems.

“An enormous number of professors come to us and say, ‘Give us a real problem to solve,’ she said. “We have the same opportunities as university professors going to conferences. To me, it’s a no-brainer.”

Connie Crawford, who has bachelor’s and master’s degrees in civil engineering from Princeton, is now chief engineer at New York City Transit, but got to experience both worlds when Princeton hired her to teach bridge engineering in the 1990s.

“Teaching was a wonderful instrument to help me, being in industry,” she said. “I was imparting what I had been learning in industry.”