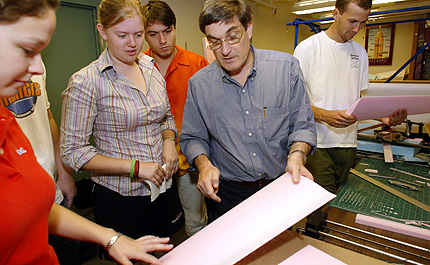 A series of summer workshops is giving mechanical and aerospace engineering majors a chance to dig into subjects they don’t normally see in their regular classes, while having fun with engineering.

“We get to play around,” said Elizabeth Hammar, who will be a junior next year and is helping to organize the workshops. The hour-long sessions allow students to make airplane wings, build circuits and even work on the engine of a Model T Ford. “We’re getting to learn fun, hands-on things that we don’t have time to learn during the semesters.”

The workshops, now in their second year, take place once or twice a week and are geared toward the mechanical and aerospace engineering majors who are on campus for the summer working in faculty labs and doing independent research.

While each workshop has about a half dozen students, the total number of participants over the summer is about 30 said, MAE Professor Michael Littman, who started the workshops.

In a recent workshop, students designed circuits to create a voltage regulator that could be controlled by software commonly used in the sophomore thermodynamics lab. Usually, said Hammar, students just use the software and don’t learn about the circuits that it controls. “We never even touched the circuitry,” she said. “This is a behind-the-scenes peek at some of the equipment we use in lab.”

In two sessions, Prof. Luigi Martinelli led students through the process of analyzing the aerodynamic characteristics of airfoils and using specialized software to make wings out of the foam material that is usually used to insulate walls. Martinelli said students may be able to use the skills to design their own remote-controlled airplanes in their independent research. “It becomes a very natural platform for studying flight systems at a small scale,” he said.

The workshops are an opportunity for socializing as well. The students meet for doughnuts Wednesday mornings and have had a barbecue together. One of the final workshops is a field trip to the Delaware River for a ride on a steamboat – part window into the history of engineering and part pure fun.