The truth about carbon emissions in the United States is far more than inconvenient, it’s terrifying, David Crane, the chief executive officer and president of NRG Energy, told a standing-room-only crowd Dec. 5 at Princeton. 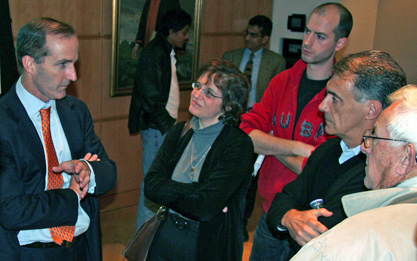 “The time to debate the cause of global warming is over,” said Crane, whose company owns power plants and is the nation’s 10th largest producer of electricity. “The time to decide what to do about it is now.”

This is particularly true, Crane said, because the U.S. is poised to decide in the next two years whether to increase dramatically the number of coal-fired power plants throughout the country. If erected, the plants would add the equivalent of the combined carbon emissions of France and Spain to the U.S. greenhouse gas output, already the largest in the world.

Crane’s talk, “Global Warming, Not Al Gore’s Movie: What are we doing about it? What are you going to do about it?” was the second event in the “Leadership in a Technological World” lecture series, sponsored by the Center for Innovation in Engineering Education.

“As the leader of an energy company, David is on the front lines of this issue from a social, political, economic, and technological perspectives and we welcome the opportunity to learn from him,” said Dean of Engineering H. Vincent Poor in his introduction.

A 1981 graduate of Princeton who also holds a degree from Harvard Law School, Crane served as the CEO of United Kingdom-based bulk power generation company International Power PLC before taking the reins at NRG.

The power-generating sector emits 37 percent of the greenhouse gases in the nation, according to Crane, who previously characterized his industry’s traditional stance on global warming as “See no carbon, hear no carbon, speak no carbon.” Calling himself a modern muckraker, he said power generation companies have a responsibility to deal with global warming as “a moral issue.”

Regardless of whether other power executives agree with his stance – he noted his viewpoint hasn’t earned him invitations to industry cocktail parties – Crane said everyone must face three engineering challenges. The first is to capture and sequester carbon emissions that are separated, pre-combustion, from coal. The second is to capture and mitigate the emissions from existing power plant flues. Third, and equally important, is to approve and build the next generation of nuclear plants.

Crane challenged Princeton students to address these issues and said they are uniquely positioned to do so given their educations and proximity to leading experts in the field of global warming. He praised the strength of the University’s faculty roster, which includes such world authorities as mechanical and aerospace engineering professor Robert Socolow, who received a round of applause from the audience when Crane pointed him out in the first row.

After outlining NRG’s plans to address the challenges ahead, including a goal to add enough capacity to one of the company’s existing nuclear power plants to offset the carbon emissions equivalent of Bulgaria, Crane called on attendees to do much more than shrink their personal “carbon footprints,” which is a person’s total contribution to carbon emissions through energy consumption and other activities.

Despite the attention received by “An Inconvenient Truth,” former Vice President Al Gore’s film about global warming, Crane said the movie may not have gone far enough in pushing personal responsibility for solving the problem.

Just as John F. Kennedy and Martin Luther King Jr. offered visionary leadership for Project Apollo and the civil rights movement, Crane said the next generation of leaders must educate and inspire not only the nation, but the world, to unite in a quest to stem carbon emissions and global warming.

“It’s time to proactively exercise your rights as an informed citizen,” he said, challenging each member of the audience to do their part to change the world.

The lecture series continues April 5, 2007, with a talk by Anne Mulcahy, chairwoman and chief executive of the Xerox Corporation. The series is made possible by generous support from the William Pierson Field lectureship.