On Tuesday, Jan. 9, hundreds of young scholars solved engineering problems, conducted detailed scientific experiments – and launched a catapult attack on a small castle in the lobby of Jadwin Gymnasium. The budding scientists were participants in a regional tournament of the New Jersey Science Olympiad, a hands-on science competition that assesses scientific knowledge and ability, hosted by Princeton University.

Throughout the day, participating middle and high school students interacted with members of the University faculty, staff and student body, who volunteered their time to organize and run the all-day event. From writing challenging test questions to constructing elaborate experimental set-ups, many University authorities in the sciences and engineering shared their knowledge and abilities to provide an engaging and enjoyable experience for the adolescents.

“We’re trying to do anything we can do to promote science and engineering education for American kids,” said Michelle Christy, director of the Office of Research and Project Administration, which organized the tournament. At the same time, the event provided an avenue for the numerous University community members who have volunteering “in their genetic makeup” to give back to the surrounding community, she said. “Our informal motto is ‘Princeton in the Nation’s Service’ – helping out is an important part of who we are.”

Take Mike Vocaturo, for example, the manager of the Fluids and Thermodynamics Lab in the department of mechanical and aerospace engineering who offered his time to construct a pulley system, jackscrew and inclined plane for part of the competition titled “Simple Machines.” 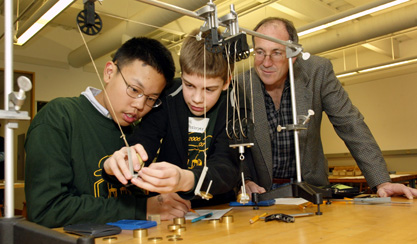 “It’s nice to give back to the community, and it’s a lot of fun,” he said, strolling among the students in McDonnell Hall as they furiously calculated torques and efficiencies to answer questions prepared for them by Princeton undergraduates.

Downstairs, entrants to the Tower Building event tested their creations under the watchful eyes of Roland Heck, associate dean for administration in the School of Engineering and Applied Science, and Mark Dobossy, a postdoctoral research associate in the department of civil and environmental engineering. 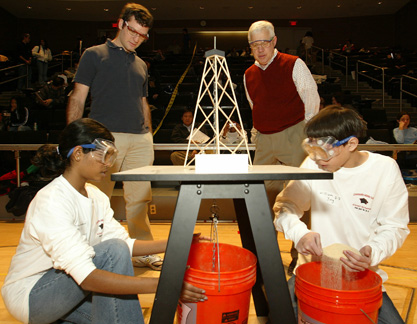 “There’s some creativity here,” Heck said admiringly of the carefully built towers, which must meet strict specifications and support many times their weight without breaking. The Science Olympiad tournament, sponsored by the Research and Development Council of New Jersey and co-sponsored by the University, offered the veteran educator another chance to share his love of engineering with the next generation of scholars. “I’ve taught courses on structures and engineering, and I love working with young people, so this is a great opportunity,” he said.

Area teachers who coached the hard-working teams were similarly pleased that the competition was held at Princeton. Robert Chesbro and Patricia Sowa, eighth-grade science teachers from Montgomery Upper Middle School, said it was a wonderful opportunity for their students to interact with people who clearly love science.

Winning teams, calculated based on cumulative scores from all events, will advance to the March state finals at Middlesex County College in Edison, and top finishers will advance to the national finals at Wichita State University in Kansas. The Science Olympiad was created 23 years ago to provide an alternative to traditional science fairs and includes members from 14,000 schools in all 50 states, Mexico and Canada.