If asking students to design an airplane doesn’t seem challenging enough, how about a supersonic jet? No, how about a “global hyperliner,” a vehicle that could carry a person out of the atmosphere and nearly halfway around the world in three hours?

That is the challenge that Kevin Bowcutt, the chief scientist of hypersonics for Boeing, put to a class of 35 Princeton students this semester. A visiting lecturer of mechanical and aerospace engineering, Bowcutt created a supercharged version of the department’s capstone “Aircraft Design” course. He divided the class into competing teams and assigned a design task that even he and his most advanced colleagues have only begun to investigate. 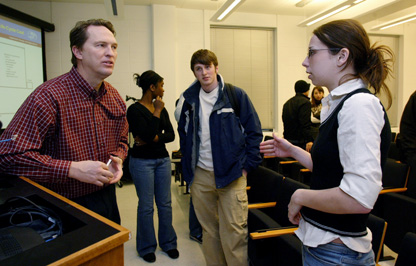 “The students are ahead of me,” said Bowcutt. “I’ve done a lot of hypersonics work, but I’ve never even had the funding to do what they’re doing. I’ve pushed them out to the very forefront.”

It’s not just an exercise in technical speculation. Bowcutt arranged for the final projects to be judged by a formidable panel of outside experts, including the chief scientist for the Air Force, and leading researchers from NASA, Johns Hopkins University, the Air Force Research Laboratory, as well as Boeing and other corporations.

Bowcutt also sees a hypersonic transport (traveling more than five times the speed of sound) as a major business opportunity. He estimated that a three-hour ride might cost five to 10 times more than first-class airfare but 200 times less than the $20 million that private “space tourists” have paid to travel to the International Space Station. The customer would experience weightlessness, sense the blackness of space and see the curvature of the Earth. Jumpstarted by that initial market, hypersonic travel could ultimately find many practical uses in industry, space exploration and national defense, Bowcutt said.

Like the department’s regular aircraft design course, this semester’s version is set up as a design competition and is divided into two phases. First, seven teams of five students carried out initial design explorations to come up with general concepts for the vehicle. At the end of March, each team presented its plan and a panel of judges from the department faculty and Boeing selected three projects for further development. Three larger recombined teams then went back to work to prepare for final presentations in May.

For students, the course has been both exciting and very challenging.

“Such a complex optimization problem as the design of an aircraft with so many interdependent components, coupled with the unstructured nature of innovative design makes the process at times tremendous,” said Szymon Plucinski, a junior.

Landis Stankievech, also a junior, said his previous textbooks had only touched on hypersonics. “So a lot of this stuff we are learning on the fly, and it’s kind of amazing,” he said. “Prof. Bowcutt will pull equations out of his head if someone asks a new question he hadn’t considered before. That just shows how much he’s handled this before. He’s on top of his game.”

Bowcutt acknowledged that the course demands a lot from students. “They have all the fundamentals times 10,” he said. “They have to worry about all the stuff conventional planes do-take off and landing-but they also have to think about supersonics, thermal protection, hypersonics, advanced propulsion‚Ä¶”

Luigi Martinelli *87, who usually teaches the aircraft design course, said that open-ended projects are an essential feature of the class, a key transition from textbook learning to independent work. “They lose the comfort of the answer at the back of the book,” Martinelli said. “But in this case there isn’t even anything out there flying that they can compare it to.”

Princeton historically has benefited enormously from exploring somewhat speculative ideas about space travel, said mechanical and aerospace engineering professor Richard Miles, a hypersonics expert who has known Bowcutt for many years and encouraged him to teach the course. In 1948, the Guggenheim Foundation established Jet Propulsion Centers at Princeton and the California Institute of Technology with one goal being the creation of a rocket-based mail carrying system. The idea itself did not pan out, but the Guggenheim center was a significant factor in propelling the Department of Mechanical and Aerospace Engineering to world prominence, Miles said. Coming full circle, the essence of Bowcutt’s course is closely aligned with the original Guggenheim Foundation goal.

Regardless of research and technology that might emerge from the effort, Bowcutt’s course is already yielding myriad educational benefits. “The part which is both most fun and most challenging is when the students come to see me with questions that I can’t answer,” said Milos Ilak, a graduate teaching assistant. “It is a bit frustrating to have to say ‘I don’t know,’ but the next thing you say is ‘Let’s sit down and think about it.’ It ends up being a learning experience for both me and them.”