On Aug. 1, 2007, the I-35 bridge over the Mississippi River in Minneapolis collapsed, plunging rush-hour traffic into the water below.

In the following essay, reprinted from The New York Times, David Billington ’50 explores the important role that good design plays in the lifetime and safety of bridges. Billington is Princeton’s Gordon Y. S. Wu Professor of Engineering and directs the Program in Architecture and Engineering.

As many have pointed out, the deadly bridge failure in Minneapolis was symptomatic of a system of bridges that will continue to corrode, crack and crumble if not maintained. But maintenance is not the only problem. We also need to design and build better bridges. 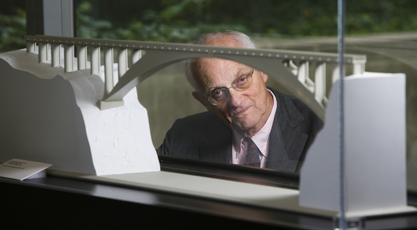 The I-35W bridge was of a type called a “truss deck” bridge; of the 760 bridges around the country having the same design, the Federal Highway Administration found 264, or 35 percent, to be structurally deficient in 2006. Of the bridges having a similar “truss thru” design, 58 percent were labeled deficient. By comparison, only 13.4 percent of the nearly 600,000 bridges of all types were found to be structurally deficient.

While we don’t know yet exactly what caused it, the Minneapolis collapse is hauntingly similar to the collapse in 1983 of another interstate highway bridge over the Mianus River in Connecticut. That disaster led to inspections of similar bridges, which found dangerous cracks from deferred maintenance. What the Mianus and Minneapolis bridges had in common was not just neglect. Both were the products of a design mentality in which engineers simply used a standard form, and often the same detailed features. Public bridges are all too often designed by anonymous teams, and the results can be seen on our highways.

The goal of good bridge design is to integrate efficiency, economy and elegance in a single design. Few bridges built over the last century have achieved this. Most are efficient but strictly functional; a few that aspire to elegance have done so at the expense of efficiency and economy, like the new San Francisco-Oakland Bay Bridge, which is estimated to cost more than four times its original budget.

Having given seminars to many state bridge engineers, I am aware of the political pressures they face to control costs. But there are often opportunities to improve design even in the case of very ordinary bridges. For example, a few years ago, in a discussion with bridge engineers from a Midwestern state, I suggested an alternative to a conventional overpass they had built, only to be told it would have cost too much. Challenged, I redesigned the overpass myself, and sent the plan to a steel fabricator the state worked with. The fabricator did a cost analysis and, to everyone’s surprise, found that my version would have cost slightly less than the standard design. The revision was also, in my view, better looking.

American bridge engineering largely overlooks that efficiency, economy and elegance can be mutually reinforcing ideals. This is largely because engineers are not taught outstanding examples that express these ideals. Elsewhere, however, there is a great history of such integrated education. In the early and mid-20th century, two professors at the Federal Institute of Technology in Zurich-first Wilhelm Ritter and then Pierre Lardy-used that broader approach and turned out such eminent designers as Robert Maillart and Christian Menn, experts in reinforced concrete, and Othmar Ammann, who worked in structural steel.

Maillart never built in the United States, but Ammann designed several immense spans in the New York City area, including the George Washington, Bayonne, Bronx-Whitestone and Verrazano-Narrows Bridges. Professor Menn is generally considered today’s greatest practicing designer, and his Leonard P. Zakim Bunker Hill Bridge in Boston has become a symbol of that city in the four years since its opening.

The goal of these three designers was always to create long-lasting bridges disciplined by the conservation of structural materials and public money yet with great visual appeal. This is why photographs and models of their bridges are the only works of structural engineering regularly exhibited in art museums.

Good design need not be limited to giant projects. An example was the design competition in 1989 for the United States Naval Academy Bridge in Annapolis, Md., organized with the help of Professor Menn. It was patterned after the Swiss practice of having public juries of experts and citizens evaluate designs, and the result was an efficient and elegant bridge for essentially the same amount of money that a standard design would have cost.

In the end, it is to the credit of state bridge engineers that despite their tight budgets, there have been relatively few fatal collapses caused by structural deficiencies. However, more money, better maintenance and new regulations will not be enough to change things if new bridges are no better than the ones they replace. The public and our elected officials must learn to see bridges-of all sizes and in all locations-as more than just utilitarian objects. Bridges should be cared for in the way we treat works to which we have an emotional attachment as well as a physical need.

A 2000 report by the Federal Highway Administration indicated that an average of about 2,500 new bridges are completed each year; each could be an opportunity for better design. The best will be elegant and safe while being economical to build.

The key is to require that every bridge have one engineer who makes the conceptual design, understands construction and has a strong aesthetic motivation and personal attachment to the work. This will require not only a new ethos in professional practice, but also a new focus in the way engineers are educated, one modeled on the approach of those Swiss professors, Wilhelm Ritter and Pierre Lardy.

The first opportunity to move toward this new outlook will be in choosing the replacement design for the Minneapolis bridge. I would urge the State of Minnesota to organize a jury of public officials, engineers and community leaders to recommend a design after a holding a competition along the lines of the one in Annapolis.

We have a choice: we can replace the standard-form truss with another bland and anonymous work, or we can come up with an efficient and elegant form that helps engineers educate the public in the possibilities of turning our nation’s bridges into safe, economical and beautiful landmarks worth maintaining.

One bridge doesn’t fit all