Rachel Sealfon spent her senior year as a detective hot on the trail of a major public enemy-Plasmodium falciparum, the deadliest malaria-causing parasite. 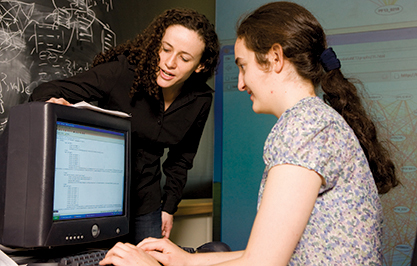 A computer science major, Sealfon used novel techniques to combine and analyze clues from 22 data sources to predict the functions of unknown genes in the parasite. She was particularly interested in genes that code for proteins may cause diseased cells to “stick” to other cells, making them less likely to be cleared from the blood stream.

Forty percent of the world’s population lives with the constant threat of malaria infection, which strikes more than 500 million people each year. More than 60 percent of P. falciparum’s roughly 5,300 genes are of unknown function.

“My experiences with engineering classes at Princeton have transformed my educational goals,” Sealfon said. “I never would have imagined studying computer science when I started out at Princeton. I was interested in biology.”

Her thinking began to shift after she took introductory computer science classes her freshman year and then worked the following summer in the laboratory of Olga Troyanskaya, an assistant professor of computer science and the Lewis-Sigler Institute for Integrative Genomics.

Sealfon is the winner of the 2008 Outstanding Undergraduate Female Award from the Computing Research Association, based on her stellar academic performance and demonstrated research capabilities. She is the lead author on a paper published in the journal BMC Bioinformatics that describes a tool developed in Troyanskaya’s lab for extracting information from the multi-institutional Gene Ontology project.

“This project demonstrates Rachel’s versatility and amazing promise as a researcher- she is able to address both a challenging computer science problem and an exceptionally important biomedical problem,” said Troyanskaya.

Sealfon went on to test some of her predictions in the lab of Manuel Llinas, assistant professor of molecular biology and the Lewis- Sigler Institute for Integrative Genomics.