Raleigh Martin made sure nothing was lost in translation when he used his expertise in Chinese language and culture to further his technical research on air pollution and precipitation in Beijing. 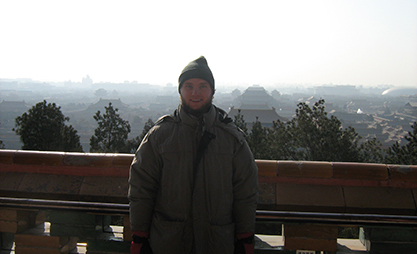 A senior majoring in civil and environmental engineering, Martin investigated whether particulate pollutants suppress precipitation in the city of Beijing. Using an atmospheric model, he assessed whether human-made aerosols-which are fine particles of solids or liquids suspended in the air-make it difficult for rain drops to form. Martin, who earned a certificate in East Asian studies, also examined the extent and success of cloud seeding programs in and around Beijing.

“Pursuing the Program in East Asian Studies has given Raleigh an important cultural perspective on the scientific and technical problems that he is addressing,” said Martin’s faculty adviser James Smith, a professor of civil and environmental engineering. “He has also utilized his Chinese language skills to great advantage in accessing Chineselanguage research and in direct interactions with our collaborators at the Institute of Atmospheric Physics in Beijing.”

Martin spent the 2005-2006 academic year studying abroad at Nanjing University in Nanjing, China, the capital of the Jiangsu province located on the Yangtze River. The experience, funded by the East Asian Studies Program, enhanced his Chinese language capabilities and his understanding of the conflict between Confucian and Taoist philosophies.

“My courses on Chinese language, history, and culture have taught me to appreciate these Chinese philosophical ideas and what they mean to engineering,” he said. Returning to Princeton, Martin sought a project focusing on water resources issues in China, which suffers from chronic water shortages. “Tying the study to Beijing, where pollution and water are very important issues, definitely adds relevance and motivation to the project. However, it also makes it much more challenging, because getting data about China is much, much harder than getting data about the United States.”

Smith agreed, saying that he has encountered similar logistical challenges over the years. Though difficult, these hurdles provide yet another valuable educational experience to students, he said.

Next year, Martin plans to attend graduate school in earth and environmental science at the University of Pennsylvania to study rivers and water resources.