One hundred New York City high school girls screamed in unison as they watched a tower built out of spaghetti collapse into a heap.

Gathered in New York University’s Kimmel Center on May 5, the students-a mix of ninth and tenth graders from public and private schools-were participating in a towerbuilding competition as part of a day-long expo designed to introduce them to engineering.

“They were so into the competition-the energy in the room was insane,” said electrical engineering graduate student Sharon Goldberg, president of Princeton’s Graduate Women in Science and Engineering organization, which co-organized the event with NYU’s Women in Computing group. 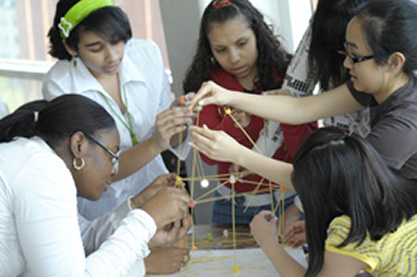 The event is an outgrowth of an engineering colloquium offered for the past three years by Princeton Engineering’s undergraduate affairs office and the National Coalition of Girls’ Schools.

“The U.S. economy is not competitive with other countries in terms of science and engineering,” Goldberg said. “One of the places that we have a problem is that students aren’t entering engineering programs, and there’s a definite lack of women. We wanted to break a stereotype and convince these girls that women really do engineering.”

The organizers chose to focus on younger high school students who are in the process of making decisions about whether to continue studying science in their junior and senior years.

“Starting in 12th grade is the wrong time,” Goldberg said. “It needs to be earlier.”

The day began with a welcome from Goldberg and Shaila Musharoff, a graduate student at NYU, followed by opening remarks by Margaret Wright, chair of computer science at NYU. The girls were then briefly introduced to different engineering fields before Princeton’s Associate Dean for Graduate Affairs Stephen Friedfeld delivered a keynote on getting in to engineering programs. Before the spaghetti-tower-building competition, a series of graduate students, including Rebecca Fiebrink and Bernice Rosenzweig of Princeton, gave presentations and demonstrations about their engineering research. Fiebrink mesmerized the girls with a presentation on computer music and how to visualize sound, while Rosenzweig captured their interest as she discussed environmental engineering.

“It was great to see how interested and motivated a lot of the students were and to have an opportunity to interact with them,” said Rosenzweig, who herself graduated from E.R. Murrow High School. “It was also really great to work with their teachers, who all had to put in a lot of extra work for the students to attend the event. You could tell that they had a real interest in their students’ progress.”

The expo concluded with the tower competition, which challenged the students to build the tallest tower possible using only uncooked spaghetti noodles and gumdrops. The winning entry, built by students from Hunter College High School, was three and a half feet tall.

“In the end, I feel like this type of event could really have a major impact in shaping the careers of a few of the students present,” Rosenzweig said. “And it put all of the girls present on the same playing field as boys or students from schools with more resources in knowing that a career in engineering is a possibility for them and what they need to do to prepare for it.”