Just months before world leaders are scheduled to meet to devise a new international treaty on climate change, a research team led by Princeton University scientists has developed a new way of dividing responsibility for carbon emissions among countries.

The approach is so fair, according to its creators, that they are hoping it will win the support of both developed and developing nations, whose leaders have been at odds for years over perceived inequalities in previous proposals.

The method is outlined in a paper, titled “Sharing Global CO2 Emissions Among 1 Billion High Emitters,” published online in this week’s Proceedings of the National Academy of Sciences. According to the authors, the approach uses a new fairness principle based on the “common but differentiated responsibilities” of individuals, rather than nations. 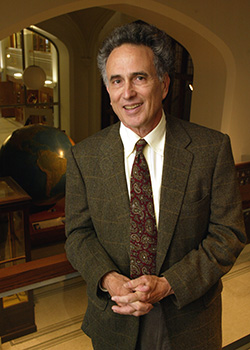 “Our proposal moves beyond per capita considerations to identify the world’s high-emitting individuals, who are present in all countries,” the team says in the introduction. The authors include Stephen Pacala, the Frederick D. Petrie Professor of Ecology and Evolutionary Biology, and Robert Socolow, a professor of mechanical and aerospace engineering. Pacala and Socolow’s concept of “stabilization wedges,” a strategy that proposed concrete ways to prevent global emissions of greenhouse gases from rising for the next five decades, was featured in “An Inconvenient Truth,” former Vice President Al Gore’s 2006 film about climate change. The concept has given the climate change policy community a common unit for discussing how to reduce emissions and for allowing a comparison of different carbon-cutting strategies.

The lead authors on the paper are physicist Shoibal Chakravarty and economist Massimo Tavoni, both research scholars at the Princeton Environmental Institute, which is the University’s interdisciplinary center for environmental research, education and outreach.

“The team worked together to formulate a novel approach to a long-standing and intractable problem,” said Pacala, who is also director of the institute.

The proposal would use individual emissions as the best, fairest way of calculating a nation’s responsibility to curb its output of carbon dioxide, the authors said. The methodology does not mean that individuals would be singled out, only that these calculations would form the basis of a more equitable formula. Some present strategies that employ averages of energy use in a country are widely regarded as unfair, the authors say, because such efforts mask the emissions of wealthy, high polluters. 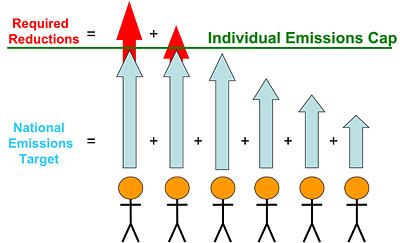 In the new scheme, emission reduction targets for each country are calculated in a multi-step fashion. The researchers used a strong correlation between income and emissions to estimate the emissions of individuals in every country. Next, they combined these factors to see how individual emissions are distributed globally.

Looking forward to 2030, the researchers estimated first individual emissions and then a global emission total at that future time based on projections of income, population and energy use. They imagined the world’s leaders deciding now that the projected global emission total for 2030 is dangerously high, choosing a lower global target and seeking a process by which the work of achieving this new global target could be divided among the world’s nations.

The proposal “provides a significant starting point for breaking through the current impasse over the respective mitigation responsibilities of developed and developing countries,” said Robyn Eckersley, a professor in the School of Social and Political Sciences at the University of Melbourne in Australia who specializes in environmental politics and political theory.

The researchers believe their new framework is useful in that it establishes a uniform “cap” on emissions that individuals should not exceed. If, for example, world governments agreed to curtail emissions so that carbon levels in 2030 are approximately at present levels, then, according to the researchers’ calculations, the necessary reductions in global emissions could be achieved if no individual’s emissions could exceed about 11 tons of carbon dioxide a year. By counting the emissions of all the individuals who are projected to exceed that level, the world leaders could provide target emissions reductions for every country. For this specific example, there will be about 1 billion such “high emitters” in 2030 out of 8.1 billion people.

At present, the world average for tons of carbon dioxide emitted a year per individual is about five. Each European produces about 10 tons a year, with each American producing twice that amount.

“These numbers strengthen our conviction that industrialized countries will have to take the lead in reducing their emissions, but that the fight to prevent dangerous climate change can only be won if all countries act together,” said Ottmar Edenhofer, the chair of Economics of Climate Change at the Technical University Berlin and co-chair of Working Group III of the Intergovernmental Panel on Climate Change (IPCC). The IPCC was created by the U.N. General Assembly in 1988 to provide objective policy advice in response to the growing concern about the risk of climate change. The working group is assessing options for mitigating climate change through limiting greenhouse gas emissions.

The new research paper shows that it is possible to reduce poverty and cut carbon emission at the same time. The authors calculate that addressing extreme poverty by allowing almost 3 billion people to satisfy their basic energy needs with fossil fuels does not interfere with the goal of fossil fuel emissions reduction. The cap would need to be somewhat lower, and high emitters would need to reduce their energy consumption by a slightly larger percentage to make up the difference.

World leaders are expected to meet in Copenhagen in December 2009 for a conference to negotiate a treaty on global emission reductions to address climate change. The 1992 United Nations Framework Convention on Climate Change called upon the developed nations to reduce carbon emissions and provided the impetus for the binding 1997 Kyoto Protocol, but established no time frame for developing countries to follow. Developing countries now contribute more than half of global emissions, a share that is growing at a fast pace, Chakravarty said.

“U.N. rules and customs make it difficult for the international community to examine what is going on inside countries. That’s probably why our simple proposal based on individual emissions has not emerged from the diplomats,” Socolow said. “Over the next several decades, global environmental rulemaking will need new wisdom to accommodate developing countries whose per capita data belie the presence of both large populations of the very poor and upper and middle classes that are major consumers of resources. Our proposal is a start down this road.”

The work is part of the Carbon Mitigation Initiative, which is based at Princeton. Launched in 2000, the project has produced new practical approaches to managing the carbon dioxide emissions that contribute to global warming. The initiative is aimed at supporting fundamental scientific, technological and environmental research that would lead to safe, effective and affordable solutions to climate change.

The authors believe the paper will be of relevance to climate negotiators as well as those forming national policies.

Other authors on the paper are: Ananth Chikkatur at Harvard University; and Heleen de Coninck at the Energy Research Centre of the Netherlands.

“This paper is an example of what Princeton does best,” Pacala said. “It represents a collaboration among young people from disparate disciplines — physics, economics, political science. I’ve enjoyed being a kibitzer.”